END_OF_DOCUMENT_TOKEN_TO_BE_REPLACED

Kid Blue, completed more than a year ago, enjoyed a belated and unsuccessful release and arrived in the Jet City even later. Reportedly Twentieth Century Fox advertised the picture as a straight western somewhere in the country and failed to find an audience for it (whatever audience they did reach with such a pitch would surely have been grievously disappointed). The film and the rest of the nation will have a second chance to get together after a New York Film Festival showcasing offers a proper reintroduction. Meanwhile, the Harvard Exit has scored another audience coup—not so spectacular as with such earlier previously-ignored-elsewhere pix as The Conformist, Taking Off, and The Emigrants, but not bad at all. Unfortunately the sizable weeknight audience I saw the film with tended to turn on at just those places where the filmmakers lost either perspective or their artistic souls.

END_OF_DOCUMENT_TOKEN_TO_BE_REPLACED

Private Property (Cinelicious, Blu-ray+DVD) – Put this 1960 film in the “Lost and Found” category. The directorial debut by Leslie Stevens, a playwright and screenwriter and protégé of Orson Welles, it’s a neat little sexually-charged psychological thriller set in the sunny California culture of affluence and trophy wives and drifting hitchhikers crossing the stratified social borders.

Corey Allen and Warren Oates are Duke and Boots, the George and Lenny of angry drifters, and Kate Manx is the beautiful trophy wife that Duke spots on the Pacific Coast Highway in a white Corvette. They coerce a travelling salesman to follow that car and trail her to her Hollywood Hills home, taking up residence in a vacant home next door. They ogle her through the second floor window as Anne sunbathes and skinny dips, and then they insinuate themselves into her home. A student of the Method school, Allen plays Duke as an angry young con man who has perfected the sensitive soul act, while Manx, who was Stevens’ wife at the time, is a limited actress who Stevens directs to an effective performance. Oates is the revelation, walking that tightrope between loyalty and suspicion, slowly figuring out Duke’s games but slow to act until practically pushed into action.

END_OF_DOCUMENT_TOKEN_TO_BE_REPLACED

These discussions are held in the screening room of Scarecrow Video on the second Friday of every month and are free to attend. The video appears a few weeks later on the Seattle Channel.

The September edition will take place on Friday, September 9 at 7pm at the Scarecrow Video Screening Room. More information at the Framing Pictures Facebook page.

John Dillinger was the most notorious of the Depression-era gangsters and his exploits (and attendant newspaper coverage) made him a romantic anti-hero to many of the folks who felt betrayed by the bankers and businessmen of the country. 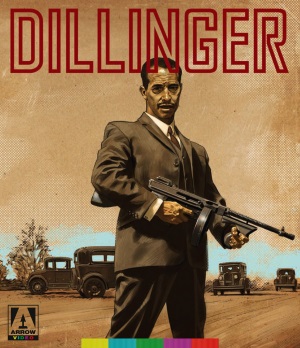 Dillinger (Arrow, Blu-ray+DVD), the 1973 gangster film and directorial debut of John Milius, plays on that image of the gentleman gangster who courted the public and the press while he robbed banks across the American Midwest. It was one of the best of the many period gangster films that poured out in the wake of Bonnie and Clyde and made anti-heroes of outlaws.

Warren Oates stars as Dillinger and it is great casting; not only does he resemble the real-life gangster but he brings a rugged charm to the role, whether cautioning bystanders and bank tellers during the robberies (“This could be one of the big moments in your life,” he says at one point. “Don’t make it your last”) or genially bantering with the press after he’s arrested the first time. Ben Johnson plays Melvin Purvis, the Midwest FBI agent who made Dillinger a priority as his fame became an embarrassment for the Bureau. The film covers his brief rampage across the Midwest states, his romance with Billy Frechette (Michelle Philips), his flamboyant prison break, the supergang that included Pretty Boy Floyd (Steve Kanaly) and the bloodthirsty Baby Face Nelson (Richard Dreyfuss), and his bloody demise outside of a Chicago movie theater in 1934 in the company of “the lady in red” (played by Cloris Leachman). Harry Dean Stanton, Geoffrey Lewis, John P. Ryan, and Frank McRae co-star as members of Dillinger’s gang through the years and Milius gives them all distinctive parts.

Milius was one of the highest paid screenwriters in Hollywood when he made the film for AIP, taking a cut in exchange for the chance to direct, and AIP (famed for drive-in pictures) poured money into this film in hopes of a mainstream breakthrough and a little prestige. Though small by studio standards, it was the biggest budget of any AIP picture to that time and Milius creates a terrific evocation of the era and delivers impressive action scenes, shoot-outs, and car chases on a tight budget.

Arrow’s edition is restored in 2K from the original 35m interpositive and features both Blu-ray and DVD versions of the film with commentary by film historian Stephen Prince and new interviews with producer Lawrence Gordon (10 minutes), director of photography Jules Brenner (12 minutes), and composer Barry De Vorzon (12 minutes), plus an isolated music and effects track and bonus booklet.

That our final glimpse of John Dillinger should be out of focus is appropriate. Dillinger promised to be an exciting directorial debut for John Milius—promised especially hard in the first quarter of an hour—and the role of Dillinger himself presented Warren Oates with the perfect opportunity to etch one of the great characterizations of the American screen, as well as to win widespread recognition at long last. That Oates has failed to achieve either scarcely seems his fault since, whenever he is given screen time, he hovers on the verge of discovering a dangerous and original persona—and, it must be added, he looks historically perfect, unsettlingly so. But Dillinger and anyone else resembling a character are essentially lost sight of, except as gunmen and targets, from about the midpoint of the film onward—that is, starting with the Mason City, Iowa, massacre. The mayhem is powerfully filmed and individual shots are often vividly visualized, but Milius fails completely to give sequences or whole sections of the film any cohesion or sense of purpose beyond slam slam slam.

END_OF_DOCUMENT_TOKEN_TO_BE_REPLACED

Art, because it creates its own reality, can’t be self-deluding, no matter how “unreal” it may seem. What it can do is distort reality by rearranging life’s subject matter into new and unfamiliar forms. Thus, in Badlands, Terrence Malick’s first directorial project, Kit Carruthers’ personal fantasy is distinct from Malick’s artistic fantasy, although the two run closely parallel and indeed often seem inseparable. Kit (played by Martin Sheen) insulates himself within the brash shield of a James Dean tough-guy image to the point where, by the end of the movie, all he is concerned with is going out in style. Reality, for Kit, ultimately becomes irrelevant, just as, in a similar sense, our normal conceptions of what goes on in the world apply less and less to what we are seeing on the screen as the movie progresses.

END_OF_DOCUMENT_TOKEN_TO_BE_REPLACED

At times one feels that the elemental motions induced by the instinct to survive almost dictate a pace of their own in this movie about the initial contact between a group of nomadic Eskimos and the English-speaking world back in the days when New Bedford sailors scoured the northern reaches of the continent in search of whales. There is a certain natural sense of episodic movement in the migration of a people from one village site to another as the food supply runs low and new, richer hunting grounds must be found. There is an ease and unhurriedness in the way the camera lingers on the things Eskimos really do (or did) with their time which avoids being static because it’s really pretty interesting, whether we are witnessing the hunting of seals or the building of an igloo or the ritual pairing-off of couples following an evening of vaguely familiar-seeming games and frenzied dancing by a few of the local boys decked out in antlers. Even without the story of three sailors who are stranded somewhere in Baffin Bay and subsequently rescued by Eskimos, this would make an engaging documentary on a foreign culture; and in fact it is so difficult not to be genuinely moved by the warmth and humanness which flows so generously from The White Dawn that one is tempted to believe it a better film than, perhaps, it is.

END_OF_DOCUMENT_TOKEN_TO_BE_REPLACED

After witnessing a satanic episode of black rites and human sacrifice in some out-of-the-way Texas campsite and then trying in vain to get some action on the matter from the local police force, Peter Fonda remarks to Warren Oates, “Frank, they’re trying to screw with our brains.” Fonda’s face is dead earnest as he delivers the line, which seems like some wildly misplaced throwaway from a grade-Z science fiction flick, invested with about as much foreboding as an order for ham and eggs. It may be significant that he doesn’t say anything like, “They’re trying to fuck with our heads,” which might be edging a little too far in the direction of counter-kultcha lingo; after all, we don’t want to alienate anybody out there who might actually be getting off on Race with the Devil—an apt title indicating Starrett’s dual concentration on spooks and chases. Like a liberal politician, “screw with our brains” is restrained even in its most daring affectations of looseness, and its timidity is only accentuated by the ex-hip aura of Fonda, who’s getting a little older and a little safer than the free-spirited threat to conservative lifestyles Captain America represented in Easy Rider.

END_OF_DOCUMENT_TOKEN_TO_BE_REPLACED

Anyone seeking evidence that more writers should turn director ought to consider Tom McGuane in quarantine. 92 in the Shade has about as much structure and consistency, not to say appeal, as an ice cream sandwich that has lain in the sun since last weekend. There is scarcely any evidence that someone directed it, although a manneristic and absolutely pointless derivation from some better movie—e.g., a drifting Long Goodbye–like coverage of a jailhouse interview between Peter Fonda and Warren Oates—suggests occasionally that someone thought he was directing. Perhaps the shade of Robert Altman also hangs over the non-readings one strains to make sense of (though I stopped straining before very long); McGuane must have assumed that mumbled, slurred speech—preferably delivered through a mouth full of food and/or drink—has some near-mystical value in the contemporary cinema, else why would he sabotage so much of his own dialogue? But even on that level, the screenplay sounds like someone else’s idea of McGuane dialogue more often than it approaches the real thing (as, delightfully, in Rancho Deluxe).