This film magazine/blog, a collaboration of a small group of Seattle-based film critics, went live on August 14, 2008. To celebrate our first anniversary, we pay tribute to the film that inspired the name with archival pieces by our contributors.

13 Ways of Looking at The Parallax View by Robert Cumbow

The Parallax View: An Introduction by Sean Axmaker

on DVD available at Amazon

Parallax View is a loose collective of like-minded professional film writers in the Seattle area. We like to get together and talk about cinema. This site is a place to put some of those discussions, as well as essays, reviews, interviews and other thoughts on movies, out to a wider audience. And hopefully have some fun with it. 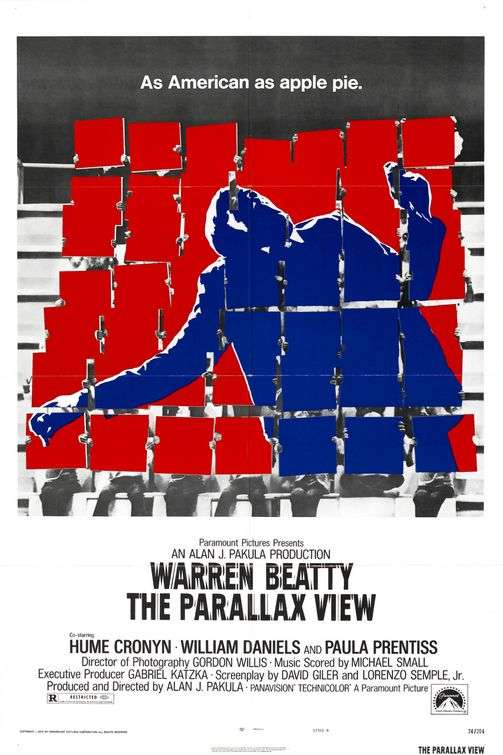 Forget about a recount! There will be no manual tally, no divining of intent, no lost ballots “discovered” behind the polling booth. The Seattle Film Critics have determined in no uncertain terms (okay, there is one tie) their choices for the best films of 2004.

The Puget Sound area’s fourteen most prominent print critics have fallen for the gym-rat nobility of MILLION DOLLAR BABY, naming it their best picture and giving the director nod to Clint Eastwood. We are pleased to encourage this fresh young face in his filmmaking endeavors.

Acting honors went to Jamie Foxx, for his dazzling diddy-bop through the life of Ray Charles, and Imelda Staunton, for her finely-tuned VERA DRAKE portrait of a housewife whose homely ministrations include back-room abortions. Supporting awards went to the lovingly re-discovered SIDEWAYS duo of Thomas Haden Church and Virginia Madsen.

The Seattle Critics Awards are unique in bestowing a “Living Treasure” award, given to a long-cherished movie notable deserving of career recognition. This year’s winner is Henry Bumstead (born 1915), one of Hollywood’s greatest art director/production designers, whose astonishing catalog of films includes VERTIGO, TO KILL A MOCKINGBIRD, TOPAZ, THE STING, HIGH PLAINS DRIFTER, THE FRONT PAGE (74), THE WORLD ACCORDING TO GARP, CAPE FEAR (91), MYSTIC RIVER, and MILLION DOLLAR BABY.

A “Special Citation” for restoration work went to Richard Schickel and Brian Jamieson, for their efforts in restoring 50 previously-unseen minutes to Samuel Fuller’s splendid 1980 film THE BIG RED ONE.

With that, the winners and runners-up in the Seattle Film Critics Awards. See below for voting members.

The Incredibles
Runner-up: Ghost in the Shell 2: Innocence

Richard Schickel and Brian Jamieson, THE BIG RED ONE

The voters in the 2004 Seattle Film Critics Awards:

Jack Valenti be damned! The second annual Seattle Film Critics Awards are here, despite Hollywood’s notorious ban on screeners. Fourteen of the most prominent print critics from the Puget Sound area have voted on the best in the film year, perhaps naively believing that movies should be seen on the big screen anyway.

The Seattle critics, all from print-only publications, handed major awards to small movies–yet found room for hobbits, too. AMERICAN SPLENDOR, the pixillated tale of Cleveland comic-book creator Harvey Pekar, won Seattle’s best picture award. The film’s screenplay, and leading lady Hope Davis, also got the nods in their categories. Meanwhile, Bill Murray won the best actor prize for LOST IN TRANSLATION, which makes us wonder how you say, “Now get outta here, ya knuckleheads” in Japanese.

In a category unique to the Seattle critics, a “Living Treasure” was also named, an award that honors some long-cherished movie notable deserving of career recognition. This year’s award went to Christopher Lee, the magnificently suave and sinister English actor whose work is gloriously associated with Hammer horror films, notably as perhaps the finest screen Dracula. No stranger to straight roles (THE PRIVATE LIFE OF SHERLOCK HOLMES, THE THREE MUSKETEERS), Lee has lately found acclaim in both the newest STAR WARS trilogy and THE LORD OF THE RINGSâ€¦even if he was unceremoniously cut from THE RETURN OF THE KING. (Last year’s “Living Treasure” was Maureen O’Hara.)

A Special Citation was awarded to Rialto Pictures, for their stirring restorations and/or re-releases of a series of French classics in the past year, including LE CERCLE ROUGE, QUAI DES ORFEVRES, and TOUCHEZ PAS AU GRISBI.

Without further ado, the winners of the Seattle Film Critics Awards:

American Splendor
Runners-up: The Lord of the Rings: The Return of the King; Lost in Translation

Sofia Coppola, Lost in Translation
Runner-up: Peter Jackson, The Lord of the Rings: The Return of the King

Sean Astin, The Lord of the Rings: The Return of the King
Runner-up: Peter Sarsgaard, Shattered Glass

The Man on the Train (France)
Runner-up: The Man Without a Past (Finland)

The Lord of the Rings: The Return of the King (Andrew Lesnie)
Runner-up: Girl With a Pearl Earring (Eduardo Serra)

Critics voting in the 2003 awards:

Alarmed by the dearth of year-end movie awards, the film critics of the Puget Sound area have raised their voices in unison for the first time. Twenty-four of the area’s top critics have been polled for the first annual Seattle Film Critics Awards, and the results are in.

The Seattle critics also created a special annual category, the “Living Legend” award, which honors some long-cherished movie notable deserving of career recognition. This year’s award went to Maureen O’Hara, the Irish-born, flame-haired Hollywood star whose long career included her many collaborations with both John Wayne (THE QUIET MAN) and John Ford (HOW GREEN WAS MY VALLEY).

The awards were organized by a new Seattle organization, Parallax View: A Film Society, a group of film enthusiasts, professionals, and critics. The members of Parallax View are NOT the voters in the awards. A committee formed by Parallax View polled the area’s leading critics.

Herewith, the results of the 2002 Seattle Film Critics Awards:

Far From Heaven
Runner-up: The Lord of the Rings: The Two Towers

Todd Haynes, Far From Heaven
Runner-up: Peter Jackson, The Lord of the Rings: The Two Towers

The Kid Stays in the Picture
Runner-up: Standing in the Shadows of Motown

PARALLAX VIEW: A FILM SOCIETY is a newly-formed group of Seattle film professionals, enthusiasts, teachers, and critics. Our goal is to champion the cause of film literacy, foster public discussion of the place of movies in society, and promote the serious, sometimes delirious cause of film as art. To that end, we sponsor public events featuring filmmakers and critics, publish provocative writing about film, and present the annual Seattle Film Critics Awards, voted on each December.