Take it from experience: one of the first questions asked of any Jerry Lewis fan who declares his admiration is, “Do you really find him funny?” The question isn’t as confrontational as it seems; read generously, there’s even a bit of a back-handed compliment in there. Sure, he’s an interesting case study in American celebrity, worthy of attention; the acknowledgement that, depending on the age and viewing habits of the interlocuter, he gave surprisingly supple, moving dramatic turns in The King of Comedy, Wiseguy, Funny Bones; and all right, he made you laugh as a kid. But now? Funny?

Well, I really do and always have. Lewis’s reaction to calamity—the spasmodic efforts at extraction, interspersed by rounds of disturbing calm, building to the burst of apoplectic frenzy that proves as futile as any other measure tried—is as iconic and hilarious as Keaton’s unperturbed fatalism or Groucho’s peevish snipes. Lazy impersonations of Lewis focus on the mania and miss those pauses the perfectionist, preternaturally gifted physical comedian would lace into his bits. A random limb swiftly raised then replaced just as quickly, the intention realized as useless almost the instant it’s conceived; the trailing-off sentence fragments and swallowed coughs, a need to articulate the dilemma strangled by the pointlessness (or impossibility?) of the effort; the childlike defensive stance, crouched so his butt sticks out and face juts forward, and cautious tread—more a single legged-pivot with, somehow, forward momentum—around the problem; the hand briefly cradling the brow beginning to seethe. It’s a magnificent collection of cancelled gestures and never-stated oaths, as if even Lewis’s frustration was being frustrated. And then—and only then, snarky shouters of nasal freundlavens should note—the explosion.

END_OF_DOCUMENT_TOKEN_TO_BE_REPLACED 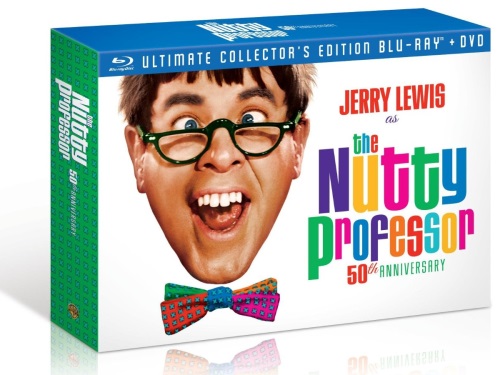 Whether you believe Jerry Lewis is a comic genius, a braying clown, a shrewd show-biz pro who carefully cultivated a popular stage and screen persona, a hopeless egotist with a cringing need for attention, or simply a comic with a gift for manic physical humor that clicked with audiences in the fifties and sixties, most people agree that The Nutty Professor was his greatest film as a director and his most interesting variation on the child-man figure he had transformed into Hollywood gold.

Lewis’ fourth film as a director is a reworking of Robert Louis Stevenson’s Dr. Jekyll and Mr. Hyde brought into the modern world by way of Lewis’ cartoonish take on the institutions and social cultures of contemporary life. His Jekyll is nebbish college professor and chemist Julius Kelp, the child-man of his previous films grown up from boy to adult, no more capable of the social world but clearly educated and perhaps even brilliant. His adenoidal juvenile voice has tempered into something oddly lived in and the spasmodic, childlike body has slowed and slumped into a walking shrug, acknowledging his inability to take on the world on its own terms. Julius is smitten with Stella Purdy (Stella Stevens), a curvaceous co-ed who sits up front of every chemistry class and looks up wide-eyed at every lecture. It’s not clear if she likes him, respects him, or just feels bad for him, but there is something about this harmless social grotesque that makes her care for his plight. Attraction is another matter, however, so Kelp goes on a self-improvement kick at Vic Tanney’s gym (one of many glaring product placements in the film; Lewis was a pioneer in this aspect of production, a dubious achievement to be sure). When that fails to produce measurable results, he falls back on his specialty: better living through chemistry.

Where Stevenson’s good doctor is a humanitarian and moralist who unleashes the suppressed id within as an experiment and gets addicted to the rush, Kelp’s experiment is a bit more self-centered and pointedly directed. He concocts a formula specifically to transform him into his imagined ideal of what women want: the confident, popular, aggressive ladies’ man that the shy, stammering, socially awkward Julius can never be.