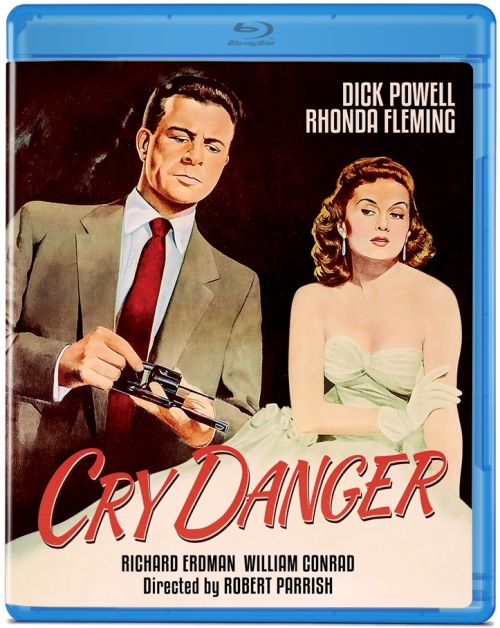 You can thank The Film Noir Foundation for the rediscovery of Cry Danger (Olive, Blu-ray, DVD), the independently-produced 1951 film noir developed by star Dick Powell as a follow-up to Pitfall (1948). Like a lot of films made outside of the studio system, it fell through the cracks and was only recently restored by UCLA and The Film Noir Foundation, who searched for the best materials available and created a new negative and 35mm prints for screening. That restoration is the basis of this disc debut.

Dick Powell is in fine sardonic form as Rocky, a guy released from prison after serving five years for a bank heist he didn’t commit, thanks to a witness who verifies his alibi, and goes in search of the real criminal to spring his buddy, who is still serving time. Richard Erdman is the witness Delong, a Navy vet just off his last tour of duty, and he hitches himself to Rocky to see if he’ll find the loot. Rhonda Fleming is the buddy’s wife, but before that she was Rocky’s girl. Her affections are rekindled but there is more rapport between the low-key, unflappable Powell and Erdman, whose injured vet is a drunk and makes no bones about it. Erdman is even funnier and drier than Powell and has an inspired courtship with a blonde pickpocket in the trailer park, a young cutie who keeps robbing him as if theft was a form of flirtation.

Robert Parrish made his directorial debut with this film and it is terrific: efficient, tight, well-paced and full of attitude and dry humor. He shoots most of it on location in Los Angeles and the key location, a dumpy little trailer park on a hill that looks down upon the city, gives the film a great sense of character and location: they can see the dream below them as they mark time in their cramped trailers. There’s a dark heart under the snappy surface like the best low-budget noirs. William Conrad co-stars as the signature heavy, a gang leader by the name of Louis Castro that Rocky believes is the real mastermind behind the heist, and Regis Toomey is the tough cop with a wary respect for Rocky.

Olive doesn’t go in for supplements—they offer well-mastered discs at low prices—but this is one disc I’d love to see get the special edition treatment. Co-star Richard Erdman is still alive and well and sharp as a tack (he’s the world’s oldest college student in the TV sitcom Community) and Film Noir Foundation founder Eddie Muller has provided a lot of commentary tracks and interviews for other film noir releases on disc. A little background on the film and its production would have been very nice, but when it comes down to it, it is all about the film and the quality of presentation and this is top notch given the rescue job performed by UCLA. 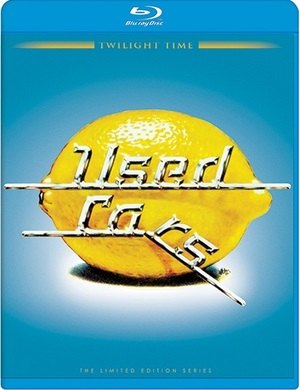 Used Cars (Twilight Time, Blu-ray) – Robert Zemeckis made some of the most famous blasts of American pop culture cinema—Back to the Future and Forrest Gump among them—but none has his films root about the cynical underside of the American dream with the gleeful anarchic pleasure of this satirical cult classic from 1980. Kurt Russell is the epitome of the smiling mercenary selling lemons to suckers with dirty tricks and phony promises, aided ably by his superstitious buddy Gerrit Graham. The outrageous stunts (such as illegally jamming the Superbowl with a guerrilla commercial and hiring strippers to bump and grind on the cars like a Vegas sideshow) are more than simply high concept gags: Zemeckis and Bob Gale squeeze the limits of bad taste out of these lemons for a deliciously tart cinematic lemonade. The R rating is for foul mouthed tirades and nudity that would be at home in a risqué burlesque farce. Jack Warden has a field day playing twin brothers and Frank McRae is hilarious as the giant adrenaline-pumped mechanic. The crotch-grabbing Mexican junk car wholesaler is none other than Alfonso Arau, the ubiquitous character actor and director of Like Water for Chocolate.

The Blu-ray debut includes the commentary recorded for the earlier DVD release and the talk from director Zemeckis, co-writer and producer Bob Gale, and star Kurt Russell is almost as much fun as the film itself. “We wanted Jimmy Stewart in It’s a Wonderful Life, except he’s totally corrupt,” is how Zemeckis explains the genesis of the story. Kurt Russell laughs back: “So you cast me!” These guys are having a blast laughing their way through their remembrances, but they manage to stay on track and keep the production stories coming. Also features four minutes of outtakes and along with Twilight Time’s trademark isolated musical score is a bonus score track with the unused score. Also includes an eight-page booklet with an essay by Julie Kirgo. Limited to 3000 copies, available exclusively from Screen Archives and TCM.

More classic releases on Blu-ray and DVD at Cinephiled 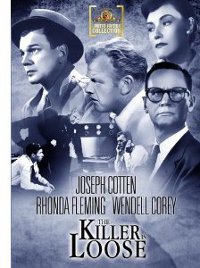 Despite the efforts of such fans as Clint Eastwood, who produced two documentaries on the director, and Martin Scorsese, Budd Boetticher is still a name known mainly to film historians and fans of classic westerns. Boetticher made some of the greatest, purest, most austere westerns of all time: Seven Men From Now (available from Paramount), The Tall T, Comanche Station, and Ride Lonesome (the latter three in a box set from Sony and Scorsese’s The Film Foundation). But like any successful director of the era, Boetticher made a lot more than just westerns. Yes, he did direct three bullfighting dramas (talk about a specialized niche), but he made war pictures, adventures, youth dramas, mysteries and crime pictures. Two of his best crime films arrived almost simultaneously via MOD earlier this.

Between his big studio breakthrough at Universal (where he made nine pictures in two years, most of them westerns) and his first of seven pictures with Randolph Scott, Boetticher directed The Killer Is Loose (MGM Limited), a 1956 crime drama starring Joseph Cotten as a police detective whose wife (Rhonda Fleming) is targeted by an escaped criminal looking for payback. Wendell Corey is superb as the soft-spoken bank teller turned robber who becomes twisted by revenge and pretty much slips over the edge of sanity. Boetticher’s biggest strength is efficiency and restraint, creating a camaraderie in the police squad room and a sense history between Cotten and his partner (Michael Pate), and he’s at his best building tension through dialogue and stillness that builds to a sudden burst of action. When Corey takes his former sergeant (John Larch) hostage, he never looses that quiet, deliberate composure, calmly reasoning his way to murder and executing his sacrifice without hesitation. Boetticher punctuates the gunshot with one of the great images of explosive violence: a shattered milk bottle. The sudden explosion shatters the tension of the deliberately measured scene and the burst of white milk against Larch’s black suit gives the sound a striking visual dimension.

The Rise and Fall of Legs Diamond (Warner Archive), Boetticher’s last film before he headed to Mexico for an eight-year odyssey, came out in the mini-boom of low-budget prohibition-era gangster films with second-tier stars of the mid-fifties to early-sixties, like Pretty Boy Floyd and Machine Gun Kelly and Al Capone with Rod Steiger. Ray Danton stars in the 1960 production as the real life dancer turned urban thug and mob killer Jack “Legs” Diamond, who made his name terrorizing other criminals in New York City, essentially running a protection racket aimed at the disorganized crime in a city yet to get mobbed up. What Boetticher brings is a smoothness, charm and brazen arrogance to anti-hero, building a film around a brazen villain with nary a hero in sight. As presented in the film, he’s not so much fearless as a rabid dog of an opportunist, driven by pure cussedness and arrogance and protected only by the belief that “The bullet hasn’t been made that can kill me,” a mantra he comes to believe after surviving so many shoot-outs. You know that’s going to last in a gangster film with the phrase “rise and fall” in the title. Karen Steele is somewhat blank as Alice, his dancing partner turned oblivious lover who spends the film with a wide-eyed expression of gullibility and surprise and, once she tips to the truth, drowns her misery and guilt in bootleg liquor. Elaine Stewart is far more convincing and interesting in a smaller role as a sultry but soiled showgirl discarded by Legs. And then there’s Danton in perhaps the best role of his career. He oozes cheapness and insincerity even at his most charming but becomes pure rage and drive when he pulls out his guns and starts blasting his competitors, wading in with no hesitation like he’s got nothing to lose. That’s part of the obligatory irony of his fall: it’s only when he starts losing it that he loses his cool and his fearlessness. Released in a fine-looking “Remastered Edition” in an anamorphic master (the case claims it is 1.85:1 but it’s actually 1.77:1, a minor difference but one worth noting for purists).

The Halliday Brand (MGM Limited) is neither a crime picture nor a Budd Boetticher film but I shoehorn the inclusion of this 1957 western because of star Joseph Cotten, who plays the eldest son of frontier lawman Ward Bond, and the late fifties low-budget sensibility. Both Cotten and Bond are too old for their roles, at least for the flashback story that shows how Bond’s racist streak and brutality turn his son into an outlaw guerilla. It begins with the old man on his death bed trying to make peace with his past, but it turns out prejudice and retribution are thicker than blood. It was one of the final features by B-movie veteran Joseph H. Lewis, who made a couple of film noir classics (Gun Crazy and The Big Combo) but never made the leap to big studio assignments. Always one to find creative solutions to budgetary challenges, he effectively creates a lynch mob scene out of off-screen crowd sounds, shadows across set walls, feet clumping up a staircase, and even more evocatively tells the story of the aftermath with a simple, suggestive image loaded with emotional pain. But his heart doesn’t seem to be in the rest of the film. He dutifully plays out the hand this production deals him and cashes out with a draw.

Available by order only from the MGM Limited Collection, from Amazon, Screen Archives Entertainment, Classic Movies Now and other web retailers:
The Killer Is Loose (MGM Limited)
The Halliday Brand (MGM Limited)