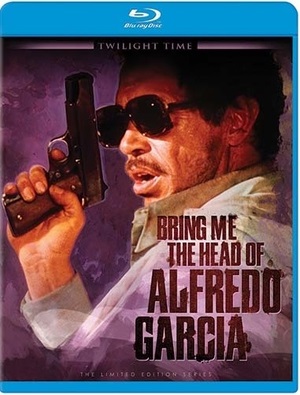 Bring Me the Head of Alfredo Garcia (Twilight Time, Blu-Ray), one of Sam Peckinpah’s personal favorites of his films (and the rare Peckinpah film not to get reworked by the studio), opens on an idyllic river scene with a pregnant girl soaking her feet in the lazy current with a beatific smile on her face. In his great westerns, the river scenes are the brief escapes from violent lives in his character, reprieves in the middle of the drama before they march back out to meet their fates. This comes before the story even begins and once the spell is broken by the violence of a brutal father, a Mexican crime lord played by Peckinpah regular Emilio Fernández, and a $1 million bounty placed on the head of Alfredo Garcia, the father of the unborn child, there is little peace or paradise to be found.

Warren Oates stars as Benny, a grubby lounge pianist playing for tourists in a Mexican dive when a couple of American hitmen (Robert Webber and Gig Young) saunter in looking for information on “an old friend.” Benny thinks he’s hit the jackpot—a whopping $10,00 for giving them proof that Alfredo Garcia is dead (yes, they want his head)—but it costs him everything that matters and the tawdry treasure hunt turns into a revenge drama.

It plays like a pulp noir thriller by way of a road movie of the damned, marinated in mescal and left to rot in the desert sun. Benny’s not that smart or savvy but Peckinpah clearly loves this small-timer with his wrinkled white linen suit and clip-on tie and bad cantina sing-along songs. He may be a loser but he truly loves his philandering girl Elita (Isela Vega) and he develops more backbone with every stage of the odyssey. When he’s double crossed, he literally drags himself out of a shallow grave and returns with vengeance on his mind, fueled by rage, tequila, and a perverse loyalty to the rotting head he’s come to talk to like a father confessor. The film opened to scathing, outraged reviews (one notable exception was Roger Ebert, who called it “some kind of bizarre masterpiece”) but has since been embraced as a perverse masterpiece, the ultimate cult film in the career of a defiantly confrontational director.

Twilight Time gives the Blu-ray debut of this film more original supplements than any previous release from the label. The 55-minute documentary Passion & Poetry: Sam’s Favorite Film is a new production from German filmmaker and Peckinpah fan Mike Siegel featuring a wealth of interviews with Peckinpah actors and collaborators. A new commentary track by Peckinpah historian and Twilight Time co-founder Nick Redman with Alfred Garcia co-writer and executive producer Gordon T. Dawson is paired with a track by Peckinpah scholars Paul Seydor, Garner Simmons, David Weddle and Redman previously recorded for the film’s DVD debut. There’s a new 25-minute video interview with Peckinpah biographer Garner Simmons, who was on the set of Alfredo Garcia, and a gallery of stills and promotional art, plus Twilight Time’s trademark isolated musical score and an eight-page booklet with an essay by Julie Kirgo. Limited to 3000 copies, available exclusively from Screen Archives and TCM.

Nowadays, most movies look factory-made, mechanically repeating cast, storyline, or F/X from the last big blockbuster. They touch us skin-deep, ask nothing of us but box-office, kill time and vanish. In contrast, Bring Me the Head of Alfredo Garcia is like getting accosted by a wild-eyed Ancient Mariner, a colorful dreg who draws you willy-nilly into his tragi-comic tale about an albatross, love, and death. The grizzled fellow’s story literally rubs your nose in the stink and sweat of Mexico, Sam Peckinpah’s earthiest haven from the Dream Factory. Playing Head‘s anti-hero Benny is anti-star Warren Oates, five-foot-three sleazebag, he of sheepish gaze and shit-eating grin. Suffering through an ever more hallucinatory journey, this latter-day Bogey pursues Peckinpavian Treasure of the Sierra Madre: a rotting head. Not politely stowed off screen, not tricked out in horror-movie makeup, but an inescapably flesh-and-blood thing that oozes, draws moscas, thunks off a car seat — and grossest insult, this revolting memento mori is flung right into our collective face!

Peckinpah means for his Head, his movie, to be hard to take. Every frame, cut, dissolve, line of dialogue, performance is chosen, sewn together to weave a seamless, searing pattern, its style inextricable from its substance. This black-humored parable exposes cruel conception and labor, the ugly agony of an outlaw artist’s desperation to make movies in spite of heartless moneymen in Muzak’d executive suites — and his own self-crucifying sins. Pulling critics and consumers down into the bloody muck of his artworld getting born, Peckinpah revels in images of himself as whore, martyr, vengeful creator.

END_OF_DOCUMENT_TOKEN_TO_BE_REPLACED

Where is Sam Peckinpah these days? Surrounded by family in Sausalito, or perhaps Mexico? Chumming it with the Montana Bloomsbury Group? Holed up in the cabin he built four or five miles from Warren Oates’ place, putting the final polish on the final draft of the screenplay that may become The Texan with Lee Marvin? All of the above are good bets, but I hope something like the last one is true, at least part of the time. There hasn’t been a new Sam Peckinpah movie in going-on-three-years, and that’s far too long to suit me.

There are, to be sure, people it would suit right down to the ground if Peckinpah never made another film. Some of them are critics and columnists who have written him off as an irrelevance, a failed prodigy whose intransigent individuality ultimately proved unproductive (“out of step, out of place, and desperately out of time”). Some are feminists, Marxists, people who get so mad about movie violence that they want to break something, others who have taken aesthetic, political, or philosophical objection to Peckinpah’s work. And some, unfortunately, are people who have the power to decide who is or is not bankableâ€”the kind of people whose company Peckinpah has had to avoid since acquiring a pacemaker a year or so back.

For all of these, and for an undeterminable but probably hefty portion of the potential movie audience, Sam Peckinpah and his films have less meaningfully operative reality than “Sam Peckinpah,” a pop socioaesthetic entity that can be bandied about as casually and as destructively as, say, “Walt Disney” or “John Wayne.” “Sam Peckinpah” is cinematic bloodbaths, brute machismo, violence and destruction lovingly prolonged by slow motion, women as sex objects (preferably for raping and punching out), and, for brevity and all-purpose inclusiveness, fascism. These form a template that can be applied to any forthcoming Peckinpah movie (by Peckinpah-baiters and, sadly, by some Peckinpah admirers, who figure bloodbaths, machismo, violence, rape, etc. are perfectly groovy): what comes through is only what’s allowed to come through. Even worse, “Sam Peckinpah” makes the actual experience of Sam Peckinpah movies superfluous. More than a few times, I’ve challenged users of the label only to learn that they’d never seen many, or any, of the filmsâ€”just heard about “Sam Peckinpah” and bought the concept for conversational convenience. It sees them through most of the best parties.

END_OF_DOCUMENT_TOKEN_TO_BE_REPLACED

There is the grand truth …. He says No! in thunder; but the Devil himself cannot make him say yes. For all men who say yes, lie; and all men who say no,â€”why, they … cross the frontiers into Eternity with nothing but a carpetbag, â€”that is to say, the Ego.
–Herman Melville, in a letter to and about Nathaniel Hawthorne

“It’s not so much dyin’ you hate,” confides gravel-voiced Cable Hogue, sinking fast. “It’s not knowing what they’re goin’ to say about you when you’re gone.” Sam Peckinpah’s 14-film gallery is crowded with broken mirrors of himself; Cable Hogue was his wholest and holiest reflection. Betrayed, left for dead by his colleagues in outlawry, Peckinpah’s desert rat “finds water where it wasn’t” and shapes a corner of wasteland into a ramshackle, low-down Eden. Just another Peckinpavian parable about making waterâ€”movies, that is–in the City of raptor Angels. Hogue was the complexly comedic upside of the American hunger artist Sam Peckinpah took himself to be–and projected, cruelly, in film after film.

So it’s only right that the dying Hogue, Sam’s surrogate, should prompt and prod his last critic, preacher and fellow-snake-in-the-grass Joshua Duncan Sloane, into composing a devoutly ironic funeral oration: “Don’t make me out to be a saint, but don’t put me down too deep.” The process of deathbed creation is cut; overvoiced into graveside performance, dissolving the time and space that separated Cable alive, Cable dead and buried, and Cable “gone into the whole torrent of years with the souls that pass and never stop.” Time may kill men; Peckinpah’s montage aims to kill time. His camera roams around Hogue’s kingdom, eulogizing, in the gathering dusk, the signatures and stations of his life, the mise en scene of The Ballad of Cable Hogue. Easy to see Sam in the skinny coyote that laps water in this unlikely oasis.

Sam Peckinpah died on December 28, 1984. That evening, Entertainment Tonight buried him in a Mary Hart-slot of throwaway news: Dead at 59. Director of The Wild Bunch. Known for extremely realistic violence. Hart’s empty-headed epitaph distilled the kind of shallow reading that plagued Peckinpah’s work while he was alive. Most reviewers trivialized his art. Brandishing critical-moral cudgels, they beat film form and style down to barebones plot recital. Concerned, educated liberals would sooner have given up jogging forever than witness one of his orgies of “realistic violence.” (Only the aesthetically illiterate would describe Peckinpah’s dances of death as realistic.) Often, they’d never seen the devil’s work for themselves; knee-jerk-wise, his name alone was sufficient deterrent. Now, even notoriety can’t hold him. Like Alfredo Garcia’s head, the man’s a cinematic relic.