The Phantom of the Paradise is funny and entertaining. It’s best as a comedy grounded in rock culture and it’s somewhat less successful as a humorous horror film. Perhaps because rock music has a power that exceeds that of a routinely developed horror plot, there’s a skittish lack of conviction to its terror side—even with an enjoyably gory ending. But its sendups of various rock&roll fashions are often good and it does rather nicely with its sense of the gangsterish side of the business.

END_OF_DOCUMENT_TOKEN_TO_BE_REPLACED 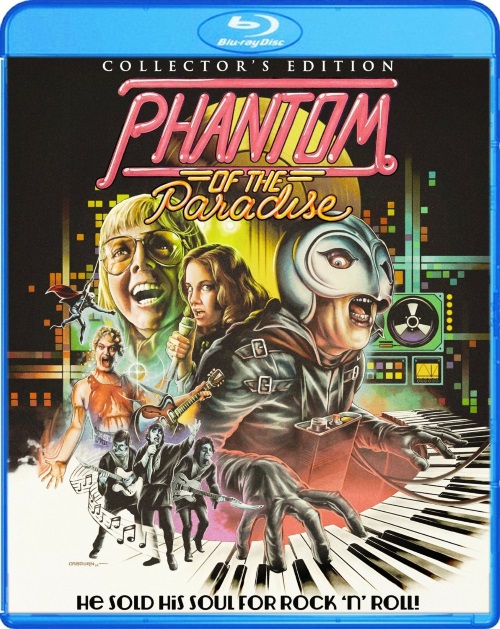 Phantom of the Paradise: Collector’s Edition (Shout Factory, Blu-ray) – Brian De Palma’s wild rock and roll remake of Phantom of the Opera by way of Faust, The Picture of Dorian Grey, and The Count of Monte Cristo plays like a decadent glam inversion of Jesus Christ Superstar. Paul Williams (who also wrote the dynamic, Oscar-nominated score and songs) stars as Swan, the evil record tycoon (in the opening scene he parodies Marlon Brando from The Godfather) who steals a rock and roll cantata from a sad sack singer / songwriter (William Finley), who transforms into vengeance-filled, hideously scarred monster in love with ingénue Jessica Harper. This outrageous, over-the-top fantasy, done up in real De Palma style (his love of split screen technique finds a new outlet in the video monitors of Swan’s voyeuristic headquarters), is a spirited satire with wild rock and roll numbers and his most sensitive love story.

Shout Factory’s transfer is from a new HD master and released under their Scream Factory imprint, and they do something novel with the Blu-ray+DVD Combo edition. There are so many supplements in this edition, most of them created for this edition by Shout and all of them new to American home video, that they are split between the two discs.

So you get the two exclusive commentary tracks – one with stars Jessica Harper, Gerrit Graham, and Archie Hahn, Jeffrey Comanor and Peter Elbling (aka the Juicy Fruits), the other with production designer Jack Fisk – on the Blu-ray along with generous new interviews with director Brian DePalma and star / composer Paul Williams and a short piece with make-up artist Tom Burman (focusing on the distinctive mask), plus 26 minutes of alternate takes (presented in split screen to compare to the footage used in the film) and seven minutes of outtakes (showing changes made to cover a post-production change in the name of the record company).

The DVD features the balance of the supplements. The 50-minute documentary “Paradise Regained,” which features interviews with De Palma, producer Edward R. Pressman, and stars Williams, Harper, Graham, and the last William Finley, and the 72-minute interview with Paul Williams conducted by Guillermo Del Toro were both featured on the British Blu-ray released by Arrow earlier this year and licensed for this disc, along with an archival interview with costume designer Rosanna Norton and a little 30-second clip with William Finley and the Phantom action figure. Also new to this release are interviews with producer Edward R. Pressman and drummer Gary Mallaber, a guide through the poster design by the artist’s widow, and Gerrit Graham reading a bio he wrote for the film’s press kit.