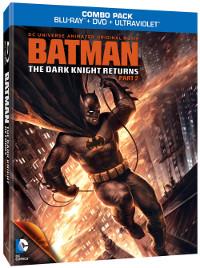 Like the first half (released in 2012), this adaptation (directed by TV animation veteran Jay Oliva) manages to capture the best and the worst of Frank Miller: along with the savage deconstruction of superhero fantasy is a glib satire of social liberalism as blind hysteria and criminal enabling that makes Ayn Rand look measured. Miller’s heroes, however, are not captains of industry but vigilantes and old soldiers beholden only to justice in a world where the figures of authority are more interested in self-image than public good. Which makes Batman the great libertarian hero: the maverick loner more interested in protecting individuals than institutions and making sure the most savage criminals are duly punished (there is a real streak of Old Testament retribution in Miller’s take). The Miller philosophy is pared down to the bone in the inevitable showdown between Superman (voiced by Mark Valley), the patriotic good soldier dedicated to protecting the country and following the orders of his commander in chief, and Batman, beholden to nothing but his conscience.

While any direct-to-disc animated adaptation is doomed to fall short of Miller’s sensibility, this is as good as we could hope for. Oliva takes some shots right out of Miller’s graphic novel, and though the clean line-drawing animation can’t match the heavy wood-cut slashes that look carved in to the graphic novel, the big, blocky, heavy character designs of Bats and Supes are preserved, as is the gruesomeness of the smiling dead left behind by the Joker. And not only does this have a body count appropriate to the savagery of the world gone wild violence, but it is shockingly cold-blooded. Oliva creates an eerie atmosphere for the last act showdown, which occurs under the gentle fall of nuclear fallout looking like ashy snow, and makes blindly-aggressive Cold Warrior Ronald Reagan look even more like the walking dead than Miller did in the original graphic novel.

Blu-ray and DVD, with the featurettes “Superman vs. Batman: When Heroes Collide” and “The Joker: Laughing in the Face of Death,” the dense 45-minute “From Sketch to Screen: Exploring the Adaptation Process with Jay Oliva,” two bonus episodes from “Batman: The Animated Series” and one from “The Brave and the Bold,” and a sneak peak at the upcoming “Superman Unbound.” The Blu-ray also includes a digital comic excerpt from Miller’s original graphic novel, a bonus DVD, and an UltraViolet digital copy for download and instant streaming.

The 1932 White Zombie (Kino), from the Halperin brothers (producer Edward and director Victor), effectively and evocatively recreates the misty gothic mood of the Universal horrors of the day on a B-movie . The divinely satanic-looking Bela Lugosi sinks his teeth into his best role since Dracula, a languorous hypnotist and voodoo master who dominates the film with his assured bearing and cruel control. Not just menacing, he is ferociously vindictive, supplying the local mills with an army of zombie laborers and turning his enemies into his personal zombie servants. The film drips with atmosphere from the opening credits, accompanied by eerie chanting, and the arrival of our romantic couple (Madge Bellamy and Robert Frazer) in Haiti in the dead to night, where they witness a mysterious midnight burial and coming face to face with Murder Legendre (Lugosi with goatee and searing eyes), who becomes obsessed with the young woman. The supporting roles are stiff and mostly overacted, but Lugosi is mesmerizing and the oppressive atmosphere of fear and almost perpetual night inhabited by the lumbering, hollow-eyed walking dead is remarkably effective. In one scene, as Frazier drowns his sorrows in drink at a Haiti nightclub, the money-saving suggestion of crowds through off-screen sound and shadows cast on the wall becomes a nightmarish scene of a man haunted by the disembodied ghosts of the island. Moments like this make me think of the film as the poverty row answer to Dreyer’s Vampyr, one of the overlooked classics of early American horror and the first true zombie film.

This bargain bin regular is remastered from a fine grain print and presented on Blu-ray and DVD in both digitally remastered and “raw” versions, the former clean and scrubbed of texture, the latter scratch and grainy and full of detail. Also features commentary by film historian Frank Thompson, a six-minute interview with Bela Lugosi from 1932, a gallery of stills, and the trailer from the 1951 re-issue.

More releases at Videodrone on MSN