While the world was awed by the wave of neo-realism breaking out of Italian borders in the decade after World War II, local audiences were flocking to the overheated melodramas directed by Raffaello Matarazzo and starring dashing matinee idol Amedeo Nazzari and Greek-born beauty Yvonne Sanson. These eternally star-crossed lovers are forever separated by scheming villains, moral hypocrites, lies, misunderstandings, wrongful imprisonment, emotionally devastating tragedies and wicked plot twists designed to pour on the suffering. Though often set in the world of working class existence (or at least the collision the wealthy with the proletariat), there is nothing naturalistic about the sensationalism of these stories. 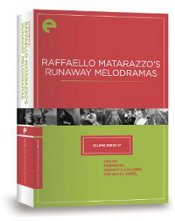 Matarazzo’s melodramas are set in a culture of class barriers and controlling families, where letters are purloined, innocents misled, and blackmail and extortion wielded by the most dastardly of villains who, out of greed, twisted piety or simple malevolence, drive lovers apart and put them through sheer hell. The pure at heart heroines played by Yvonne Sanson invariably become unwed mothers without losing their holy symbolic virginity and martyr themselves for love, their children or simply out of despair. And yet this working class saint, even when decked out in the formality of a nun’s habit (designed as elegantly as any gown), manages a simple glamour and radiance. Nazzari, meanwhile, whether an earthy working class mechanic or a crisply elegant aristocrat, is the handsome matinee idol with a trim mustache whose innate compassion and warmth heats up to the boiling under the conditions of these films.

These are not the exaggerated social commentaries of Douglas Sirk or the elegantly mounted, emotionally precise dramas of Vincent Minnelli. These are hot-blooded twists on Victorian melodrama in a Catholic culture, where the suffering and sacrifice borders on martyrdom and the church offers both salvation and a kind of prison. And there is a kind of shorthand that dispenses with much of the motivation (malevolence and vindictive behavior is simply accepted as a given for many characters) and even jumps over plot points, expecting the audience to understand implicitly, such as when the Countess of Nobody’s Children arranges a marriage for her son without his consent. In the very next scene, he walks in the door of his home a husband and father. Apparently maternal authority was beyond question for these audiences, regardless of motivation.