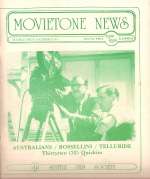 There are undeniable similarities between Butch and Sundance: The Early Days and Richard Lester’s reworking of popular mythology, Robin and Marian. The earlier film, written by William (Butch Cassidy and the Sundance Kid) Goldman’s brother James, contained several seemingly deliberate takeoffs on Butch and Sundance in the dialogue, misadventures, characterization and relationship of Robin and Little John. In Butch and Sundance: The Early Days we encounter the same kind of buddy-comedy once again, with the two young men (Tom Berenger, William Katt) consistently rejecting heterosexual love in favor of their own interdependence. The departure from Butch Cassidy’s two little sons is much harder for Butch than the farewell to his wife (Jill Eikenberry); and there is a scene in which Butch and Sundance—not Butch and Mary—are treated as the boys’ parents. Butch and Sundance: The Early Days also shares with Robin and Marian an emphasis (generally uncharacteristic of Lester) on landscape to delineate character. Lester and Laszló Kovacs create the film’s best moments out of such memorable phenomena as the sand-palace mesas among which Butch first proposes partnership to the Kid (then walks from one edge of a mesa to the other, and asks, silhouetted in longshot, “How do I get outta here?”); the snowdrifts among which the Butch-Sundance relationship becomes cemented in a tradeoff of heroic sacrifices, and behind which they gradually disappear in a visual denial of the heroic stature they sought to achieve by bringing diphtheria serum into an infected area; or the floodwaters that make a creek out of the main street of Butch’s hometown, where Sundance faces the trauma of killing his first human being.