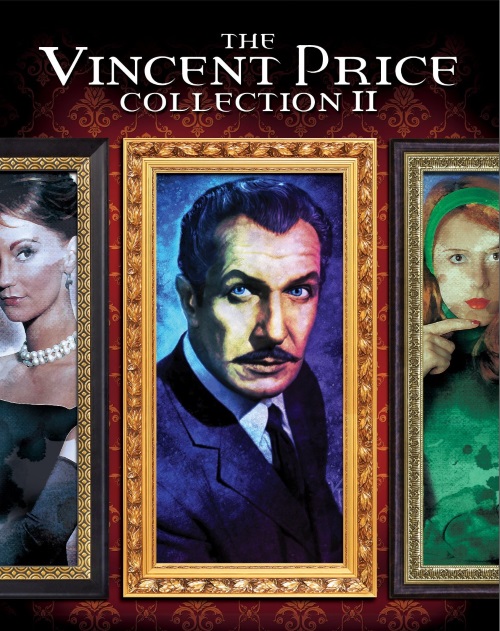 The Vincent Price Collection II (Scream Factory, Blu-ray) follows up last year’s collection with the debut of seven more Vincent Price horror films in a special edition set. Shout Factory (under its Scream Factory imprint) draws from its licensing relationships with 20th Century Fox and MGM to complete the run of Roger Corman Poe films begun last year and fills to the rest a couple of sequels and two titles too often relegated to public domain bargain discs.

The Tomb of Ligeia (1964), the final film in Corman’s cycle of Edgar Allen Poe adaptations, is considered by many the best (partisans tend to split over this and The Masque of Red Death, 1963), and it is certainly the most sophisticated, with rich performances by Price, who is both haunted protagonist and Gothic romantic leading man (a first in the series) as widower Verden Fell, and British actress Elizabeth Shepherd, who brings a zest for life to the role of Rowena Trevanion, whose fascination with Verdan’s self-imposed exile turns to romance. Once she draws him out of the haunted manor and into the world for their honeymoon, that shadow of gloom is lifted and he can even discard the shaded glasses he wears in the bright light (“I live at night,” he explains early on), but once back in the abbey, the ghost of Lady Ligeia reasserts her control. Or so it seems after Verden offers a demonstration of hypnosis and Ligeia takes over Rowena for a chilling instant while she’s under the spell.

The Tomb of Ligeia is the only one of Corman’s Poe films to shoot location exteriors (Corman used studio sets entirely for previous films to create a rarified unreality, he says, as befitting his interest in psychology and the unconscious in relation to horror), and the ruins he uses for Fell’s abbey home are astoundingly beautiful, the bleached bone remains of a fallen castle behind his stone manor, the dead of the past haunting the living of the present. Fittingly, it is also the most psychologically rooted of his Poe adaptations, though the revelations of the finale do not fully explain the black cat who seems to act as Ligeia’s familiar in the abbey, or Rowena’s brief possession by Ligeia. Robert Towne’s intelligent script and Corman’s moody direction melds the explicable and the supernatural very nicely in a tale that is never simply one or the other.

As with the previous set, these editions are from HD masters provided to Shout Factory by the rights holder, in this case MGM. It’s a good looking transfer though it is not a restoration. You can see surface scratches and grit and in one spot a light vertical scratch running through the left side of the image, but it also has vivid color, good clarity, and a strong image, which is still the most important thing in a disc release.

Features commentary by Roger Corman carried over from the earlier DVD release plus new commentary recorded for this release by actress Elizabeth Shepherd, and an archival video introduction and afterward by Vincent Price, originally taped for a public TV horror series decades ago, plus a gallery of stills and a trailer.