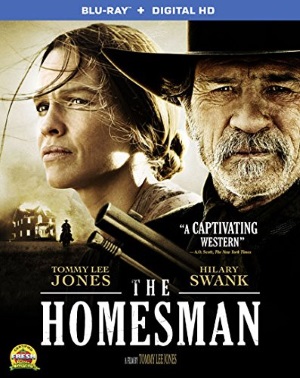 The Homesman (Lionsgate, Blu-ray, DVD), one of my favorite films of the year, was overlooked by critics in the rush to praise more conventional and less resonant films. It deserves a second look. Tommy Lee Jones directs, co-writes, and stars in the film as George Briggs, a drifter saved from a lynching by Mary Bee (Hilary Swank), a tough, capable settler who has tamed her harsh Nebraska homestead and now sets out on an odyssey. She trades his life for help in transporting three women (Grace Gummer, Miranda Otto, and Sonja Richter) driven mad by life on the frontier to a town hundreds of miles away, where they have been offered care and sanctuary. It’s a western, sure, but certainly not in any traditional way. Adapted from the novel by Glendon Swarthout (who also wrote, among others, “The Shootist”), this story presents the West as a hard place that creates hard people and destroys the rest.

Jones is marvelous as the no-account whose word is secured through his greed but also rises to the occasion when necessary, but Hilary Swank dominates the film as Mary. She has carved out a successful spread but remains single and terribly lonely; she’s “too bossy,” says one of the few bachelors available on this vast sea of grass, scrub, and rolling hills. Her performance as a tough, driven, commanding woman cuts through the film like a knife. She was robbed of an Oscar nomination.

The film offers a landscape to match the emotional isolation; this land is as empty and lonely and unforgiving as it is lovely. There have been a lot of films about the costs and hardships faced by the first American settlers of the West, but they’ve all focused on the physical—violence, weather, shelter, food, the hardships of carving a home out of the wilderness. The Homesman looks at the toll on the heart and the soul and the psyche in a homestead miles from the nearest neighbor. It is a powerful film of elemental emotions and instincts, filled with eccentric and unusual episodes that straddle the fine line between humor and tragedy.

Blu-ray and DVD with three behind-the-scenes featurettes. The Blu-ray also features a bonus UltraViolet digital copy of the film. Also available on cable and digital VOD (through iTunes, Amazon, Xbox and others).

Tommy Lee Jones, as actor and director, clearly cares a lot about the Western. Is there an audience that cares with him? The once-dominant genre has declined so steeply since the 1970s that each new one is an event, and Jones has become one of the few people still riding herd on the form. (Though ailing at the movies, the myth of the West is alive and well in American politics, currently full of gun-totin’, hog-castratin’ candidates.) The Homesman is so good it makes you wish Jones could somehow make a Western a year, just to keep exploring the pockets of American frontier experience that still need filling in. This one offers a series of new wrinkles, beginning with its route: The story goes from west to east, the opposite of most Westerns.

Frontier spinster Mary Bee Cuddy (Hilary Swank) has known the man for about 24 hours, and only now asks his name. Sociability’s got nothing to do with it; she needs his moniker for a financial transaction. He thinks for a moment, and squints at her: “Let’s say George.” “George what?” Another moment for thought. “Briggs.” After saying the word, he seems to consider it for another moment, and likes it fine. He says “George Briggs” a couple more times, laughing and pronouncing it with a singsong lilt, as though charmed by the jig-like cheerfulness of the words.

It’s a signature beat for Tommy Lee Jones, who plays Briggs and who also directed, produced, and co-scripted The Homesman. Briggs has reason to be amused; just before Miss Cuddy found him, he’d been blasted with dynamite (for claim-jumping another man’s homestead) and left to die on the back of a horse, the rope around his neck tied to a tree branch above him.