Joe Dante graduated from the Roger Corman School of Practical Filmmaking, honing his craft on drive-in movies like Hollywood Boulevard (1976) and Piranha (1978) before graduating to such pop-culture genre riffs as Gremlins (1984) and Small Soldiers (1998), not to mention Gremlins 2 (1990), one of the funniest movies of its generation. All of those films are largely defined by his love of movies and offbeat sense of humor, and he’s brought that sensibility to his latest feature, The Hole, a horror film for family audiences that he shot in 3D. With film’s release on Blu-ray and DVD this week (in standard 2D only), we got the chance to chat with Dante by phone to discuss The Hole, his college collage epic The Movie Orgy, which has been playing in special screenings around the country, and his love of movies.

Between my DVD collection and Turner Classic Movies, I sort of miss the whole… I grew up in an age where you turned on the TV and there was a movie on, and you never knew what it was or you didn’t catch the beginning of it or whatever, and you discovered movies that way. Now I have this huge DVD collection and I can see any movie I want anytime, and somehow it’s still not as exciting as just turning on the TV and seeing what’s one. So let’s see, the last DVD I ran was… Curse of the Demon, actually. I’m involved in a semi-remake of it, so there was a good reason to watch it. Movies that I really love, I find that I can’t watch too often because I get to know them so well that I get too… I’m the kind of guy who, if I haven’t watched a mystery in a long time, I won’t remember who did it and I get to re-experience the whole thing over again. So I don’t like to be too up, seeing things five times a year. I try to try to spread it out.

Do you still  get to the movie theaters?

I do. I’m one of the hold-outs of my generation. I actually go to the movies almost every weekend and I usually see at least two pictures. I miss the old double bills. When I was in college in Philadelphia I would go to double bills and triple bills all day long, and then at the end of the day I’d go home and watch movies on TV. (laughs) One day I saw 15 movies, in the space of one day. Which is pretty hard to do. 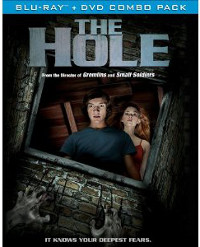 So why The Hole and why shoot it in 3D?

The Hole is a picture I made because I was offered a lot of horror movie and generally they were not very good and this one had good characters and didn’t go where I thought is was going to go when I read the script. I’d seen some other movies that were similar to this and I thought, I know what’s going to happen, and I was generally surprised that that’s not what it was about. I liked the characters, I like the argot, I liked the way they talked. And even though it was a very small movie with a cast of six and three locations, I said to the producers, “Why don’t you make this film in 3-D? I think you could use it to pull people in instead of throwing things at them. You could open into the story and open into the basement, essentially.” And they went for it. Did you see it in 3-D?

Sadly no. It has not played theatrically in Seattle at all and I watched it from a DVD.

They’re hoping that an Atlanta opening in four theaters at the end of the month may do well enough to be able to expand it. At least I hope so.