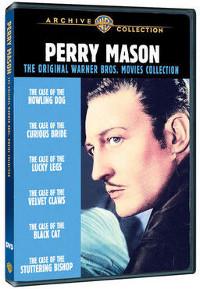 Raymond Burr may be the definitive screen incarnation of Perry Mason but decades before his small screen debut in the iconic TV series, Warren William played the legendary lawyer in a series of big screen movies in the thirties.

William was the silver-haired wolf of some of the great Warner Bros. pre-code movies, adept at playing corporate sharks with ruthless business instincts, suave manners, and an eye for younger women. In The Case of the Howling Dog (1934), his Mason is a lawyer right out of the pre-code sensibility: cavalier with professional ethics, obstructing justice to protect a client, flamboyant in the courtroom, where his style is filled with dramatic, showboating tactics. You’d never recognize the character if all you know is Burr’s measured, low-key, serious incarnation. This Mason is quite the dapper bigwig, the star attraction of a big legal firm in an art-deco skyscraper office, and it takes a challenge to get him to personally take a case. Or maybe the appearance of Mary Astor as the mysterious woman in black.

Alan Crosland directs his debut but things get livelier in his second appearance in The Case of the Curious Bride (1935), directed by the great Michael Curtiz, who kicks things off with a breakneck montage and introduces Mason as flamboyant character with high class style and epicurean tastes (he cooks his own meal in a high-end restaurant, with the blessing of the chef), and friendships throughout the city that pay off in his investigations (the “Welcome” mat at the morgue is a sardonic touch, but it’s true in Mason’s case; the coroner is a drinking buddy). Warner company player Allen Jenkins, who played a police detective in the first film, gets promoted (sort of) to play Mason’s investigator Spudsy (kind of a comic Warner wise-guy version of Paul Drake). If Mason played fast and loose with the law the first time out, he even more shamelessly skirts it this time around.

The Case of the Lucky Legs (1935), directed by Archie Mayo, the most screwball of the Mason movies, opening with Mason passed out drunk in his office and Della (played by Genevieve Tobin, the third actress to take the role in three films) lobbing wisecracks at him. The flirtations between Perry and Della are priceless here. The film rushes along with a snappy Warners pace and a non-stop barrage of banter and comic insults and William has even more fun that usual with his cheeky attitude and investigative antics. He’s unfazed by anything that crops up, rolling with the twists and turns and offering a wisecrack for every occasion, and this time he doesn’t even enter a courtroom. He explains it all while getting a physical in his office from his personal physician (fittingly enough, the coroner from “Curious Bride”).