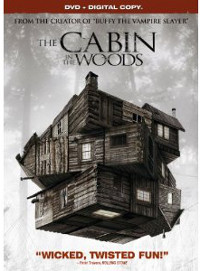 Drew Goddard goes way back with Joss Whedon. He got his start writing episodes of Buffy the Vampire Slayer and Angel, his launching pad to Alias and Lost and his first feature film screenplay, Cloverfield (produced by Lost creator J.J. Abrams). The Cabin in the Woods reunited Goddard with Whedon, who co-wrote and produced the film but handed the directing over to Goddard. That’s a vote of confidence for a first-time director and Goddard ran with it, delivering the most high-concept horror film of 2009. Unfortunately, the bankruptcy of MGM left the film in limbo until 2012, when Lionsgate picked up the film and finally brought it to theaters. In the intervening years, one of their young, unknown actors became a little more known, thanks to a couple of little comic book movies called Thor and The Avengers (the latter written and directed by Joss Whedon).

The Cabin in the Woods arrives on Blu-ray, DVD, and On Demand this week, and director Drew Goddard is doing the interview rounds again. In our too-brief phone call, we talked about horror movies, the tricky balance of horror and comedy, and why making The Cabin in the Woods was the most fun he’ll ever have on a movie set.

I haven’t seen the film yet, but I can’t stop watching the extended “Cloud Atlas” trailer. It is possibly my favorite movie of all time. I have watched it so many times, I cannot tell you how excited I am for that movie. I don’t know what it is about that five minute trailer but I am just weeping every time by the end of it. I am so excited for that movie. And it sounds like we’re in for a really good fall as movie lovers. I can’t remember the last time I’ve been this excited about movies.

I just finished listening to the commentary track to “The Cabin in the Woods,” with you and Joss Whedon, and right at the end, during the credits, you blurt out, “Oh my god, this is the most pretentious commentary track we ever did.” So of course I have to ask: what was the previous champion?

(laughs) I’m sure there’s so many. I try not to do these things for that exact reason. Let me think… I’m sure there are some gems on “Buffy: Season Seven” where I was really full of myself.

I love the way you guys just geek in the commentary out over the monster movie mash of the third act, where every horror icon you guys could create this side of copyright infringement appear like a roll call. You can tell that you guys love movie monsters and horror films.

I’m glad that comes across because it really is the answer to every question that people ask me about “Cabin.” I just love this movie. I just love this genre and what we could do with the genre and everything came from that place. Everything about this movie came from, We love horror movies, let’s just make one.

Continue reading at Videodrone on MSN