Director, writer, pulp fiction author, raconteur and all-around maverick character Samuel Fuller was as proud of his military service as any of his artistic accomplishments. Like hundreds of thousands of other Americans, he enlisted in the armed services after Pearl Harbor was bombed by the Japanese. He joined the infantry and, as a rifleman in the First United States Infantry Division (aka “the Big Red One”), he participated in the Allied assault on North Africa in 1942, fought his way through Sicily, landed in the first wave on Omaha Beach during the D-Day invasion of Normandy, took part in the liberation of France and Belgium, and marched into Germany, where his squad helped liberate the Falkenau Concentration Camp. “I began a journal in North Africa,” he shared in his autobiography, A Third Face. “If I survived, I was going to write about my war experiences.” His experiences informed The Steel Helmet and numerous other war films but it was forty years before he put his own story down, first in the novel The Big Red One, published in 1980, and then in the film that came out the same year, in a compromised form that was partially restored in 2004.

The Big Red One is Fuller’s most autobiographical film, at once an old-fashioned war thriller and a portrait of the insanity and senseless destruction of combat, and the most expensive and ambitious production of his career. It charts the journey of his own real life unit (1st Infantry, 1st Platoon) through the experiences of four riflemen. Robert Carradine, Mark Hamill, Bobby Di Cicco, and Kelly Ward play the “four horsemen,” as their tough, taciturn Sergeant (Lee Marvin) names them, the eternal figures in a rifle squad filled out by a couple of hundred replacements whose names they finally give up trying to learn over the four years of combat. The rest are simply “dead men with temporary use of their arms and legs,” explains one of the riflemen, and in Fuller’s clear-eyed portrait of combat, the only glory in war is survival. 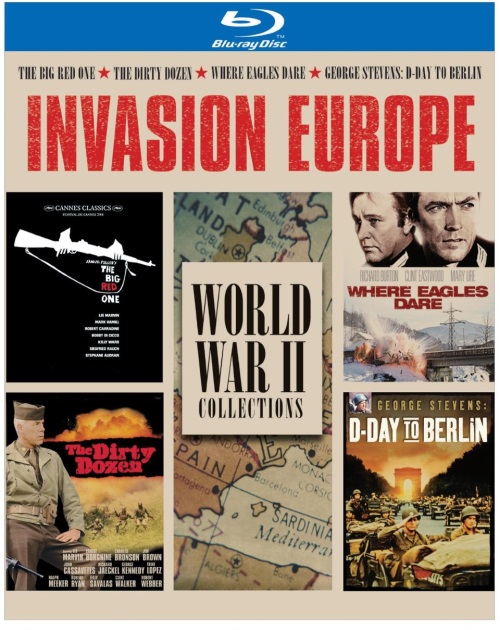 Memorial Day is traditionally the occasion for studios to roll out their war movies again. This year, Warner upgraded a couple of titles to Blu-ray and then dropped them into new collections of vaguely curated box sets. Thematically speaking, Invasion Europe and True Stories of WWII are a little arbitrary, each a collection of three features on Blu-ray and a bonus DVD of non-fiction extras, but at least one set is defined by rip-roaring World War favorites.

Invasion Europe is anchored by Sam Fuller’s The Big Red One (1980), which was also newly released individually on Blu-ray earlier in May. Fuller’s semi-autobiographical story of one American rifle squad’s tour of duty from North Africa through D-Day stars Robert Carradine (standing in for the cigar chomping, pulp-fiction writing Fuller), Mark Hamill, Bobby Di Cicco, and Kelly Ward as the green recruits who become hardened survivors under the gruff tutelage of Lee Marvin’s tough, taciturn Sergeant. We never learn his name – this World War I retread is simply Sarge and Sarge teaches these raw recruits that in war you don’t murder, you kill. The only glory in war is surviving, in Fuller’s clear-eyed portrait of combat, and this quartet of survivors become Sarge’s “Four Horsemen,” the eternal figures in a rifle squad filled out by a couple of hundred replacements whose names they finally give up trying to learn.

“This is a fictional life based on factual death,” begins the film. We land in North Africa for a trial under fire, scramble through the mountain villages of Italy, and charge Omaha Beach on D-Day, all on a fraction of the budget and a sliver of the cast that Steven Spielberg had at his disposal for “Saving Private Ryan.” 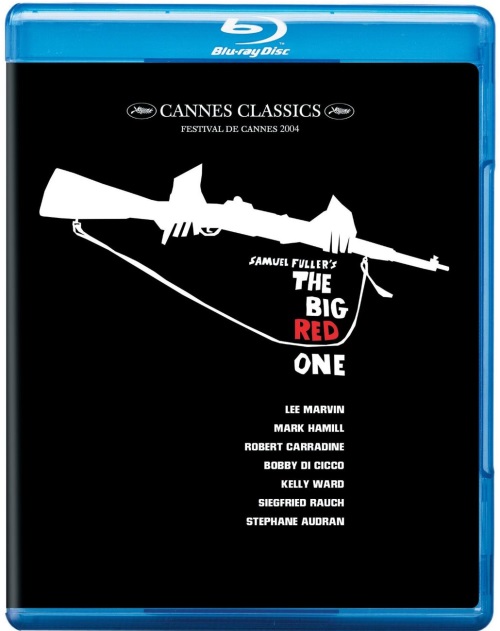 The Big Red One has the scope of an epic sculpted with a spare, suggestive visual style. Isolated, deserted locales dominate their odyssey. Death is abrupt and brutal, ready to strike at any moment. It verges on the unreal, and these boys learn to respond instinctively to the unreality of it all. A World War II vet himself, Marvin’s face is a road map of the war, the worn, battered, yet unusually calm and warm face of a survivor. His heart is hidden under a helmet and three day stubble, but the weary serenity behind his eyes can turn warm and protective when the children of liberated villages follow Sarge around like puppies and he wordlessly adopts them for a few heartbreaking moments.

The version that Fuller released in 1980 was not the version he intended. In 2004, film historian, critic, and documentary filmmaker Richard Schickel uncover hours of footage and, using Fuller’s original script as a guide, embarked on a reconstruction. The result is not quite the mythic 4 hour rough cut Fuller bragged about (which may not have ever existed), but it’s the closest we’re likely to get to Fuller’s intentions. It fills out Sam Fuller’s “compromised” 1980 war drama with over 45 minutes of new and expanded scenes that restore characters lost in the cutting, fill out experiences, and give the film a shape completely missing in the original cut. Both versions are included here, but the longer reconstructed version is not HD: it’s encoded at 480i, basically the same as a DVD.

Also features the supplements from the earlier DVD release, notably commentary by Schickel and a 48-minute documentary that features the surviving actors and provides a detailed look at the inspiration for the reconstruction, the process of searching for and restoring missing scenes, and the technical tools used in the reconstruction. Further discoveries not included in the reconstruction are included in a gallery of deleted scene, and comparisons of original and newly restored extended scenes are provided with commentary by reconstruction editor Bryan McKenzie and post-production supervisor Brian Hamblin. Archival materials include a Fuller-produced 30 minute promo reel and Richard Schickel’s 1973 documentary The Men Who Made the Movies: Samuel Fuller.

[originally published in Steadycam, February 13, 2005; an earlier version of this article was published late 2004 in Queen Anne & Magnolia News]

with WRITER on top like that—came to Seattle in May 1976 for a special appearance with two of his movies under the aegis of the Seattle Film Society. He came to enjoy himself, to meet some nice people, to eat some of that Northwest salmon a film-historian friend back in L.A. had urged him to order. And he would talk, not only between the two films in a UW auditorium but also during the five hours between landing at SeaTac Airport and showing up for the gig. And from 10-something the next morning till 11-something the next night, while relays of much younger listeners basked, then collapsed and disappeared as replacements showed up.

He also brought his work along with him, in the form of a stack of paper and a tall, klunky manual typewriter that looked as if it might have come out of one of the newsrooms where he had pounded out stories nearly half a century earlier as a tabloid reporter in New York. He was writing his novel The Big Red One, part of the process of getting to make a movie about what it was like to serve in the 1st Infantry Division, United States Army, from the beginning of America’s participation in World War II to the end—which is to say, from North Africa through Sicily, France, Belgium, again France, and finally to Germany and Czechoslovakia. He had been waiting for the chance to make that movie since sometime in the Sixties (but really, perhaps, since 1945). In 1976, it looked as if it was about to happen, since the critic turned filmmaker Peter Bogdanovich was throwing his own (short-lived) clout into lining up a production deal for Fuller. As it turned out, three more years would pass before he got the go.

END_OF_DOCUMENT_TOKEN_TO_BE_REPLACED

Trying to flag down a notion of just how “pure cinema”—Hitchcock’s term—works is tricky. The implication is that there is a level on which film operates which is undetectable by those who are unwilling or untrained. Sounds kinda elitist, I’m sure, but this is probably why many people miss the glories of Halloween and The American Friend to settle for the satisfying conventionality of Brubaker‘s good intentions. All that’s really necessary for appreciating “pure cinema” is a pair of open eyes: when a filmmaker is fluent enough with the language of the cinema, then the bodies, images, sounds will accumulate, interweave, and a lasting impression will be registered through those open, willing eyes. To watch Robert Bresson’s Lancelot du Lac or Alfred Hitchcock’s Torn Curtain is to feel utterly in the hands of a master: every color, aperture, strand of dialogue, camera movement can be apprehended to be part of the bigger fabric of the movie, each cinematic event reflecting on another. Bresson’s Pickpocket is an example of pure cinema which employs a series of dispassionate images that, piled on top of each other as they have been by the end of the film, produce a startlingly moving fadeout.