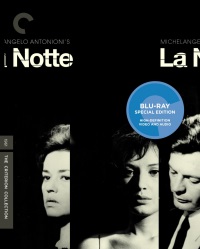 La Notte (Criterion, Blu-ray, DVD), the second film in Michelangelo Antonioni’s “trilogy of alienation” (it’s bracketed by L’avventura, 1961, and L’eclisse, 1962, both on Criterion DVD), stars Marcello Mastroianni as a celebrated novelist in Milan who has nothing left to say and Jeanne Moreau as his quietly unsettled wife who can’t seem to express all the disappointment building up behind her unfazed expression. Their marriage is inert at best but they seem resigned to their roles, at least until a hospital visit to a friend dying of cancer (he has champagne delivered by the nurse for the visit – but of course) shakes up Moreau.

The film covers just under 24 hours of their life together, not that they ever seem “together” even when they go out to a nightclub and, finally, an all-night party at the mansion of an industrialist who wants to hire Mastroianni to write his biography and run the public relations of his company. It all plays out in sculpted landscapes and creamy, austere modern spaces filled with reflective surfaces, but these rarified oases of affluence are no less alienating than the crush of traffic in downtown Milan. Mastroianni is so at home in the crowds that he just flows with the current like driftwood in a slow stream while Moreau, shaken by the visit to their terminal friend, wanders away from the crowds, braving the current in the streets or simply watching the rituals from afar. Just like Antonioni, who dispassionately records every nuance of the rituals and flirtations and seductions and watches Mastroianni’s fascination with an enigmatic beauty played by Monica Vitti, a jaded-before-her-time young brunette who see-saws between childish playfulness and world-weary commentary.

This was one of the films that inspired Pauline Kael’s “Come-Dressed-as-the-Sick-Soul-of-Europe Parties” essay, a portrait heavy on the Antoni-ennui of beautiful people narcotizing themselves on small talk and cocktails and sex. Antonioni strips Mastroianni of the winking charm he brings to even his most rakish characters and turns him into an empty shell (“I know longer have ideas, only memories,” he tosses off with a self-effacing half-grin) with a self-awareness that suggests a desperation to lose himself in meaningless activity. Moreau is more haunting and less passive, her eyes and signature frown carrying a disappointment she shrugs away with a flash of a smile. It’s a portrait of lives disconnected from feeling or passion and a marriage that has slipped into mere routine, and you may find it mesmerizing and sophisticated, or merely elegantly-sculpted tedium amidst the idle rich and empty intelligentsia. I’m not an Antonioni fan – give me the strangled yearnings and corrupted societies of Visconti any day – and I find this among his more mannered and calculated films, so take my complaints as you will. I dare say it won’t convert any new fans, but if you love the sick soul of Europe in sixties cinema, this is quite the modernist contemplation of abstracted lives in the new urban world.Mastered from a new digital restoration from a 4k film transfer and it looks beautiful, clear and clean and sharp. You’ll notes stray hairs present in a couple of shots; I don’t believe they are print issues but artifacts from the camera negative or the editing process. Both Blu-ray and DVD editions include two original interview featurettes (one with film critic Adriano Aprà and film historian Carlo Di Carlo, the other with professor Giuliana Bruno discussing the role of architecture in the film) and a booklet with an essay by critic Richard Brody and a 1961 article by director Michelangelo Antonioni. 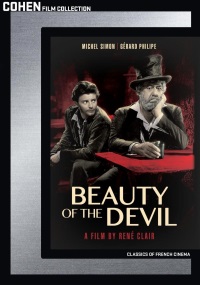 The Beauty of the Devil (Cohen, Blu-ray, DVD) is René Clair’s playful take on the Faust legend, which stirs whimsy into the tragedy of a scholar who sells his soul to the devil. As the film opens, Michel Simon is the frumpy old Professor Henri Faust, a sheepdog of a scholar disappointed in himself as he prepares to retire without making his mark on the world, and the young and handsome Gérard Philipe is the seductive devil Mephistopheles, but fear not. To prove his power, the devil gives Faust youth and the actors swap roles, with Philipe’s young Faust the rejuvenated romantic discovering everything his missed in a life of scholarship and Simon playing the devilish clown as the bearish Mephistopheles, scheming to compromise and corrupt Faust at every turn with a twisted grin and a gleam in his eye.