Gillian Anderson’s performance as Lily Bart in The House of Mirth is weirdly un-modern — the actress seems to have tapped directly into the mindset of the Edith Wharton novel, to a style predating ironic distance. Anderson maintains this even though the film’s dialogue and line readings are (rightly so) pitched in a way that heightens the artificial nature of the New York social scene, circa 1905. Anderson, whose performance often has a trapped, corseted intensity, gets Lily’s tragedy: It’s not that Lily doesn’t understand the rules of the game — it’s that she does, but she thinks her wit and beauty can skirt that calcified code.

END_OF_DOCUMENT_TOKEN_TO_BE_REPLACED

A biopic of Emily Dickinson sounds like a terrible idea, and it probably would be if it unfolded along conventional lines. But what if it were as unconventional as Dickinson’s poetry? I don’t mean a movie that is la-di-dah “poetic,” with out-of-focus shots of blossoms falling as classical music plays. What if the cinematic approach to the poet’s life could approximate her eccentric punctuation—full of dashes where commas usually roam—her abrupt shifts in focus, and her piercing gaze at eternity? If you could do that you’d have A Quiet Passion, an appropriately odd film from the British director Terence Davies.

These discussions are held in the screening room of Scarecrow Video on the second Friday of every month and are free to attend. The Seattle Channel records and presents many of these a few weeks later on the Seattle Channel.

You can also watch it on the Seattle Channel website.

Keep up with the discussion at the Framing Pictures Facebook page. The Long Day Closes, Terence Davies’s autobiographical 1992 film, slips us into a kind of reverie, a memory of growing up in 1950s Liverpool seeped in communal sing-alongs, movie dreams, and snatches of radio. The transporting power of culture, the warmth of family, the charge of adolescence is all carried in the images and sounds that Davies and stirred into an impressionistic mix. We don’t have to know the references to get swept up in them, because his evocation is so vivid its like we experience them — and the emotional power they have over Davies — along with him.

“Like most of the best autobiographies, The Long Day Closes reworks the past rather than merely re-creating it, and it doesn’t require us to share its author’s preoccupations and reference points to give pleasure,” write Jonathan Rosenbaum in his 1993 review, reprinted on his website.

NWFF brings the film back for a week-long run on 35mm (the proper texture for Davies’ celebration of his movie-love) for its 20th Anniversary.

The Imposter, the stranger-than-fiction documentary that was one of the most talked-about films at Sundance 2012, opens at The Uptown.

Unforgiveable, directed by Andre Techine and starring Andre Dussollier and Carole Bouquet, opens at The Varsity.

Hara-Kiri: Death of a Samurai 3D, Takashi Miike’s remake of the 1962 classic, at The Uptown.

Union Square is the latest from Nancy Savoca. Opens at SIFF Film Center.

On the Sly is a family-friendly Belgian film about a runaway girl. Opens at NWFF.

END_OF_DOCUMENT_TOKEN_TO_BE_REPLACED 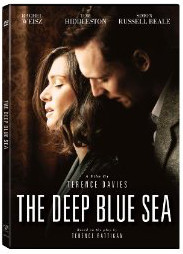 The film slips back and forth through the story, as if “drifting in and out of memory” (as Davies describes it in his commentary), and the grace of his filmmaking enhances that quality of floating through her story, both in the moment of intimacy and looking back in hindsight. Davies connects on a deep, devoted level to Hester (Weisz), a woman who clearly married young to a much older man (Simon Russell Beale), a very proper judge from the aristocratic classes and old money. She only realizes how much she has missed out on the swooning ecstasy of love and passion and sex when her heart is carried away by Freddie (Hiddleston), a former RAF bomber pilot struggling to find his place in the post-war world.

All this is suggested rather than explicated as we tour her odyssey, which begins at her lowest, most desperate moment and drifts back on her tumultuous emotional journey. She very much likes her husband, a decent and affectionate and generous man, but she is brought to life by Freddie. Even when it is clear that any permanent relationship between them is doomed (their experiences are simply too different for their characters to bridge), she never wavers: love over compromise, even at the cost of such pain. Davies embraces her story as both tragic and liberating.

This is Davies’ first fictional film in over a decade, since the magnificent “The House of Mirth,” and he seems to have invested every frame of the film with his exhilaration of making movies once again as well as a bittersweet quality of regret for the films he never made. His direction is loving, intimate, and exquisite.

Davies is sensitive to the texture of British films as they looked in the 1950s and uses filters and delicate, soft lighting to achieve a specific look. Unfortunately, the digital mastering doesn’t handle the effects well, exaggerating the grain of the film stock and distorting the texture. The colors and tones shift from scene to scene and there’s a haze across the image in many shots. This may not be a problem for many viewers and it is only a distraction on some scenes, but to my eyes it is not true to the image as seen in theaters.

On Blu-ray and DVD with supplements. Terence Davies is joined by Ian Haden-Smith (taking the moderator role) for a lovely commentary track, where Davies discusses his approach and choices. Though the track has a habit of going silent for long periods toward the second half, it is filled with Davies’ affection not just for the film but the contributions of his collaborators (“You can’t direct that!” he gushes at particularly inspired nuances of performance). His love of making movies and the power of cinema is evident in every comment.

Also features a 28-minute “Terence Davies Master Class” lecture about his adaptation and approach to the film, the 11-minute “Realizing the Director’s Vision” with Davies and collaborators discuss the making of the film, and interviews with actors Rachel Weisz and Tom Hiddleston, plus an accompanying booklet with essays by producer Sean O’Connor and film critic Scott Tobias.

Of Time and the City (Strand)

If Liverpool did not exist, it would have to be invented. And in some ways, that’s what Terence Davies does in his cinematic essay, a personal remembrance of a city that he recalls from his ambivalent perspective of troubled affection and critical commentary. Freely mixing history and remembrance, documentary and commentary, Davies offers up a very personal look at his hometown of Liverpool and the age in which he grew up in England. Though only brief moments of the film are actually shot by Davies himself (the rest is a mix archival newsreel clips, documentary footage, TV news clips and home movies), this is as personal as filmmaking gets and he personally narrates with a witty collection of literary quotes, song lyrics, movie titles and snatches of poetry delivered with a twist of his own sardonic humor. The port city and industrial center on the northwest coast of Britain is best known in America as the birthplace of the Beatles. They have little place in Davies’ remembrance. Though his commentary is backed by a collection of popular songs and snatches of classical music, itâ€™s not the music of the culture so much as of Davies’ life, and by the sixties he had tuned out with the coming of The Beatles and the Mersey Beat and turned to classical music. That was also the time he discovered that he was gay and the culture that he thought was his turned out to be quite hostile to him.

It’s chronological, both temporally and personally, from the post-war years to the present, and he takes us from B&W to color in a particularly delightful transition involving the crowds taking the ferry to Brighton. “They got on in black and white, but they got off in color,” he deadpans, and from that moment the film remains in color. It’s the modern world and nostalgia is gone as Davies recalls his coming of age in every way. His view of the church shifts to one of suspicion and distrust and a class consciousness seeps in as he observes the royal family (“another fossil monarchy”) and its lavish pageants of marriage and coronation while millions lived in poverty, destitute in slums all over Liverpool. He reserves his most caustic commentary for royalty and the national obsession with the royal family.