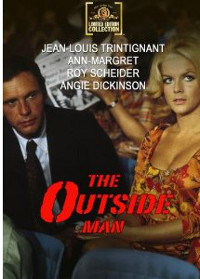 The Outside Man (MGM Limited Edition Collection) is out-of-town contract killer Lucien Bellon (Jean-Louis Trintignant), a Paris gunman hired to take out a Los Angeles mob boss, which he does with no fuss or loose ends. Or so he thinks, until he realizes that he’s considered a loose end when a local hitman (Roy Scheider in a largely unspoken performance) targets him as he prepares to leave the country.

Though set and shot in Los Angeles, with a largely American cast (including Ann-Margret as the proverbial hooker with the heart of gold who helps Lucien out, Angie Dickinson, John Hillerman, Alex Rocco, Talia Shire, and Georgia Engel) and a distinctive score with funky soul guitar and wah-wah pedal, this gangster movie turned cat-and-mouse thriller is a French production with a European sensibility shot on the streets of Los Angeles.

Director Jacques Deray may not be the best French crime movie filmmaker of his era but he has way of taking his time and methodically playing out his situations. He isn’t so much interested in action as atmosphere and his portrait of American culture gives the crime movie conventions a distinctive sensibility. Deray and screenwriter Jean-Claude Carrière are fascinated with the urban landscape of Tower Records and hamburger joints and busy streets, and the perspective is as much from their perspective as it is of the Paris hitman abroad. Lucien runs across hippie hookers and a Jesus freak hitchhiker, checks the news on coin-operated TVs in the bus station, and takes refuge with a single mother and her bratty son (a very young Jackie Earle Haley), where they watch “Star Trek” reruns over dinner.

The script is clever and woven through with witty asides and blasts of dark humor, and if it never really tense or suspenseful, it features a superb cast (including Michel Constantin as Trintignant’s Paris connection, who flies in to help settle the score), some very clever set pieces, and a great look at American urban culture from a European perspective. And the obligatory third act payback, a matter of honor and obligation doomed to mutual destruction, is both perfectly American and utterly French. Some gangster movie conventions are universal.

Sylvester Stallone’s meticulous job of screenwriting—street-poetry dialogue coupled with a healthy sense of humor and a sharp attentiveness to odd colloquialisms and fight-ring dialect—is largely responsible for making Rocky such an interestingly compassionate treatment of big guys against little guys. You might not think so as the film gets under way—a deliciously seedy venture into the life of a loser, a 30-year-old prizefighter named Rocky Balboa who never made it to the big time and has pretty much lost any hope of doing so. But thenceforth, Rocky tempts us onward and upward towards a crucial and emphatically hope-filled personal resolution in Rocky’s life, and that antagonism between (or perhaps balance of) the big against the little becomes not only Rocky‘s foremost theme but a part of its inner logic. There are the Apollo Creeds against the Rocky Balboas, but there are also the Big Moments against the privileged, nuanced, and seemingly offhand ones.

END_OF_DOCUMENT_TOKEN_TO_BE_REPLACED

Prophecy is actually two films, one of which I like. In the first hour or so the creature thatâ€™s been terrorizing the Maine woods is posited as both victim and avenger, much in the spirit of the put-upon creatures of Jack Arnoldâ€™s monster movies of the Fifties. Prophecyâ€™s creature, an outsized mutant bear whom the local Indians name Katahdin, is triply righteous: it is the victim of industrial manâ€™s incursion into nature, it is a defender of the sacred forest primeval, and it is out to reclaim its stolen young. Its sympathetic position is reinforced by association with the same morally justifiable rage that characterizes the Indians, who assert their land rights and environmental concerns against the encroachment of an expanding timber company. Verne (Robert Foxworth), a public health doctor, on an ecological mission to seek environmental reasons to stop the timber companyâ€™s growth, finds himself in the middle of a series of bloody killings for which the timber people hold the Indian activists responsible, while the Indians attribute the slaughter to Katahdin, their avenger. The essential dishonesty of David Seltzerâ€™s script is revealed in several too-pat occurrences that exemplify Seltzerâ€™s tendency to give mere lip service to the metaphors and moral dilemmas of his plot, in favor of getting on to more sensational matters; and itâ€™s here that the film turns sour.

END_OF_DOCUMENT_TOKEN_TO_BE_REPLACED

When Richard Fleischer visited the Seattle Film Society last spring, he bridled at the suggestion that Sven Nykvist, rather than he, had been responsible for the frame compositions in The Last Run: “That’s something a lot of people don’t understand.” Certainly no theory of film directing I ever entertained left room for the supposed metteur-en-scÃ¨ne to farm out that particular responsibility to the cameraman; yet it is a fact that there is a Wyler-like look to Ball of Fire (to grab the first Pantheon-class example that springs to mind) that is to be found in no other film by Howard Hawks, and the Wylerian on the premises was almost certifiably cinematographer Gregg Toland. In the lower reaches of film authorship it is not at all difficult to follow the visual spoor of, say, James Wong Howe as he labors for some mightily undistinguished directors (the best “films of Sam Wood” tend to have been shot by Howe and/or production-designed by William Cameron Menzies). And in the wretched The Drowning Pool of Stuart Rosenberg, a recurrence of insinuatingly asymmetrical widescreen compositions and lustrously dim tonal patterns flashes GORDON WILLIS, GORDON WILLIS like a neon sign.