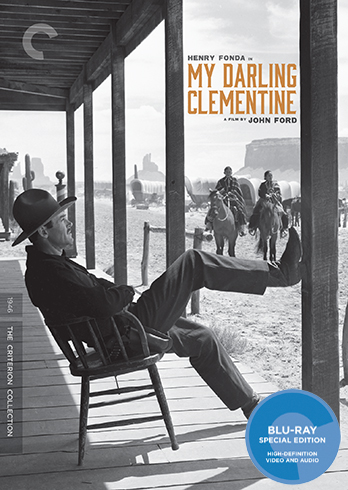 My Darling Clementine (Criterion, Blu-ray, DVD), John Ford’s sublime reinterpretation of the Wyatt Earp story and the Gunfight at OK Corral, rewrites history to become a mythic frontier legend and one of the most classically perfect westerns ever made.

Henry Fonda plays a hard, serious Wyatt Earp leading a cattle drive west with his brothers when a stopover in the wild town of Tombstone ends in the murder of his youngest brother. Wyatt takes up the badge he had turned down earlier and tames the wide open town with his brothers (Ward Bond and Tim Holt), waiting for the barbarous Clanton clan, led by a ruthless Walter Brennan (“When you pull a gun, kill a man!” is his motto), to give him an excuse to take them down. Victor Mature delivers perhaps his finest performance as gambler Doc Holliday, an alcoholic Eastern doctor escaping civilization in the Wild West and slowly coughing his life away from tuberculosis.

Ford takes great liberties with history, bending the story to fit his ideal of the west, a balance of social law and pioneer spirit. Though the film reaches its climax in the legendary gunfight between the Earps (with Doc Holliday) and the Clantons, the most powerful moment is the moving Sunday morning church social played out on the floor of the unfinished church. As Earp dances with Clementine (Cathy Downs), Fonda’s stiff, self-conscious movements showing a man unaccustomed to such social interaction, Ford’s camera frames them against the open sky: the town and the wilderness merge into the new Eden of the west for a brief moment. It’s a lyrical ode to the taming of the west when manifest destiny was an unambiguous rallying cry. Ford’s subsequent westerns became less idealistic.

Along with the 97-minute release version, Criterion has included a new HD transfer of the 103-minute pre-release version (which was also on the earlier DVD), which features footage cut from the release version as well as alternate scenes and other minor differences (such as alternate musical cues). The differences are illustrative of the differences between Ford’s artistry and love of communal atmosphere and 20th Century Fox boss Darryl Zanuck’s efficiency. Ford’s preview cut (which is not a director’s cut) is more open and lanky, always responsive to the community around him, and quieter (he resists burying scenes in orchestral scoring). The release version is tighter, more dramatically pointed, scored more emphatically, and features new shots inserted into Ford’s scenes. It’s a companion, not a replacement, for as we may mourn the loss of Ford’s sensitive and subtle moments, the release version is still the Ford masterpiece. It just got some help from Zanuck, who pared Ford’s loving background to strengthen the characters at the core. 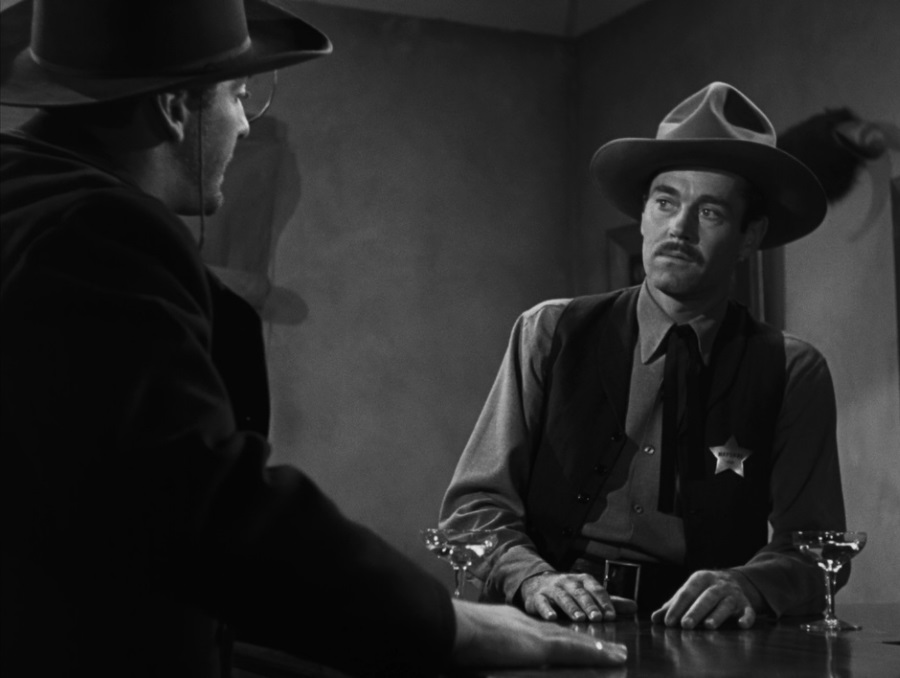 My Darling Clementine has been released in multiple editions on DVD by Fox. Criterion has created a new 4K digital master from the 35mm nitrate composite fine-grain held by the Museum of Modern Art for the Blu-ray debut and DVD upgrade. The previous DVD edition looked very good. Criterion’s release looks amazing, crisp and clean with a rich gray scale. The 103-minute pre-release version is an HD master which has not gone through the same digital restoration and shows scratches and grit but otherwise looks mighty fine in its own right.

Criterion has packed this edition with supplements. New to this release is informed and informative commentary by John Ford biographer Joseph McBride (who provides historical and production background as well as critical observations), the 19-minute video essay “Lost and Gone Forever” by Ford scholar Tag Gallagher (one of the best practitioners of this relatively new form of critical analysis), and a new interview with western historian Andrew C. Isenberg about the real Wyatt Earp. Carried over from the Fox DVD is the 40-minute documentary “What Is the John Ford Cut?” with UCLA archivist Robert Gitt, comparing the versions, commenting of the differences, and filling in the gap with production details and studio records.

First among the collection of archival supplements is the 1916 silent western short A Bandit’s Wager, directed by Francis Ford (his brother) and starring John and Francis. This is not a restoration and shows a lot of wear and tear but this transfer is stable and shows great detail, and it features a bright piano score by Donald Sosin.

Also features excerpts from the TV programs David Brinkley Journal (on Tombstone, from 1963) and Today (on Monument Valley, from 1975), the Lux Radio Theatre adaptation of the film from 1947 starring Henry Fonda and Cathy Downs, and a fold-out leaflet with an essay by critic David Jenkins.