Ed. note: republished to mark its availability streaming on Criterion Channel this month.

END_OF_DOCUMENT_TOKEN_TO_BE_REPLACED

The Cock-eyed World is a plodding, heavyhanded and rather entertaining sequel, with sound, to What Price Glory?. The Flagg-Quirt stuff is less than thrilling, partly because of Edmund Lowe’s mismatched assets and liabilities, partly because the repartee keeps reverting to the “Aw—sez you” tack. But there’s a good deal to savor at an agreeably crude level. An early bit of in-joke dialogue has Quirt lamenting the newfangled notions about how a soldier should talk—seems that it’s not right for a soldier to swear anymore. Quirt and Flagg quickly exchange insults about how the lack of swearing will reduce the other’s working vocabulary to practically nil. This sidelong reference to talking-picture taboos out of the way, Walsh, McLaglen, Lowe and friends go about the business of making a rowdy picture without benefit of its predecessor’s “silent” profanity.

Flagg keeps his pet monkey in a chamber pot; Quirt gets thumped by a jealous Russian strongman who seems to be named Sanavitch and who looses a truly Herculean spray of saliva at Quirt’s face from a range of about two feet; Quirt calls Flagg a horse’s neck and “You great big horse’s ancestor”; Flagg greets a ladyfriend with “How’s my Fanny?” and the comic stooge (El Brendel) introduces a map-bearing Latin girl as “the lay of the land” (“The what?” asks Flagg with a straight face and great interest); and yet another female strikes the stooge, a Swede, as “yoos my tripe.”

END_OF_DOCUMENT_TOKEN_TO_BE_REPLACED

Dante’s Inferno, the 1935 spectacle of destructive greed and carnival ballyhoo, opens on flames. It’s not hellfire but the boiler-room furnaces of an ocean liner where Jim Carter (Spencer Tracy) is ostensibly a stoker, though he manages to get out of work with a litany of manufactured injuries before he’s tossed out. He’s a born con man and hustler and he lands in his element: a carnival midway. When he’s shown a little kindness by Pop (Henry B. Walthall), the operator of a sleepy concession known as “Dante’s Inferno,” a mix of haunted house and cheap museum dedicated to the lessons of “the greatest poem ever written” (in Pop’s words), he returns the favor by taking over as pitchman and barks up a crowd for the attraction. The partnership becomes family when he falls for Pop’s pretty daughter Betty (Claire Trevor) and they have a son. It’s the beginning of a classic (and not particularly original) rise-and-fall drama of a rapacious man who tramples those who stand in the way of his ambition and leaves a trail of destruction as he bribes, blackmails, cheats, and cuts corners on his way to the top of the amusement racket, with just enough time left for a last-minute act of redemption.

This was one of Tracy’s final films for Fox before he left for MGM, where his talents were given a more respectful showcase. Now I’m not actually a big fan of Tracy but I confess to having a new appreciation for the actor thanks to those scrappy, bouncy Fox films of his early career. A lot of those scripts are undercooked (like this one) and the productions are sometime rushed but Tracy overflows with personality and the attitude of a guy who got wise knocking about on the streets. “I’ve had every trick in the trade kicked into me,” Jim tells Pop. “Now it’s my turn to kick back.” He presents himself with a sense of calm and control, however, like a man who is cagy about letting the world see what’s he’s thinking or feeling, which makes quite a contrast to guys like Cagney and Lee Tracy and the rat-a-tat streetwise heroes of the Warner street movies. 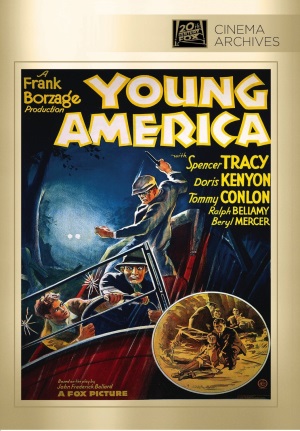 Spencer Tracy gets top billing in Frank Borzage’s 1932 depression-era drama as Jack Doray, a hardware store owner with the wise-guy manner of a mug and the high-society lifestyle of an industry magnate, but Young America is really about an orphan named Art (Tommy Conlon). Art is a hard-luck saint among the kids of neighborhood, a good boy with bad judgment, and Conlon, a child actor in his first major role, plays him with the spunky spark of a well-meaning kid with a quick temper, a can-do attitude, and a weakness for taking unattended cars on impromptu joy rides.

Based on a play by John Frederick Ballard, Young America is a script built on clichés and contrivances to give us a kid whose generosity of spirit and loyalty to defenseless friends, notably skinny little creative genius Nutty Beamish (Raymond Borzage, no relation to the director), constantly lands him in trouble. “This boy has the reputation of being the worst boy in town,” says the old Irish cop of his neighborhood to juvenile court Judge Blake (Ralph Bellamy), one of those paternal authority figures who mixes compassion with tough love. Art gets his compassion, but it only gets him so far when his latest “good deed” gets him arrested for robbing Jack Doray’s pharmacy (to get medicine for Nutty’s sweet but frail grandmother, of course).

Frank Borzage makes good use of Tracy, who was a busy actor for the Fox Film Corporation in the early 1930s but not yet a major movie star. His Jack is both a street-smart businessman and an arrogant high-society gent whose time is too valuable to waste on a minor legal manner that drags him into juvenile court.