Road to Nowhere is Monte Hellman’s first feature in 21 years. The director of The Shooting and Two-Lane Blacktop, a resolutely personal director who turned out drive-in pictures for Roger Corman and spent his career largely transforming work-for-hire productions into distinctive and mysterious films, spent years taking jobs as editor and second-unit director while one project after another failed to come together. Among his projects during that time was working with the Sundance institute, where he helped a young filmmaker named Quentin Tarantino workshop a film called Reservoir Dogs. Hellman signed on as executive producer and helped Tarantino get his film made. The role of educator and mentor eventually took him to CalArts, the private arts college where he has been teaching for the past six years.

Road to Nowhere is a welcome return by a master filmmaker. It’s a film about making a film and a film within a film, with an unknown actress (played by Shannyn Sossamon) hired to play a role in a film based on a murky true story about a politician who embezzled $100 million and disappeared with a young woman. She may or may not in fact be the very woman she is portraying on film. The mystery may be real or a fiction within the film. This film’s director, Mitchell Haven (Tygh Runyan), shares the same initials as Monte Hellman, and the echoes don’t end there.

This is a film aware of its existence as a film, constantly pushing against the nature of representation and storytelling. It’s a mystery where part of the mystery is what the mystery is really about. It’s the best film about the nature of filmmaking since The Stunt Man but with a very different approach to the blurring of life and art. Its name could serve as the alternate title to Hellman’s 1971 masterpiece Two-Lane Blacktop and its play with doubles and characters in reflection recalls The Shooting, his starkly abstract 1968 western. It is a film with imagery as rich as paintings and characters roiling with anxiety even as they appear frozen in space. And it is a film in love with the mystery of cinema, a film about characters playing characters, about stories that shift as they are put on film, shift again as they are placed beside other stories in the editing, and once again shift as the audience pieces together the elements of the narrative. American filmmakers seem unable to stop and watch a character be. Hellman finds the most revealing moments between the beats of action, where characters at rest let their facades down. Or do they simply put on a different character for us to see?

Road to Nowhere opens Friday, August 19, for a week at Grand Illusion in Seattle’s U-District. I had the opportunity to speak with Monte Hellman by phone and discuss the film, his return to filmmaking and his unique take on cinematic storytelling.

Because it is a movie within a movie, or if you like, it’s all the movie within the movie. Maybe everything we’re watching is what he puts into that laptop.

I see a director making a film based on a “real life event” and getting father and farther from the event itself because he was finding the story that he wanted to tell, which didn’t necessarily have anything to do with the event. He is searching for a story true to him, not true to the foggy facts of the mystery that inspired the script.

I think this is not untypical of making all movies. I think we start out with an idea and the movie, certainly this one, took over and it let us know what it wanted to be. It was a very interesting process. It was a process for me of letting go, of giving up on some of my concepts of being a control freak.

You’ve know Steve Gaydos, who wrote the screenplay, for years. He worked on Cockfighter almost 40 years ago and wrote the scripts to a number of your films. Did he write this original script specifically for you?

END_OF_DOCUMENT_TOKEN_TO_BE_REPLACED 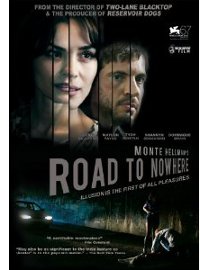