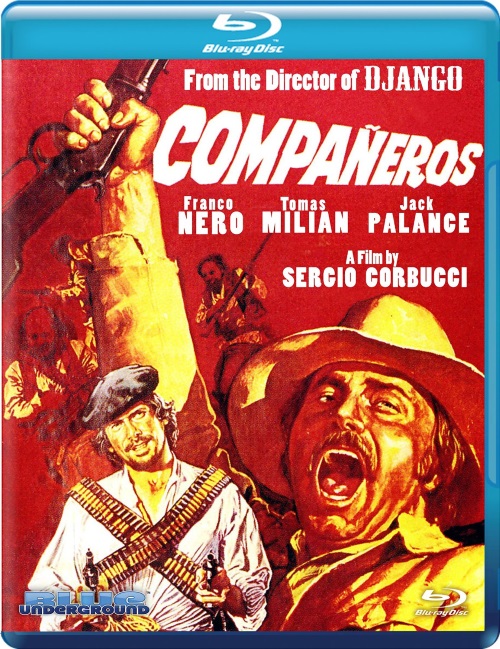 Compañeros (Blue Underground, Blu-ray) is an ironic title, but then as a spaghetti western—a genre steeped in mercenaries and con men and double crosses—it would have to be. Swedish gun runner Yodlaf (Franco Nero), in Mexico in the heat of the revolution to sell his weapons to the highest bidder, and hot-headed Mexican peasant turned revolutionary officer Vasco (Tomas Milian in a beret that evokes Che Guevara) are certainly not compañeros by any stretch of the definition. It’s only good timing that prevents Vasco from killing the blue-eyed stranger, and orders from his gun-shy but glory-hungry General that sends him along on a quest to free the idealistic revolutionary leader Professor Xantos (Fernando Rey) from American captivity at Fort Yuma. They make a great screen team, verbally jabbing and prodding one another along the way even when they are forced to rescue one another (left to their druthers, they’d go on alone). Nero plays the witty, worldly cosmopolitan (and, blue eyes and lightly bleached hair aside, the most Mediterranean Swede in the cinema) and Milian the wily survivor, acting on impulse and lobbing insults to his Swedish partner between paeans to his twinkling blue eyes.

Sergio Corbucci is one of the three great Sergios of the spaghetti western (along with Leone and Sollima) and the director of two of the genre’s classics, Django (1966), which made a star of Franco Nero, and the Great Silence (1968). Compañeros (1970) leans into the political arena that Sollima specialized in, using the political chaos and opportunism of the revolution as a volatile cultural backdrop filled with warring factions and freelance mercenaries, while driving the film with capers and cons and capture and escapes. They cross the border, break a prisoner out of an American Fort, and tangle with a dope smoking bounty hunter with a wooden hand and a loyal falcon named Marsha. Jack Palance plays the laconic mercenary John, puffing on joints and smiling a crooked grin as he lazily springs traps and puts his prisoners to sadistic tortures, and his stoner delivery sends the film into a whole realm of weirdness.

Complicating things even more are the (not always clear) conflicts within the revolution, with the grandstanding General Mongo only in it for personal gain and the idealistic Xantos playing the Gandhi of the Mexican Revolution, a pacifist who preaches non-violence while everyone is trying to kill him. That includes the opportunist Mongo, who needs Xantos for his payday but also finds him a threat to his agenda. Sort of. The details are murky, but that’s hardly a problem for a genre all about betrayals and greed. And yet Corbucci, who helped define the the amoral tone of the genre in Django, develops a streak of idealism that builds through the film until it blossoms as a defining theme without any sense of irony or insincerity. While he may not embrace the pacifism of his inspiration Professor, Corbucci certainly respects his integrity, a virtue not always seen in the genre, and presents it without cynicism. And that is quite a feat in a film with a body-count and a mercenary cast of this magnitude. It’s a wily good time with a rousing finish.

The Blu-ray debut features both the American version and the disc debut of the longer Italian cut (with four minutes of additional footage). Both editions, which have been newly mastered from the original negative, offer the choice of English and Italian language soundtracks (the restored scenes to the Italian cut are only in Italian with English subtitles, making them easy to spot). Image quality is great and the DTS-HD Mono soundtracks have that distinctive spaghetti western sound of studio-recorded dialogue and post-synched library sound effects. Ennio Morricone’s soundtrack sounds great.

Carried over from the previous DVD release is commentary by film journalists C. Courtney Joyner and Henry Parke and the 17-minute 2001 interview featurette “In the Company of Companeros” with interviews with stars Franco Nero and Tomas Milian and composer Ennio Morricone.