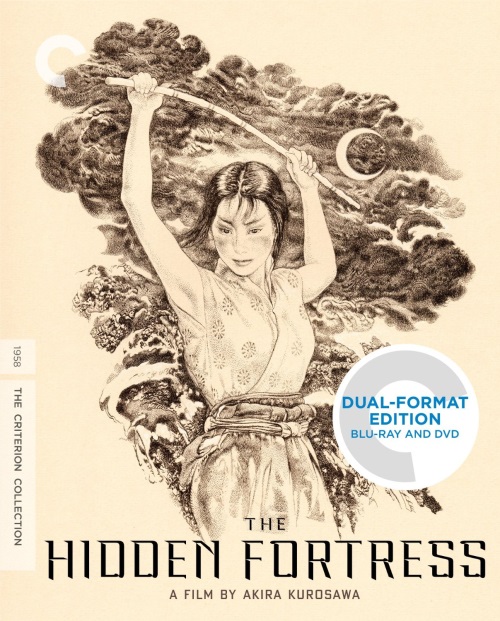 In The Hidden Fortress (Criterion, Blu-ray+DVD Combo, DVD), Akira Kurosawa melds western fairy tale adventure with Japanese history for a pre-Samurai era classic of a young princess and a determined General (the gruff ruthless, and often comically exasperated Toshiro Mifune) trying to escape from behind enemy lines with a fortune in royal gold. Long recognized as one of George Lucas’ primary inspiration for Star Wars (among other things, the bickering peasants who wander into the odyssey inspired R2D2 and C-3PO), it’s Kurosawa’s his first go at the widescreen format and he proves to be a master at it, dynamically spreading his compositions out to an epic scope and boldly setting his cascade of sharp action scenes against a magnificent landscape. It’s a grand adventure of flashing swords, thundering horses, giant battles and intimate duels, Kurosawa’s most purely entertaining film and one of his biggest hits.

Mastered from a 2K digital restoration with mono soundtrack and an alternate 3.0 surround soundtrack preserving the original 1958 “Perspecta Stereophonic” soundtrack and presented in DTS-HD on Blu-ray. New to this release is commentary by film historian and Kurosawa expert Stephen Prince and the documentary about the making of the film created for the 2003 series Akira Kurosawa: It Is Wonderful to Create. Carried over from the earlier DVD release is a brief interview with George Lucas, who talks of his love of the film and the work of Kurosawa. The accompanying booklet features an essay by film scholar Catherine Russell. 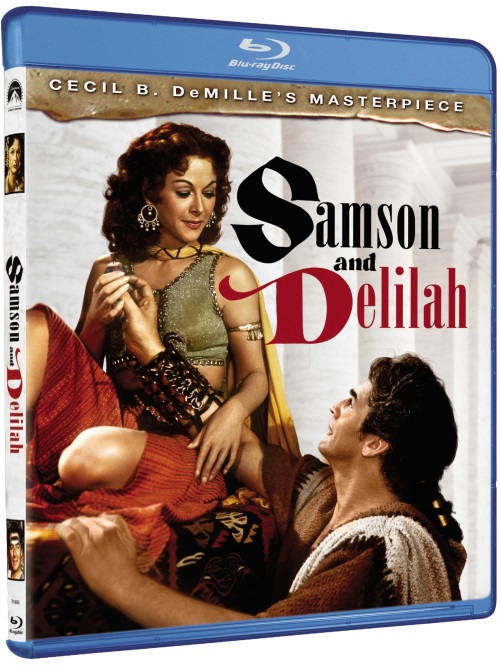 Samson and Delilah (Paramount, Blu-ray) was something of a warm-up by Cecil B. DeMille, classic Hollywood’s defining big screen showman, for his ultimate Biblical epic The Ten Commandments. This bible story was on a decidedly smaller scale but it had all the elements that DeMille had perfected back in thirties: treat the patrons to a spectacle of sin and flesh, then punish the bad behavior with a smiting of (dare I say it?) Biblical proportions. The script is dopey and the stars unconvincing, but DeMille puts on quite a pageant.

Victor Mature plays the brawny strongman Samson, who kills a lion with his bare hands in the first act. Half of the shots reveal that he’s tussling with a moth-eaten ruin but it’s still manly enough to rouse the passion of Hedy Lamarr’s Delilah. Samson heaves enormous building stones at enemy soldiers, all but takes apart a royal house in a wild brawl and for finale pulls down a temple around him with nothing but the strength of his massive arms. Never mind that DeMille’s special effects often lack the weight of conviction, it’s all in the showmanship and De Mille is as gaudy as they come. This has all lavish sets, slinky outfits, wicked Philistines, sexy maidens, and holy retribution in glorious Technicolor. Mature walks a plodding balance between grinning arrogance and righteous vengeance as God’s strong arm on Earth while Lamarr purrs through her turn as the Bible’s bad girl, a temptress with a wicked sense of vengeance. George Sanders contributes his brand of silky villainy as the Saran of Gaza and DeMille brings out the ham in him.

It’s been remastered in HD but the Blu-ray features no supplements except for the trailer.