A year after Oliver Stone elevated the phrase “Greed is good” to a satirical double-edged mantra in “Wall Street,” John Carpenter put it more bluntly in a scruffy little genre movie with a subversive subtext. “Why do we worship greed?” asks They Live in the opening scenes, as images of homeless people fill depressed urban slums and crowd around TVs to see how the rest of the country lives. This backdrop of inequities and economic hardship is a vivid backdrop to what might otherwise be a simple B-movie about an alien invasion hiding in plain sight, indistinguishable from the humans beside them but for one thing: they are the 1%.

John Nada (Roddy Piper), a strapping blue-collar worker riding the rails to find an honest day’s work, hikes into this economically depressed vision of Los Angeles. He believes in the American Dream, that working hard and doing his job will get him ahead, and he has no interest in the rabble-rousing conspiracy of pirate broadcasts that break into TV reruns. At least not until he dons a pair of super secret x-ray specs, hidden in a bunker of an underground resistance group, and suddenly see a very different world through these glasses of truth: billboards and consumer products carry subliminal messages and the rich are actually ghastly, gray, skeletal creatures from another planet.

Professional wrestler Roddy Piper is not much of an actor — his broad, magic marker performance stands out next to pros like Keith David (as fellow construction worker Frank) and Meg Foster — but he has a brawny presence. He’s perfectly serviceable as a wary observer in the first half, watching the suspicious gatherings in his neighborhood and the armed response of a L.A. cops who sweep through his homeless camp like an advancing army, and he’s oddly winning as a meaty, muscular action hero who is instantly politicized, albeit in a manner more fitting a drive-in action film than your usual politically-charged drama. “I’m here to kick ass and chew bubblegum, and I’m fresh out of bubblegum,” shouts Nada in blue-collar guerilla mode when he stomps into a bank and starts blasting the skull-faced aliens. It’s a ridiculous line and all the more appealing for it: the strong, silent everyman American steps up to defend his world with a machine gun and a flippant phrase that has since become something of a pop culture slogan among a certain breed of genre geek. 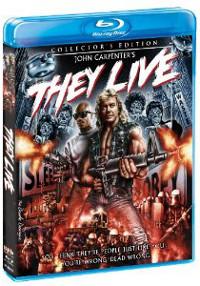 You can argue that They Live: Collector’s Edition (Shout! Factory) would have been a perfect Halloween week release. And you’d be right, of course. John Carpenter’s skewed invasion movie is witty and weird and has the most extreme knock-down, drag-out fistfight ever.

But I have to say, it’s weirdly even more perfect as an election-day release. Because really, who are these economic invaders from outer space but… Mitt Romney and the 1%.

Before I get inundated with hate-mail from conservative-leaning readers, let me make clear that, although Romney was nowhere in John Carpenter’s mind back in 1988 when the film was released, the politics were always pointed in his direction. The story is science fiction but Carpenter was driven by the inequities in society where the rich were getting richer, the middle class was disappearing, and the economic game was rigged by those with money and power. It was timely then and looks even more prescient now.

Roddy Piper’s working class hero John Nada, a man with no politics and a deep-seeded belief in the tenets of hard work and essential fairness, becomes a two-fisted activist when the veil is lifted (thanks to a pair of high-tech x-ray glasses). Piper is a brawny, broad presence, not much of an actor but spirited and likable, and Keith David is marvelous as his reluctant partner in rebellion, providing a moral grounding to Piper’s B-movie activism when the lie is revealed. Earth has become a third world colony for interstellar “free enterprisers” who preach the gospel of unregulated capitalism and the promise of advancement through hard work and perseverance while insidiously sabotaging all human efforts to get ahead. Their main took for control: subliminal messages, media control, and consumerist greed.

And two-fisted is the operative term here, as confirmed in the entertainingly interminable knock-down, drag-out alley brawl between Piper and Keith David. This is a classic example of genre filmmaking with a political punch, albeit in broad, sloganeering terms. “I’m here to kick ass and chew bubblegum, and I’m fresh out of bubblegum,” shouts Nada in blue-collar guerilla mode when he steps into a bank and starts blasting the skull-faced aliens. It’s a ridiculous line and, weirdly, has become something of a pop culture slogan among a certain breed of genre geek.