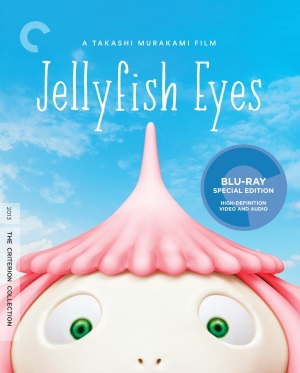 Jellyfish Eyes (Criterion, Blu-ray, DVD), the debut feature from visual artist Takashi Murakami, is a fantasy of childhood innocence and fantastical creatures come to life as Pokemon-like playmates. It’s also a strange conspiracy involving a cult of young researchers in a post-Fukushima world applying an alchemy of science and magic to a transporter device linked to an alternate reality.

Masashi (Takuto Sueoka), the young son of a widowed mother (still trapped in her mourning), moves to the idyllic little town next to an ominous, secretive research lab. He’s practically adopted by a flying creature that looks like a mushroom crossed with a jellyfish and turned into a rubber doll you might win from a carnival game, right around the time he starts having nightmares of his father, the tsunami that took his life, and jellyfish. Then Masashi discovers that every kid in town has their own creature, which they explain are called F.R.I.E.N.D.s and controled with the help of a handheld device. The boys send their F.R.I.E.N.D.s into battle in arena-like matches, much to the outrage of a shy girl (Himeka Asami) with giant sheepdog of a F.R.I.E.N.D. who hates the bullying culture that this violence inspires.