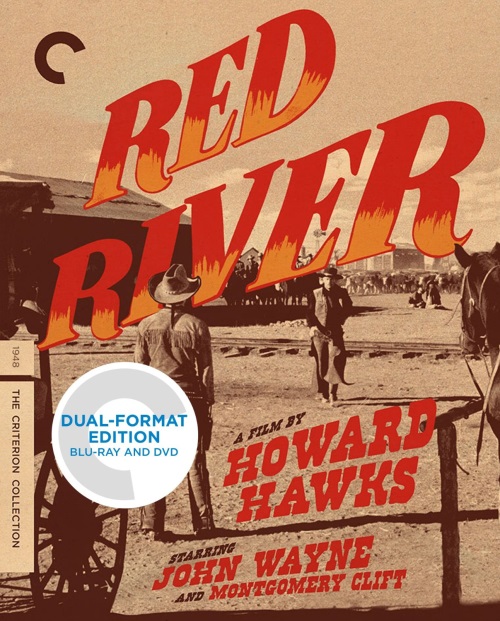 Red River (Criterion, Blu-ray+DVD Combo) – Howard Hawks’ 1948 ‘Mutiny on the Prairie’ is a frontier epic, the sweeping tale of a journey that can’t be made and the story of a son forced to battle the father he loves and adores. Monty Clift made his film debut opposite grand old icon John Wayne, playing the adopted son of the self-made cattle baron, and the opposition of acting styles is electric: laconic elder statesman Wayne wearing his character like buckskin, dominating the screen as upstart method actor Clift’s intensity burns a star right next to him.

Hawks’ style leans more to Wayne: measured and easy-going, he seems to let the characters take the story along with them, but behind that easy pace is a tale of madness, betrayal and vengeance that heats to a simmer under the sun of the parched prairie. “I never knew the big sonofabitch could act,” remarked Ford upon seeing Wayne’s performance, and he started casting Wayne in more complex and mature roles. But Clift was the real revelation and his internalized, psychologically-driven approach arguably pushed Wayne to reach for colors he’d never brought to a role before. The release was delayed while Hawks fought a legal battle with Howard Hughes, who claimed the film was similar to his own The Outlaw. Hughes lost but in the meantime Clift made The Search, which beat Red River to theaters and earned Clift his first Oscar nomination.

There are two versions of Red River and the longer pre-release version, which features “diary pages” of exposition between scenes and minute or two of additional footage, has been the version on previous home video releases. Hawks himself has said that he prefers the theatrical release, with runs 127 minutes (six minutes shorter than the pre-release cut) and features Walter Brennan narrating in place of the journal pages, and Criterion features a new 4K digital restoration of this version as well as a 2K restoration of the longer cut on both Blu-ray and DVD.

The four-disc combo release includes both films on Blu-ray and DVD plus new video interviews with Peter Bogdanovich (discussing the differences between the two cuts) and historian Lee Clark Mitchell (on the history of the western novel and the film’s debt to the literary tradition) and a video essay by Molly Haskell. Archival supplements include audio excerpts from Bogdanovich’s 1972 interview with Hawks and an interview with novelist and screenwriter Borden Chase. There’s a booklet featuring a new essay by Geoffrey O’Brien and a 1991 interview with Hawks’s longtime editor Christian Nyby, plus a new paperback edition of Chase’s original novel, previously out of print.

END_OF_DOCUMENT_TOKEN_TO_BE_REPLACED

Howard Winchester Hawks was home the afternoon of July 12, 1976. For some time there, it looked as if it wouldn’t happen. Kathleen Murphy had finally taken the leap and declared Howard Hawks: An American Auteur in the Hemingway Tradition as her dissertation subject. Then she decided she’d better talk with the man himself. Phone calls were made, and friendly sounds, but Hawks could never plan “that far ahead” because he was “working on a story.” When “that far ahead” got cut to a little over a day and a half, it was on, and there was a frantic scramble for a borrowed tape recorder (courtesy of Ron Green), plane reservations, and an L.A. homebase (provided by Rick and Leslie Thompson). That was Saturday; Sunday, we flew; Monday morning, we were driving in a rental car to get to Palm Springs by noon.

When we walked in out of the 98° air about five minutes late, three dogs checked us over while our host continued strongly to advise the person on the other end of his phone line that the air conditioning equipment he’d installed wasn’t working, and that he, Hawks, had come to the conclusion “you’re a goddam crook.” Serious doubts about the enterprise set in when I took an indicated seat on the edge of a Relaxacisor chair and inadvertently tripped the activator switch, precipitating a non-Hemingwayesque movement of the earth beneath me; and when I failed to locate the switch by conscious means, I became the object of an icy blue stare that made me feel distinctly like the “Fancy Vest” who’d been dumb enough to sidle toward his rifle under the assumption that Cole Thornton wouldn’t notice. An attempt to start recording with side two of the first cassette almost came as an anticlimax after that.

Still, we were there—and we stayed there. We had brought along about 30 hours worth of tape; we could have filled nearly twice that, despite several gestures of willingness to depart if we were being too much of a bother. Mr. Hawks, who had turned 80 just over a month before, had driven 350 miles the previous day, taking his son to and from a motorcycle meet in the desert; and he frequently kneaded a stiffening hand he’d once broken on Ernest Hemingway’s jaw. He talked. We talked. Whenever he left the room to find a sketch or article that had come up in the conversation, we prowled around looking at the original Red River D belt buckle on the wall, the title painting from El Dorado, the mugs painted HOWARD, FROM DUKE. The dogs clicked in and out of the immediate vicinity on the cool flagstone floor, occasionally crowding up to Hawks for special attention; he put on his sternest manner to dismiss them, but when, about the third time it happened, we managed to remark out loud that he wasn’t being very convincing, he broke into a richly pleased smile, and from then on there was a lot of laughing.

We didn’t go to Palm Springs to interview Howard Hawks for Movietone News, but in listening and relistening to the tapes and seeing the more-than-pleasure they brought to other people, we finally decided what the hell. The following represents but a portion of what we recorded. The Hemingway material, while valuable and provocative, has been left out here. We heard some of the anecdotes that previous Hawks interviews have included, and some of them are reproduced here yet again—partly because they will be new to some readers, partly because they’re wrapped around other material, partly because even many months later they still seem different to us because we heard them from Howard Hawks himself and watched him while he told them. There are scads of questions we wish we’d asked. Some we did ask didn’t go anywhere (like what happened to Malcolm Atterbury and Harry Carey Jr., listed in the credits of Rio Bravo but not on view in the film itself). Sometimes the ways Hawks misconstrued, or chose to misconstrue, the questions were almost as interesting and suggestive as more direct answers might have been; but mostly these have been edited out.

As days go, it will be hard to top. Just about the time the cassette went into the machine right, Mr. Hawks was looking at a copy of MTN 26, containing the John Ford memorial, and remarking that he’d “seen it before—about 50 times.” He meant the Monument Valley butte on the cover. We’ll let July 12 take it from there.

Well, Ford and I guess I were the only people that worked with Wayne that he didn’t want to know what the story was or he didn’t want to see the script—he just said, “When do we start?” … And of course he adored Ford. As a matter of fact, Ford came down here to die. And I used to stop in at his house and have a drink on the way to playing golf. One day I went in and he was laughing like hell, and I said, “What are ya laughing about?” and he said, “I was just remembering all of the things I’ve stolen from you.” I said, “I’ll make ya any kind of a bet that I’ve stolen more. Hell, you’d be dead before you’d even find out.” And one day—he was really laughing—he said, “I just thought of the best thing I ever stole from you. I had just a fair-to-middling picture up for an Academy Award [How Green Was My Valley] and you had a real good one [Sergeant York] and I beat ya out of it!” And when I went over to see him and he said goodbye to me about six times, I knew that something was happening and I phoned Wayne and I said, “You better get down here and see Pappy. If I were you I’d fly down.” He came down and he saw him just two or three hours before he died.
My opinion was that he was the best director in the picture business. It was very strange because we were both very pleased that the other one would steal from him. We didn’t have any feeling of jealousy or anything like that. When I made Red River with Wayne, Ford saw it and said, “I didn’t think the big son-of-a-bitch could act!” And he put him in two really good pictures immediately after, and within a year and a half Wayne was one of the biggest stars in the picture business.
Every time I made a picture with Wayne, Ford used to come down and stay with us on location, watching. And I’d say, “Can’t you wait to see it to steal something from it?”