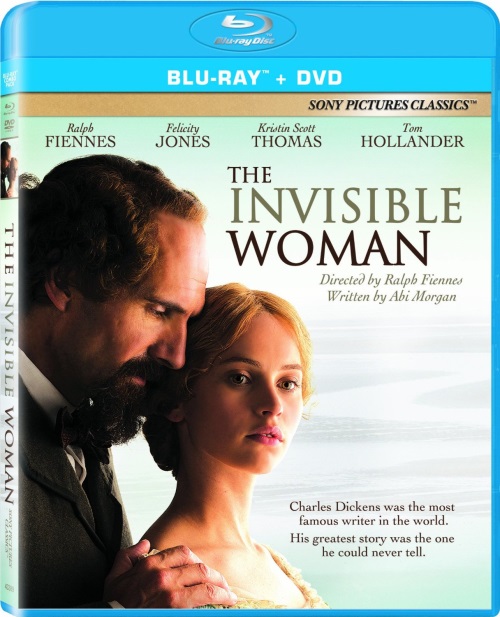 The Invisible Woman (Sony, Blu-ray+DVD Combo, Digital, On Demand) is a refreshingly mature adult drama of love and passion and society in 1880s England from director / star Ralph Fiennes. He plays Charles Dickens and Felicity Jones is the young actress Nelly Ternan, who became his mistress in a long-term love affair played out in the margins between private and public life.

This isn’t melodramatic or flamboyant and it doesn’t lean on the scandal. It’s about the people and their lives and feelings, including the hurt and humiliation suffered by Dickens’ wife Catherine (Joanna Scanlan), a dowdy woman who bore him ten children but remains a bystander in his very public life. For his part, Fiennes shows Dickens as a lively social creature, thriving on public attention as both famous author and stage actor, but the story is really about Nelly, who was 18 years old when she first met Dickens but tells her story decades later. As a music teacher at a boy’s school, she’s emotionally protective and only reluctantly tells the story of her past, a turbulent life that left her emotionally knocked about and far more worldly than her husband (easily the weakest character in the film).

It’s a handsome film, to be sure, but Fiennes is more interested in the complexity of characters and relationships, the social world of the time, and the maturity with which all of these characters deal with adult relationships. The maturity, of course, doesn’t prevent people from getting hurt. Tom Hollander is Dickens’ friend and fellow author Wilkie Collins and Kristin Scott Thomas is magnificent as Nelly’s mother, a worldly woman who gives her consent to the relationship. Not because she thinks it will advance anyone’s career, but because she sees how happy her daughter is with Dickens.

The Blu-ray+DVD Combo release features commentary by and an interview with director / actor Ralph Fiennes and actress Felicity Jones (the interview is from the “Screen Actors Guild Foundation Conversations” series and runs 26 minutes). Also includes the “Toronto International Film Festival Press Conference” (21 minutes) and “On the Red Carpet at the Toronto Premiere” (16 minutes).

Some filmmakers become genres unto themselves. A “Wes Anderson movie” very quickly came to mean something specific, regardless of its definition as coming-of-age picture (Rushmore), Salingeresque family comedy (The Royal Tenenbaums), or animated kiddie fare (Fantastic Mr. Fox). If you’ve absorbed the storybook Anderson style, you won’t find too many surprises in The Grand Budapest Hotel, his eighth feature. But you will find a disciplined silliness—and even an occasional narrative shock—that vaults this movie beyond the overdeveloped whimsy that has affected Anderson’s work since The Life Aquatic With Steve Zissou.

By the time of its 1968 framing story, the Grand Budapest Hotel has been robbed of its gingerbread design by a Soviet (or some similarly aesthetically challenged) occupier—the first of the film’s many comments on the importance of style.

Kathryn Bigelow’s 1987 genre-juicing vampire film Near Dark opens close up on a leggy mosquito poised to tap into screen-spanning flesh. Apt epigraph for a film about heartland bloodsuckers; but also your ticket into any of the intensely sensual, romantically nihilistic excursion – The Loveless, Blue Steel, Point Break, and now Strange Days – head-tripped by this dark daughter of Hawks and Hitchcock. Bigelow’s movies gauge psyches and society in extremis, running on empty. Her nomadic protagonists, “riders” of one stripe or another, hooked on whatever “zap” best fuels them, cruise the nervous systems of her often hyperreal “outside” – unspooling ribbons of baked macadam, rain- and neon-slicked streets, granite-gray arches of breaking surf, even brightly surging brainwaves – trying to stay ahead of their own shadows.

Latterday kin to Hawks’s daredevil existentialists, Bigelow folk all hanker after heartstopping action and spectacle, the sort of “speed” that punches life up to top gear and outruns terminal ennui. Hanging out on the edge of the world, emotionally and in the flesh, these are orphans to the bone – loners, outlaws, pariahs. Plugged into jerry-rigged “families” for dangerous shelter, their rage and despair often explode into demonic self-projections.