My films tell a little bit of the history of Italy.
—Carlo Lizzani

More than a decade before the French New Wave, a generation of Italian film critics and cinephiles challenged the high gloss and low ambitions of the Italian film industry under Mussolini with a wave of films that addressed social and political life during and after World War II, movies shot in the streets with a rough immediacy dictated as much by threadbare production resources as by stylistic choice.

Carlo Lizzani was not simply shaped by Italian neorealism. He helped create it. As a film critic and an active leftist, he wrote manifestos promoting neorealism and wrote a respected history of Italian cinema in 1952. He co-wrote and assisted on the productions of Roberto Rossellini‘s Germany Year Zero (1948), Giuseppe De Santis’ Bitter Rice (1949), which earned him an Academy Award nomination and Alberto Lattuada‘s The Mill on the Po(1949). He made documentaries before making his feature directing debut with the resistance drama Attention! Bandits! (1951), a film he got made by organizing the workers of Genoa into a filmmaking cooperative, and he returned to documentaries at the end of his career, making films about the great Italian directors he knew and admired: Luchino Visconti, Roberto Rossellini, Giuseppe De Santis. His love of cinema and his passion for politics and history came together in his 1996 feature Celluloid, which dramatizes the making of the pioneering neorealist masterpiece Rome Open City.

Between these poles, Lizzano had a thriving career making genre films—westerns, crime thrillers, war dramas—in the 1960s and 1970s. It was more than simply a matter of necessity. He loved genre pictures. They were also a superb vehicle for smuggling political commentary into popular cinema. It was a good fit for a filmmaker with an affinity for rebels and outlaws.

The austere credits of The Gospel According to Saint Matthew and a dignified dedication panel “To the Dear, Familiar Memory of Pope John XXIII” are accompanied on the soundtrack by pagan-sounding music; and the first shot in the movie proper—a lingering, static, flatly lit closeup of a barely pubescent Virgin Mary—permits the viewer time to acquire his perceptual bearings and further encourages the mood Pasolini steered us toward during the credits: His straightforward commingling of unprettified earthbound realities, a literal presentation of supernatural occurrences, and the viewer’s complacent expectations about them both, force much of the labor onto our side of the screen—underscoring Pasolini’s insistence on the viewer’s own responsibility to make order of the intensely rapid succession of images and swiftly spoken words that fly by in an acceleratingly paced, just-over-two-hour running time. (An index to the film’s speed and compression: It’s the only foreign film for which I’ve ever wished a dubbed print—so dichotomous was the choice at first viewing between watching and reading the movie—until seeing a loathsomely dubbed version restored me to my senses.)

Celebrating the director’s methodology, when the screen time arrives for it Jesus begins his ministry at a breakneck pace, admonishing some travelers to repent as he hurries past them on the road; Pasolini cuts back to the travelers for a low-comedy but credible Who-is-this-clown? take; and barely another beat has passed before we’re at the Sea of Galilee and Jesus is punning to lure fishermen to follow him. With the barest minimum of footage given to establishing shots or transitions, Pasolini spends the next 90 minutes or so studying miracles and parables and Passion events with the same economical, linear energy that heralded their beginning.

END_OF_DOCUMENT_TOKEN_TO_BE_REPLACED

Pier Paolo Pasolini directs Maria Callas in his 1969 interpretation of the ancient Euripides play, a tragic myth turned Greek tragedy that he stages in a stripped down, almost abstracted collision of the primitive and modern cultures in an ancient land.

Pasolini strips the play down to symbolic, almost abstract expressions of scenes and ideas, like the cinema equivalent of hieroglyphics. The setting and backstory pours out in a long opening monologue delivered by a centaur (Laurent Terzieff) to the infant Jason, who he raises to manhood (played by the handsome but inert Giuseppe Gentile) over the course of the complicated family history lesson, and himself transforms from centaur to human man. Jason doesn’t even notice, perhaps too distracted by his foster father’s claim that: “In fact, there is no god.” Quite a statement for an ancient thinker, and one that I suspect is more Pasolini than Euripides.

With that, Pasolini cuts from the lush setting of this idyllic existence to the barren white desert hills of a primitive society where the priestess and sorceress Medea observes (and, at times, participates in) the brutal religious rites and human sacrifices of this sun-worshipping culture to their elemental god. Her expression is hard, betraying no emotion, but Callas’ mighty presence gives her a sense of power over this society, even if that position demands that she, too participate in punishing rituals. This is the barbaric culture that worships the Golden Fleece, which Jason has been sent to retrieve by his uncle the King (Massimo Girotti), and she betrays her people and her pagan faith to follow Jason back to his home in Greece, where he bears his children but is never completely accepted into his society. The once powerful sorceress has lost her power in this alien world but is still feared by the King. When Jason abandons her for marriage to the King’s daughter and breaks his oath to look after her when she is banished by the King, her fury reignites her power and spurs her on to take terrible revenge. For Pasolini, it’s less a human tragedy of promise and betrayal than a statement of cultures in collision, of power and sexual politics. Tellingly for a director struggling between Catholic upbringing and Marxist atheism, it is also the surge that recharges her waning powers and reconnects her with the gods she left behind to take her vengeance.

La rabbia, which translates to “the anger,” is one the rarest of films in Pier Paolo Pasolini’s filmography and one of the most unusual projects for a director with a filmography filled with the unconventional, the controversial and the aggressively extreme. 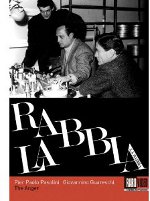 It began as a personal rumination on the politics and history of the years since World War II from the perspective of the famous poet, filmmaker and committed Marxist, constructed entirely out of newsreel clips (Pasolini didn’t shoot a frame of original footage) with original commentary written by Pasolini as a mix of essay and free verse. After his film was complete, the producer decided that the film would have fewer censorship issues and better commercial prospects with an opposing view from the alternate (aka right wing) end of the political spectrum. Giovanninio Guareschi, an author, journalist and political cartoonist of decidedly right wing leanings, was commissioned to present the conservative voice. Pasolini was appalled by his contribution and distanced himself from the production, which was attacked by both the right and the left. After a nominal release it was withdrawn and practically disappeared, at least in its original form, until a 2007 restoration.

“Two ideologies, two opposing tendencies answer a dramatic question….,” reads the opening of the film. “Why is our life dominated by discontent, by anguish, by the fear of war, by war?” That question begins both sections of this “film in two parts,” which tackles the same general history with the same raw material (archival newsreel footage, newspaper and magazine clippings, photos and works of art) and, in many cases, the same subjects: the British monarchy, the Catholic Papacy, the power of the United States, the Russian space program (as of 1963, the Soviets were supreme in the space race) and the liberation of countries previously under the colonial rule. If they share mutual distrusts of certain super powers and of the modern world in general, it is for radically different reasons.

Updating the setting of de Sade’s novel, Pasolini’s Salò proposes that in the final months of fascist rule in northern Italy a quartet of authorities (a noble, an administrator, a banker, and a monsignor) sign a pact, intermarry with one another’s daughters to ensure solidarity, systematically capture the most attractive children of their political enemies, and spirit them away to a country manor house, there to subject them to unspeakable indignities in their unrestrained pursuit of perverse pleasure, from masturbation and sodomy, through coprophagia, to torture and death. Though the power of the film’s images might be easily achieved, simply by evoking the inherent shock of the acts depicted, nevertheless, power there is, in abundance, and Salò does not slip easily (or ever) out of one’s mind. Is the violent reaction against Salò that has occurred in this country a reaction against the acts that it depicts, against the (patently faked) depictions themselves, or against the fact of that depiction, the very idea that someone should make a movie about such things?