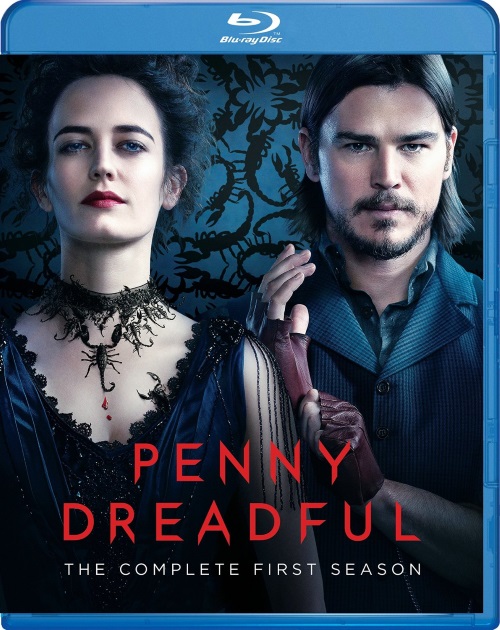 Let’s catch up on a month of TV releases. And as Halloween is coming, let’s begin with some shows from the dark side.

Penny Dreadful: Season One (CBS, Blu-ray, DVD) takes a premise similar to the graphic novel The League of Extraordinary Gentleman: the characters and supernatural beings of 19th century horror literature all exist in the real world.

Oscar-winning screenwriter John Logan created this series, which revolves around a trio of original characters who take on the supernatural underworld of London, and scripts all eight episodes of the debut season. Sir Malcolm Murray (Timothy Dalton) is searching for his daughter Mina, who has been taken by a vampire (as in the novel Dracula), with the help of Vanessa Ives (Eva Green), a medium with a troubled past and a possible curse upon her. Josh Hartnett is the American Ethan Chandler, who comes to London as part of a Wild West show and hires himself out as a gunman to the team. Assisting the team is Dr. Victor Frankenstein (Harry Treadaway), whose first experiment (Rory Kinnear) has returned to demand a mate, and weaving through their stories is the decadent Dorian Gray, who woos Vanessa. One episode reworks The Exorcist and the season finale suggests that Bride of Frankenstein and Doctor Jekyll and Mr. Hyde will be part of the story next season.

The title captures the tone of the series and horror director J.A. Bayona (The Orphanage) sets the ominous, shadowy mood as he helms the first two episodes. It features impressive production values, strong writing, excellent actors, and a Gothic atmosphere that favors mood over spectacle, and Logan intelligently and creatively weaves the classic stories into this original drama. Dr. Frankenstein after all abandoned his first born, essentially setting the moral yardstick for his offspring, and the show offers a compromised human Frankenstein and an angry, outraged creature with both the sensitivity and the emotional instability of a child that can rip the heart out of another person. And while the vampire of this tale is never referred to as Dracula, the show offers an interesting take on the story. But it’s the original characters that are the most compelling, notably the rocky relationship between bereft father Malcolm and tormented Vanessa, a kind of foster daughter in the shadow of his absent daughter, both needed and rejected by Malcolm. If blood defines family in the first episodes of the show, loyalty and sacrifice defines it by end of the season, and it is the American cowboy who brings that lesson home. I have a fondness for dramas built around makeshift families and offbeat teams who earn the loyalty of one another, and through the course of the season, Penny Dreadful turns into that kind of series.

It’s one Showtime’s most popular and most acclaimed shows to date, and outside of a Showtime subscription or a la carte digital purchases of individual episodes, disc is the only way to see the show. If you’re a horror fan, it’s definitely worth it. Eight episodes on Blu-ray and DVD, with numerous featurettes and bonus episodes of other Showtime original shows.

More TV on disc and streaming at Cinephiled