One of the most eagerly anticipated offerings at Cannes this year, Shadow of the Vampire is the first feature in a decade from E. Elias Merhige, whose only previous effort was the one-of-a-kind avant-garde feature Begotten (1990). That amazing film visualized a timeless cycle of birth, death, and regeneration, in Druidic images at once primeval and postapocalyptic, that seem to have been developed on protoplasmic stock and projected with a flickering bioluminescence. What more appropriate directorial casting, then, for an imaginary (?) account of how F.W. Murnau, the cinema’s first poet of the supernatural, might have made Nosferatu, the first, albeit unofficial, screen version of Dracula.

END_OF_DOCUMENT_TOKEN_TO_BE_REPLACED

As a German filmmaker, we had no real fathers to learn from, no points of reference. Our father’s generation sided with the Nazis or was forced into immigration so we were a generation of orphans. And you can’t work without having some sort of reference as to your own culture and the connection and continuity, so it was our grandfathers–Murnau, Fritz Lang, Pabst and others–who were our teachers, our guidance. For me, Murnau’s film Nosferatu is the best German film ever, and I somehow needed to connect, I had the feeling I had to go back my own roots as a filmmaker. As an homage to him I chose to make this film.”
—Werner Herzog, 1999

One could never accuse Werner Herzog of choosing projects by their commercial prospects. This is, after all, a filmmaker who hypnotized his cast for Heart of Glass and made a documentary about waiting for a volcano to erupt. So the decision to follow up his devastating Stroszek with a remake of a revered masterpiece of world cinema with a cast of international stars—Isabelle Adjani, Bruno Ganz and Klaus Kinski reunited with Herzog for the first time since Aguirre, the Wrath of God—was about more than making money from a vampire movie. (While the film is based more on Murnau’s film than Stoker’s novel, Herzog maintains that is “not a remake, it’s a free version of his Nosferatu…”) It was a tribute, of course, and he kept the title Nosferatu even though he renamed the character Count Dracula (one instance of Stoker over Murnau). It was also a natural subject for a filmmaker who focused on outcasts and obsessives and landscapes rich in natural grandeur and mythic power. 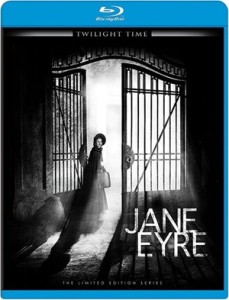 The 1943 Jane Eyre (Twilight Time, Blu-ray) stars Joan Fontaine as Jane, the heroine of Charlotte Brontë’s classic Gothic romance about a meek orphan hired by a brooding aristocrat to be governess to his young ward, but it’s Orson Welles who dominates the drama with both his dark, electric presence as Edward Rochester and his influence behind the scenes of the production. He’s a bear of a Rochester, a rough, dark figure more at home with his hounds and horses than with people, and Welles drops his voice to a rumbling growl whether he’s barking orders or letting his guard down for a moment of intimacy.

The handsome production, one of the romantic classics of the forties, is directed by the literate British import Robert Stevenson but Welles had a considerable hand in the production, from the visual design of the production to script revisions, all of it uncredited. The result is a beautiful piece of Hollywood Gothic, sculpting a Victorian England completely out of Hollywood artifice and soundstage magic through magnificent set design, dramatic lighting and healthy helpings of stage fog. Just look to the cover of the disc for a sense of the visual atmosphere. This is one of the most expressionist American films of the era and Welles had no small hand in that. 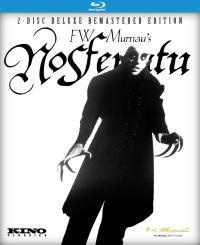 F.W. Murnau’s silent classic Nosferatu (Kino, Blu-ray) is the first great vampire film, an unauthorized adaptation of Bram Stoker’s “Dracula” (it was tied up by the Stoker estate for years) which recreates the famous bloodsucker as a feral ghoul: bald, fanged, clawed, a bat-like creature whose bloodlust battles his sexual lust for the virginal Ellen. Count Orlock (played by the spindly, skull-headed Max Schreck) is a veritable force of evil, carrying disease and destruction with him, and Murnau shoots him as an eerie creature of the night, rising like a corpse from his coffin when the sun goes down and skulking in shadow. This Blu-ray debut was mastered in HD from the archival 35mm restoration by the Friedrich-Wilhelm-Murnau-Stiftung and features separate versions of the film, one with newly-translated English intertitles and another with original German intertitles (with optional English subtitles), both color tinted and accompanied by Hans Erdmann’s original 1922 score. It also includes the supplements from the previous Kino release: 52-minute documentary “The Language of Shadows: The Early Years and Nosferatu,” a three-minute featurette on the digital restoration, lengthy excerpts from other eight other Murnau silent films, and a stills gallery.

DVD has been as good to F.W. Murnau as any silent legend has a right to expect. Milestone Films released a gorgeous edition of his final film, Tabu, back in the early days of DVD. Flicker Alley released the 1922 rarity Phantom (restored by the Friedrich Wilhelm Murnau Foundation) a few years ago. Fox collected his American features — Sunrise (one of the unequivocal masterpieces of world cinema) and City Girl, along with a documentary tribute to his lost drama Four Devils — in the magnificent box set Murnau, Borzage and Fox. And Kino, which released the American versions of Murnau’s Nosferatu, The Last Laugh and Faust on DVD, has been faithfully upgrading and adding to the library with stateside releases of restorations helmed by the Friedrich Wilhelm Murnau Foundation. Murnau: A Six DVD Box Set

is an upgrade from Kino’s five-disc The F.W. Murnau Collection from 2003. The disc of Tartuffe is the same the rest of the set is either upgraded or brand new: the recently restored German editions of Nosferatu and The Last Laugh (previously available from Kino in two disc “Deluxe Editions”) and the DVD debuts of The Haunted Castle and The Finances of the Grand Duke and the original German version of Faust, which are also available separately (with Faust offered in a two disc “Deluxe Edition” featuring the earlier DVD release). Milestone’s Tabu, which was on the earlier set, is not here, but it is available separately from Milestone. Confusing? Yes, it can be. If you’ve been picking up the restored upgrades all along, you’ll probably want to skip the box and just pick up the three DVD debuts separately. If you don’t have any of the restored versions, however, the box set is an essential instant collection for the Murnau fan or the silent movie obsessive.