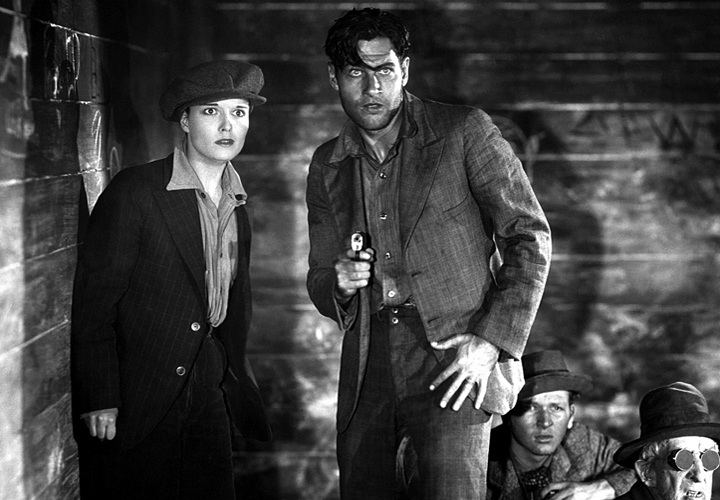 Children of Divorce (1927) (Flicker Alley, Blu-ray+DVD) is one of those silent films that isn’t exactly a classic but possesses an irresistible allure. The star power and cinematic charisma of Clara Bow, the definitive flapper of the silent era, and young Gary Cooper lights up this somewhat silly melodrama of the young, beautiful and idle rich who treat marriage as a game.

It opens on a “divorce colony” in Paris, where the recently single society players goes to pair off once again in hopes of upgrading. To grease the wheels of romantic negotiations, the kids are dropped off in an orphanage filled with the inconvenient children of the newly (and temporarily) single. That’s where little Kitty Flanders is abandoned to the nuns, and where she meets her new best friends: Jean Waddington and Teddy Lambie, also abandoned by divorced parents. It’s heartbreaking and heartwarming at the same time.

Jump ahead to “America – Years Later” and Clara Bow is the party girl spitfire Kitty Flanders, raised by an oft-divorced mother to marry into money, and Cooper is her best friend Teddy…

G.W. Pabst’s The Joyless Street (1925), the Centerpiece screening on Saturday night, is a landmark drama of social commentary, a savage portrait of Germany after World War II, when rampant inflation and record unemployment plunged an entire class into poverty and widened the gulf between rich and poor into a veritable ocean. Decadence and desperation and degradation: this has it all, and with a drumbeat of social drama drawn in stark images and situations.

Greta Garbo takes her first role since being “discovered” in Gosta Berling’s Saga (1924) and is marvelous as the devoted daughter of a widower civil servant, basically taking care of her father and her little sister while he gambles their entire future on a stock market bet (a rigged game that we know is doomed to ruin them). Endlessly nurturing and sacrificing herself for others, we know where she’s headed when she ends up in hock to Frau Greifer (Valeska Gert), the neighborhood clothier with the secret club in the back and the procurer who turns desperate women into hookers for her male clients. Garbo is elegant and dignified without tipping into the Hollywood glamour that would soon define her (and fix her teeth), the honest working class innocent about to be savaged by the economic piranhas circling the stream.

The ostensible lead, however, is Asta Nielsen, the thirtysomething German superstar playing the teenage daughter of an impoverished and pious war veteran who accuses her of prostitution and essentially pushes her to it out of necessity. Dressed to the hilt by a smitten banker in fashions that make the Ziegfeld Follies look restrained, she goes through the movie like the walking dead, numb with shock at her station, which apparently her foreign fat cat client finds alluring, if confusing. Werner Krauss plays the butcher, who hordes his products to trade for sexual favors and wields the power of his position like a petty tyrant, and there’s an American aid worker, an aspiring young banker trying to follow in his market-manipulating boss’s footsteps, and a decadent young woman ready to trade her affections for the richest beau, plus there’s a couple of murders, a fiery suicide, a healthy dose of madness, and lots of lurid spectacle.

And yet watching the film is tough. Manny Farber’s designation of “elephant art” came to mind while working through the screening. This is long (over 2 ½ hours), important, heavy, full of social commentary and dreary lessons, and it goes on and on, teasing us with the threat of degradation of its struggling characters while showing damaging actions of the rich. It’s also overloaded with storylines, top-heavy with major characters (some of whom suddenly disappear for long periods, perhaps due to missing footage), confusing and complicated and at times clumsy in its storytelling.

END_OF_DOCUMENT_TOKEN_TO_BE_REPLACED

The most anticipated event at any silent film festival is the premiere of a “lost” film, rediscovered and restored. Bardelys the Magnificent, the 1926 swashbuckler starring John Gilbert and directed by King Vidor, was long thought lost for good but for a brief glimpse in Vidor’s Show People. Then a single surviving print, in poor shape and missing a reel, was found in France in 2006. An exhaustive digital restoration was undertaken by Serge Bromberg (of Lobster Films) with David Shepard (of Film Preservation Associates) and others and the results are thrilling. Apart from a very effective reconstruction of the lost reel through stills and shots from a surviving trailer, it looks superb.

This was the last of five collaborations between Vidor, one of the class acts of the silent cinema, and Gilbert, at that time one Hollywood’s greatest stars. Both are at the top of their game; from the opening scenes they walk that fine line between swashbuckler and spoof with sure footing and unflagging confidence. Gilbert is the Marquis de Bardelys, an an infamous womanizer and the kind of character that John Barrymore did well, the arrogant aristocrat lover and rogue. Gilbert plays it with more dry wit and insouciance than Barrymore ever did. He’s helped immensely by the pithy gems of the intertitles written by Dorothy Farnum (this film features the finest and funniest intertitles of the festival and is a reminder of the often overlooked art of silent movie title writing), but his performance sells the lines. Within seconds of the opening images, he’s suddenly engaged in a fencing duel with the husband of his latest conquest (which he treats as rather familiar sport) and ends the scene by reconciling the two and driving them both out the front door, still tossing off dryly witty lines as it has all been a mere inconvenience. The story, adapted from the novel by Rafael Sabatini, turns on a challenge from a rival aristocrat (Roy D’Arcy, looking like an over-coiffed villain from the Richard Lester The Three Musketeers) to woo the stubbornly resistant Roxalanne de Lavedan (Eleanor Boardman), who already rejected the vain aristocrat. Boardman (who soon became director Vidor’s wife) is a modern presence in this costume picture of flamboyant manners. With minimal make-up and a direct, unshowy performance style, she stands in contrast to the rituals and elaborate shows of affection and outrage. It’s not hard to see how the frivolous Bardelys, a man who could marry any woman he wanted to (if, in fact, he wanted to), is smitten and transformed by this unpretentious, unspoiled, unfailingly honest beauty.

END_OF_DOCUMENT_TOKEN_TO_BE_REPLACED

I’ve traveled to Pordenone, Italy, three times to attend Le Giornate de Cinema Muto, the biggest, grandest, most dedicated silent film festival in the world: eight days of morning to midnight screenings of the masterpieces, rarities, rediscoveries and revelations. Yet in my own backyard (more or less) I’d never been to the San Francisco Silent Film Festival, the weekend-long celebration that unspools every July at the Castro. Until this year. To the world it was the 14th Annual SFSFF, but it was my first visit to this well mounted, well curated and exceptionally well attended festival. It won’t be my last. To the rest of the world it may seem like a curious pursuit, but I can think of few pleasures greater than spending a couple of days in the Castro (even without air conditioning) soaking in silent films and live music by some of the best silent accompanists in the world.

Curating a silent film festival takes a special kind of art. Apart from rediscovered and newly restored films, there is none of the urgency of discovery and representation that drives the selection in the rest of the film festival world. And while 80-90% of all silent films have been lost to time and neglect, that still leaves thousands upon thousands of features and shorts available to programmers at any given time. So how do you choose a dozen programs that balance the known and the unknown, masterpieces and curiosities, while suggesting the scope of thirty-some years of silent cinema from all over the world? I don’t know the secret alchemy, but the programmers of SFSFF have found it. The features of this fest are firmly in twenties, the golden age of silent cinema (the exception is the 1932 Wild Rose, from China’s own golden age of silent cinema), with shorts spanning nearly thirties years. The result is not just an appreciation of the greatness of the art across genres and cultures, it is testament to the state of the art of cinema from the mid-twenties to the dawn of sound, and of the Hollywood filmmaking machine where every cog was a professional at the peak of his profession.