Actor, director, and playwright Sacha Guitry was a giant of French cinema as writer, director, and star of a series of witty and inventive movies from the 1930s through the 1950s. For his weirdly exuberant black comedy La Poison (1951) he gives the lead to the great Michel Simon, who plays a gruff bear of a gardener who has come to hate his wife of 30 years and plots her murder while she (Germaine Reuver) plots his. When he hears a radio interview with a lawyer (Jacques Varennes) celebrating his hundredth successful acquittal, he uses the lawyer to (unwittingly) guide him through the perfect murder. Perfection here is a matter of degree, of course. He doesn’t mind being caught. He just wants to remain free to enjoy his life as a merry widower.

Guitry’s cinematic invention is less visual than narrative. He has a flair of creative storytelling and verbal dexterity and most of his films are energized by his presence in the leading role. While Guitry is not the in film itself, he personally introduces the cast and crew like a master of ceremonies in the memorable credit sequence, then steps back and lets his witty dialogue and creative storytelling techniques speak for him. The radio broadcasts commentary and counterpoint to their wordless meals together, for instance, an effusively romantic song as their body language suggests suppressed violent impulses followed by a radio play of bickering spouses voicing their internalized feelings.

I think I would find Borowczyk’s feature films insupportable if they weren’t so much fun. Come to think of it, I did find Goto, île d’amour insupportable: I walked out on it. Having recently seen and greatly enjoyed Blanche (1971), it seems to me in retrospect that all I really needed to enjoy Goto equally well was a cocked eyebrow and a few grains of salt. This guy used to make cartoons after all, right? OK, he made Animated Films Shot Through With Lacerating Black Humor. Yeah, like: cartoons.

END_OF_DOCUMENT_TOKEN_TO_BE_REPLACED

René Clair’s playful take on the Faust legend stirs whimsy into the classic tragedy of a scholar who sells his soul to the devil. As the film opens, the great Michel Simon is the frumpy old Professor Henri Faust, a sheepdog of a scholar disappointed in himself as he prepares to retire without making his mark on the world, and the young and handsome Gérard Philipe is the seductive devil Mephistopheles. But fear not: To prove his power, the devil gives Faust youth and the actors swap roles, with Philipe’s young Faust the rejuvenated romantic discovering everything he’s missed in a life of scholarship and Simon playing the devilish clown as Mephistopheles, scheming to compromise and corrupt Faust at every turn.

You might say that Simon is the whole film. He was a giant of French cinema, and not just because of his big, bearish screen presence. After opening the film as the hangdog Faust, he fires to life as Mephistopheles, tempting the newly youthful Faust with a twisted grin and a gleam in his eye. Simon makes Mephistopheles into a black-hearted trickster behind the manner of a clown, taking pleasure in corrupting what was once a soul dedicated to truth and discovery. As played by Simon, he appears more mischievous than evil, even as he delights in destruction of things and people alike, but in key moments he channels the devil himself, as when he pleads with Satan to grant him power to corrupt Faust once for all. When Clair brings the camera close in for a one-sided conversation with Satan, Simon’s shifting expressions and intensity play across his face like multiple personalities phasing in and out of his body. His performance drives the drama. 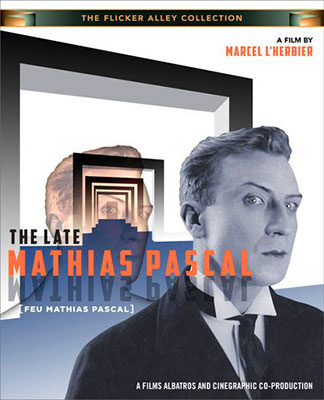 Even the most famous of silent movies are a specialized interest when it comes to home video. Apart from the comedies of Chaplin and Keaton or a few acknowledged landmarks of silent cinema (think Sunrise or Metropolis or Nosferatu), many movie fans view silent films as primitive or dull. Nothing could be farther from the truth. At its best, silent cinema is a pure kind of moviemaking that tells stories in images and metaphor. It’s a different kind of storytelling, but it is no less complex or evocative than the best of sound cinema.

The Late Mathias Pascal, Marcel L’Herbier’s fabulist epic from 1926 France, is a marvelous example of silent cinema at its most ambitious from one of the most inventive and most influential French directors of the era. Based on a novel by Luigi Pirandello, The Late Mathias Pascal (originally titled Feu Mathias Pascal) stars Ivan Mosjoukine, a Russian émigré who became a leading star in French silent cinema, as a dreamer whose life takes a fantastic turn. The film opens with Mathias as the spoiled son of a wealthy widow who loses the family fortune because he, the aspiring artist and would-be genius at work, is too self-involved to be bothered with the family affairs. He’s hardly a classic hero – when asked by his best friend Jerome (Michel Simon), a shy and bumbling but good-hearted working class schlub, to approach the town beauty Romilde (Marcelle Pradot) on his behalf, Mathias ends up falling in love with her himself and ultimately marrying her – but he’s also resilient, plucky, and driven to succeed after his sudden turn of fortune.

Mathias and Romilde move in to a dreary old apartment with Romilde’s sour mother and Mathias takes a job in a horror of a municipal library, yet he approaches both with optimism and ingenuity. When he first enters the former church turned neglected book warehouse, a place that could have spring from the imagination of Kafka in a whimsical mood, he finds rats nibbling the haphazard stacks of books and responds by bringing in a pair of cats. He watches them clear the place with the joy of a kid. But while L’Herbier makes a point of creating a vivid portrait of the social culture of working class life in this small town, realism is the last thing on the director’s mind. The plot takes wildly abrupt turns and shifts in tone–the storybook romance of this marriage is poisoned by his never-satisfied mother-in-law, his optimism is swamped by a double-shot of tragedy, and when his misery sends him on a trip to Rome, fate turns around and suddenly pours on the good fortune. The provincial dreamer who loses it all becomes an innocent in the high society of Rome where he wins it all back, but his new life comes with a wicked price.