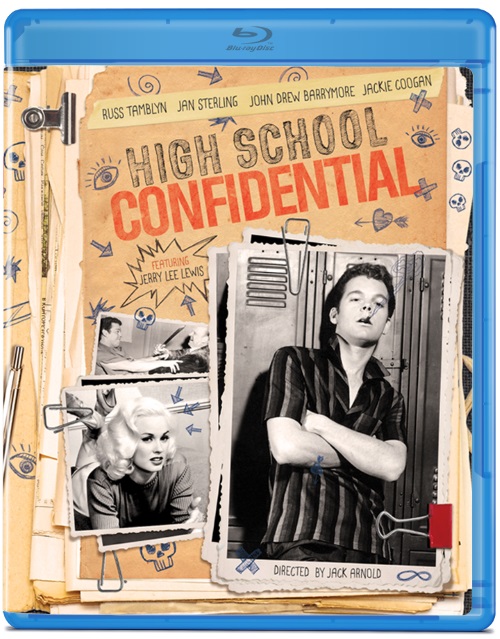 High School Confidential! (Olive, Blu-ray, DVD) – Trashy, tawdry, and weirdly energetic, with tough talking high school delinquents played by college grads spouting mock-beat dialogue, this B+ exploitation classic from producer Albert Zugsmith (who went from Written on the Wind and Touch of Evil to such artifacts as Sex Kittens Go to College and Confessions of an Opium Eater) and director Jack Arnold is a terrifically entertaining piece of drug scare cinema. Russ Tamblyn blows into school in a hot rod convertible, all smart aleck attitude and high-rolling hoodlum ambition, and muscles his way into the local drug scene, but this hep-talking cat is actually an undercover agent, the original 21 Jump Street–style baby-faced narc working his way up to the local drug lord known as Mr. A.

It’s a thoroughly bizarro collision of teens-gone-wild hysteria and drug scare edutainment (“If you start on the weed, you graduate to the hard stuff”), with beatnik dialogue (“I’m puttin’ it down” / “Well I’m pickin’ it up!”), clueless parents, and stiff authority figures delivering the “truth” about drugs in the high schools in scenes that grind the movie to a halt for moralizing sermons. It opens with Jerry Lee Lewis pounding out the rocking theme song on a piano in the back of a pickup (which then drives off, never to be seen again), co-stars Mamie Van Doren as a sloshed slutty suburban housewife who is supposed to be Tamblyn’s aunt but keeps trying to seduce him, and features John Drew Barrymore (Drew’s dad) as the drawling high school kingpin who delivers the story of Columbus as a piece of beat performance art, which is merely prelude to a full-blown beat poetry recitation. Jan Sterling plays the “cool” teacher determined to really understand youth today that she lets her students get away with utterly disrespectful behavior, button-nose cutie Diane Jergens is Barrymore’s weed-head kitten, Michael Landon the clean-cut big man on campus who isn’t as square as he looks, and Jackie Coogan the coffee-house owner with a sideline in mary-jane and heroine.

Jack Arnold is best known for bringing intelligence to fifties science fiction cinema (It Came From Outer Space, The Incredible Shrinking Man) but actually had quite a range, making everything from westerns to comedies. He has an eye for staging and a great sense of timing, not to mention a way with making overdone performances fit into the same movie universe, and he embraces the outré elements with such energy that they take on a life of their own. It’s camp, to be sure, but great fun as a crazy take on adult fears of high school delinquency and Arnold’s commitment to this ridiculous portrait of teenage life and corruption in suburbia pulls it all together in a crazy warped mirror that has a life all its own. “Tomorrow is a drag, man, tomorrow is a king-size bust.”

This is a CinemaScope production and the only previous legitimate DVD release was non-anamorphic. It’s been remastered in HD for the Blu-ray debut and new DVD release, which alone makes it a necessary upgrade. It’s not perfect, mind you, and there’s a brief rough patch with major scuffs and scratches and damage that sends the picture shaking for a second or two, but it offers a sharp image and a clean soundtrack. No supplements.