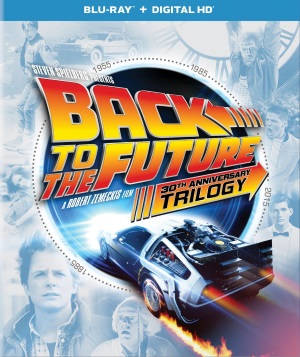 Back to the Future: 30th Anniversary Trilogy (Universal, Blu-ray, Blu-ray 3D, DVD) – “The future is whatever you make it, so make it a good one.”

October 21, 2015, is a date foretold… in Back to the Future II! That’s right, it’s not just the 30th anniversary of the original Back to the Future, it’s the day that Marty travels to in the second installment of the time-traveling trilogy.

Of course there’s a new 30th Anniversary special edition trilogy edition on Blu-ray and DVD to mark the occasion, and for the entire month of October, Amazon Prime members can stream all three films as part of their subscription.

Michael J. Fox goes backwards, forwards, and sideways through time as Marty McFly in a souped-up DeLorean for the first time in Back to the Future (1985), where he jaunts back to 1955, meets his parents (Crispin Glover and Lea Thompson), and finds a younger (but just as crazy) Doc Brown (Christopher Lloyd), the genius inventor who builds the time travel device and has to concoct a way to get Marty back to 1985. The film’s hopped-up energy, action movie slapstick and tongue-in-cheek cheek social commentary spoofing helped turn it into a blockbuster hit and a pop-culture sensation so director Robert Zemeckis and co-writer / producer Bob Gale came back with two sequels.