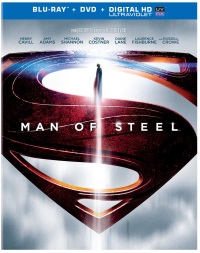 Man of Steel (Warner, Blu-ray, Blu-ray 3D, DVD) is not a remake of Richard Donner’s Superman films but the inspiration there. Zach Snyder directs this retelling of the origin story, scripted by comic book movie-veteran David S. Goyer, with sturdy, stalwart, and somewhat inexpressive British actor Henry Caville as the adult Superman. The Krypton origin (with Russell Crowe playing his father, Jor-El, sending his baby into space as his planet blows up) and Earth childhood (Kevin Costner and Diane Lane play his loving and protective human parents) is here, as is a city-destroying fight with Krypton patriot Zod (Michael Shannon in this version), the villain of Superman 2. That destruction was singled out for being very un-Superman-like (wouldn’t the red and blue boy scout try to lure Zod someplace a little more remote?) and they have a point. This isn’t The Avengers protecting a city and its people from alien invasion. It’s personal, or at least Snyder tries to make it so, since the rest of the film is a somewhat portentous story of self-discovery by a (super)man who discovers he’s not of this earth but an orphan from space with power greater than any mortal man. With great power comes great responsibility, after all. Wait, that was the other guy, wasn’t it?

Another line from a superhero picture, this one a fellow DC Comics revival, springs to mind: “Why so serious?” There’s nothing wrong with taking a serious approach to the superhero genre – it worked for Batman and The X-Men – but Snyder’s solemnity tends to smother the experience. He give us big spectacle and epic damage in a dour world, draining the screen of bright colors and shooting with that ubiquitous shaky-cam, as if that makes everything seem like a news story in an alternate reality (enough with the exaggerated handheld camerawork already!). 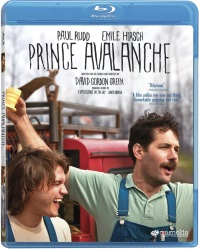 David Gordon Green gets back to the basics with Prince Avalanche (Magnolia, Blu-ray, DVD), a modest, warm-hearted tale of two guys on a rural road crew, painting traffic lines and pounding in roadside posts on winding forest roads in 1988 Central Texas. Paul Rudd is the senior partner in this odd couple, embracing the solitude and peace of the job while professing his commitment to the girl he left behind, and Emile Hirsch is the little brother of his lady love, hired on as a favor even though the boy would rather be partying in the city. It’s a year after forest fires tore through the area and there’s a quality of ghost story to the film, a sense of loss and disconnection that extends to the relationships that get talked about instead of lived.