Listed in the Cannes festival catalog as “Untitled” and shown via a print lacking its final sound mix, Wong Kar-wai’s new picture is both more of the same and a tentative step in a new direction. Although the Hong Kong director continues his fruitful partnership with first-rate, Australian-born cinematographer Christopher Doyle, and although In the Mood for Love is often gorgeously framed, lit, and color designed, there’s virtually none of the swoopy/slithery camera moves that frequently outran purpose and sense in Chungking Express, Fallen Angels, and Happy Together. Instead the visuals respect the discretion and emotional delicacy of the two principal characters, nextdoor neighbors (Maggie Cheung, Tony Leung Chiu-wai) who gradually realize that their respective spouses are having an affair. Mutual pain draws them together, after a fashion (the spouses themselves are scarcely seen and remain faceless even then). But this being the hyperromantic yet inveterately lonely world of Wong Kar-wai, we should know not to count on the fulfillment that the wall-to-wall Nat “King” Cole song track yearns for.

END_OF_DOCUMENT_TOKEN_TO_BE_REPLACED

There may be no more sensual director in the world today than Hong Kong’s Wong Kar-wai.

His best films (Chungking Express, Ashes of Time) are rich in unconsummated affairs. The delicate shadow dances of would-be lovers and flirtatious courtships of couples that only fleetingly make contact are like a postmodern vision of a 1940s Hollywood melodrama shot in splintered glimpses and burning color.

END_OF_DOCUMENT_TOKEN_TO_BE_REPLACED

Hong Kong was the Hollywood of East Asia through the sixties and seventies, cranking out romances, melodramas, costume pictures, and especially martial arts action films. In the 1980s, the familiar style got an adrenaline boost when Tsui Hark returned from American film school with new ideas on moviemaking, and other young directors eager to make their mark in the movies. But where directors like John Woo (The Killers), Corey Yuen (Saviour of the Soul), and Ringo Lam (Full Contact) were reinventing action movies and big screen spectacle with whooshing camerawork, dynamic editing, and action exploding all over the frame, Wong Kar-wai was casting the stars of those films in more intimate and impressionistic films. His debut film As Tears Go By (1988) turned the “heroic bloodshed” genre of Triad gangster movies into a young adult melodrama. Days of Being Wild (1990), his second feature and his first collaboration with his signature cinematographer Christopher Doyle, was Wong’s first masterpiece. 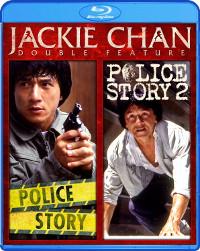 In the Hong Kong action movie explosion of the eighties, when the craziest, most kinetically energetic and narratively surreal action movies were pouring out of the Hong Kong studios at a breakneck pace, Jackie Chan’s Police Story (1985) was one of the films that both defined and redefined the industry while firmly establishing Jackie Chan as a worldwide superstar. Everywhere except the U.S.

Chan had been making successful films for years but this was something different. In Hong Kong, he was moving into modern action comedy in Wheels on Meals and adding color, different cultural backdrops, and more spectacular stunts to the martial arts fight movie with Project A (all with his opera school buddies and fellow stars Sammo Hung and Yuen Biao). But Chan had chafed at the way American productions tried to fit him into a generic mold in his bid for a U.S. crossover film, The Protector. He came back to Hong Kong with lessons learned.

Police Story was his answer to the American action blockbuster and the first of his aggressive appropriations of American hit movies remade as Jackie Chan spectacles. It was modern and urban, filled with gritty action and juvenile slapstick, and it incorporated Jackie’s brand of acrobatic martial arts (with all its comic flourishes) with big budget set pieces and eye-popping stunts. He lavished production value on the film. The story is almost inconsequential, something to do with a case against a mob boss and his drug operation. Ka Kui Chan, a committed officer on the elite CID division of the Hong Kong Police, is assigned to “protect” a reluctant witness (the great Brigitte Lin) and then framed by the mob as a corrupt cop, sending him on the run to clear his name and take out the gang one man at a time.

The only logic is kinetic: one action follows another with ingenuity and physical integrity. It opens on mission gone wrong that turns into a car chase through a hillside shantytown reduced to rubble by the careening vehicles smashing through huts and blowing out walls as inhabitants scurry for cover, and it ends with a brutal one man battle with a criminal army in the six-story atrium mall that sends combatants through plate glass windows, down escalators, and over railings. In between is a satire of office politics, a slapstick romance between a smug, chauvinistic Chan and his fresh-faced girlfriend May (a very young Maggie Cheung) — an innocent who gets almost unbearably knocked about for laughs — and an almost non-stop mix of acrobatic set-pieces, physical comedy, and fast and furious fight scenes. It’s the whole raison d’etre for the film and Jackie walks a fine line through the action, which is both potentially deadly and yet much of it played for humor. The cleverness and the comic potential blunt the brutality of the battle.

As a director and a savvy manager of his brand, Chan knew what audiences wanted and he delivered in spades. Like his American heroes, Buster Keaton and Charlie Chaplin, he presented his most elaborate and daring fights and stunts in long, unbroken takes, the better to show his fans that he did at all, with no stunt doubles or cheating shots. And then he showed it again, and again, from other angles, to give everyone their money’s worth. And just to prove his credentials, he plays it all again in a closing credits montage, with clips interspersed with behind-the-scenes footage and outtakes from stunts gone wrong.