There are a couple dozen lines of dialogue in Arctic, plus an assortment of grunts. As it happens, we don’t need even that much spoken information: The simplicity of writer/director Joe Penna’s approach and the magnificence of Mads Mikkelsen’s acting is more than enough to make this survival tale a gripping experience.

One of Penna’s best decisions was to lop off the first act of the story. We don’t know how or why a man, played by Mikkelsen (the superb Danish actor from Casino Royale and the TV version of Hannibal), has come to be stranded somewhere in the frozen North.

In Dogme director Kristian Levring’s harrowing 2000 film The King Is Alive, a clutch of mismatched folk variously afflicted by modern-day angst are stranded in the great void of an African desert. For distraction, they decide to perform King Lear, Shakespeare’s wrenching tale of despair and madness. For these lost souls, it’s the narrative containment of the play’s spiritually corrosive content that looks like something they might hold on to.

The Salvation, Levring’s strangely numinous Danish take on the American western, displays a similar faith in the power of fiction, to show and contain chaos and horror, ceremonially, artfully. That power in some fashion saves us—like the ritual of consuming a god’s blood and body. The ambiguous salvation promised in the movie’s title may well refer to the good work art can do for us.

END_OF_DOCUMENT_TOKEN_TO_BE_REPLACED

As a Western shot by a Danish crew in South Africa, The Salvation already has a hodgepodge air about it. The movie never quite overcomes that sense of being assembled from different directions, but—with the help of two charismatic stars—it does conjure up its share of evocative genre moments. The hook is set early, as a terrible act of frontier violence and instant retribution blows apart the world of Danish immigrant Jon (Mads Mikkelsen). Now Jon and his brother Peter (cool customer Mikael Peresbrandt, a Hobbit veteran) are targeted for revenge by a very bad hombre (Jeffrey Dean Morgan) whose henchmen have the usual traits of bad hygiene and lousy marksmanship. There’s also a woman, played by the thankfully ubiquitous Eva Green, who does not speak. A wordless role is no problem for this French actress, who looks as though she might set fire to the entire worthless town with a glance. 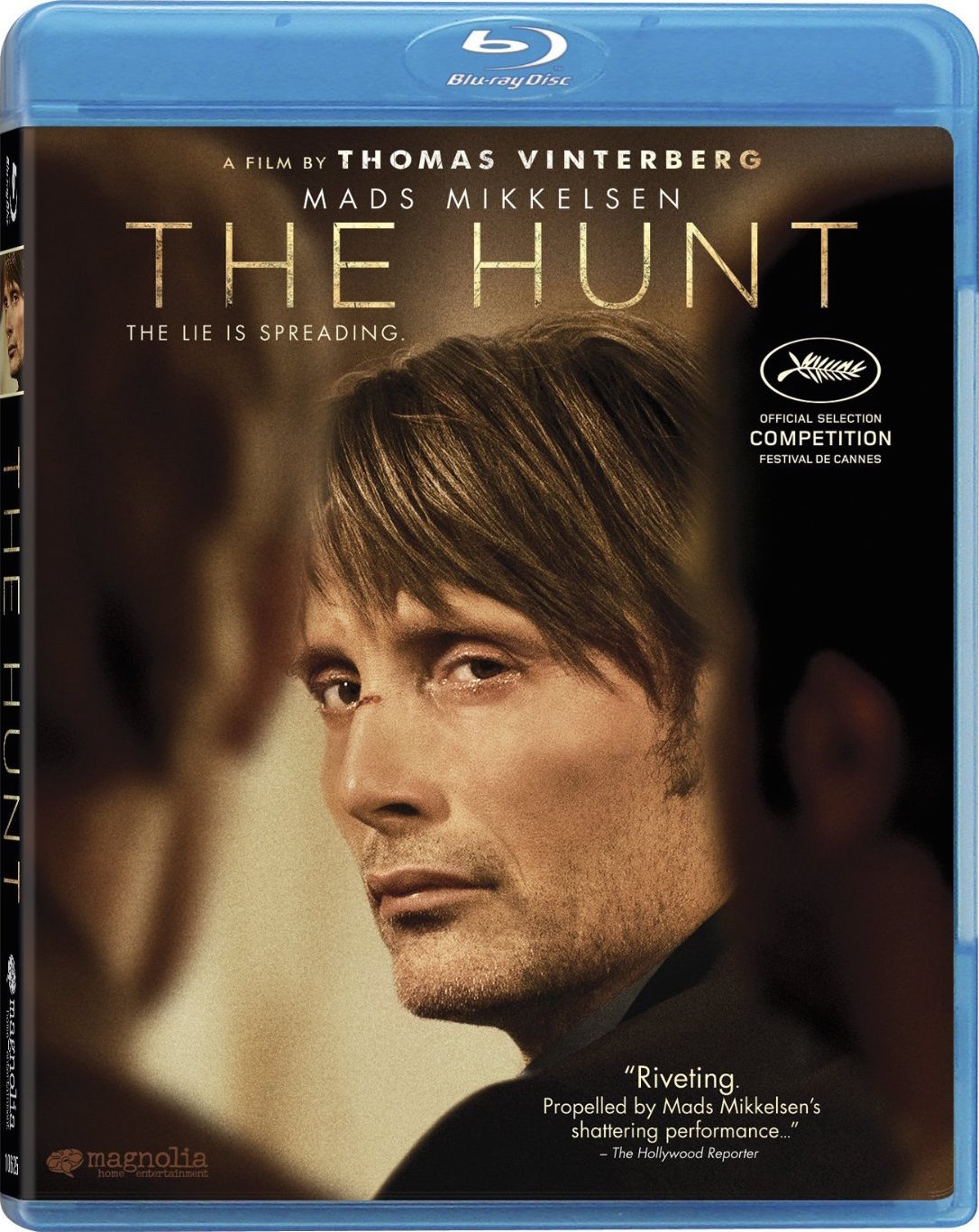 Thomas Vinterberg not only spearheaded the Dogme 95 movement with Lars von Trier, he made people pay attention to it with his 1998 feature The Celebration (aka Festen), a searing family drama of raw emotion, primal rage, and healing solidarity strewn with dark humor and discomforting situations. The Hunt is not bound to the self-imposed restrictions of the Dogme movement but otherwise it returns to the same intensity of volatile emotions and social transgressions. It’s uncompromising and uncomfortable, a film that had me knotted up in anxiety yet unable to turn away, and it’s Vinterberg’s best film since The Celebration.

Mads Mikkelsen stars as Lucas, a dedicated teaching assistant at a pre-school in a small town in Denmark, and Annika Wedderkopp is Klara, the pre-school-age girl who adores this gentle man, a family friend whose warm presence is an escape from the tension at home. In a moment of childish pique after he admonishes her for kissing him on the lips (“That’s reserved for Mom and Dad,” he insists), she spits out some angry comments mixed with sexually-suggestive phrases overheard from her brother and his porn-obsessed buddies. She clearly has no idea what these words actually mean and there is no malicious intent, merely a child blowing off steam, but the ambiguous comments quite rightly lead to an investigation of possible child sexual abuse.

Mads Mikkelsen plays a serial killer on TV’s Hannibal, but in Thomas Vinterberg’s study of rumors and self-righteous hysteria in a Danish village, he’s a compassionate preschool teacher who falls under wrongful suspicion of child sexual abuse. Adorable little Klara (Annika Wedderkopp) lives under a cloud of anxiety at home, where the verbal scuffles of a troubled marriage makes her shrink in dread. Mikkelsen’s Lucas, a trusted friend of the family, is the most stable and comforting adult in her life, and she clings to him like a lifeline.

When Klara pours out a confused but alarming string of inappropriate phrases she heard spoken by teenage boys, mixed with misguided anger toward Lucas, alarm bells go off. The police investigation is leaked to the public before it’s even begun, then suspicion about Lucas spreads like a virus through the community. Everyone assumes he’s guilty.

Vinterberg works in the same key of personal transgression and raw, inchoate emotion that made his 1998 The Celebration so effective.

Director Nikolaj Arcel and writer Rasmus Heisterberg (The King’s Game, the Swedish The Girl With the Dragon Tattoo, et al.) again join forces to mount a handsome period piece about hot times in the 18th-century court of Denmark. Such a revolutionary era, plus a scandal that rocked all of Europe, should have fueled A Royal Affair with high-octane dramatic juice: oversize personalities, royal adultery, intellectual ferment, dynastic intrigue. But Affair is disappointingly conventional, much too decorous and, at two hours-plus, sometimes just plain dull. Narrated in voice-over from some date in a tragic future, the story’s robbed of immediacy and color.

Worse, the lack of any directorial point of view makes it an even more tepid Affair. There are many ways to come at historical melodrama, from the hipster revisionism of Sofia Coppola (Marie Antoinette) to the voluptuously stylized sado-masochism of Josef Von Sternberg (The Scarlet Empress). Arcel, Heisterberg and lenser Rasmus Videbaek bring little that’s exciting or notably enlightening to the way they frame these volatile times and characters.

Fifteen-year-old Caroline Mathilde, sister of a future king of England (pretty Alicia Vikander, also appearing in Anna Karenina), arrives in Denmark in 1766 resolved to be a good and dutiful wife to young Christian VII (Mikkel Boe Folsgaard). Unfortunately, hubby’s an unstable, debauched boor given to giggling maniacally and insulting his talented teen wife publicly. After Caroline manages to birth an heir, she bars the royal spouse from her bed.