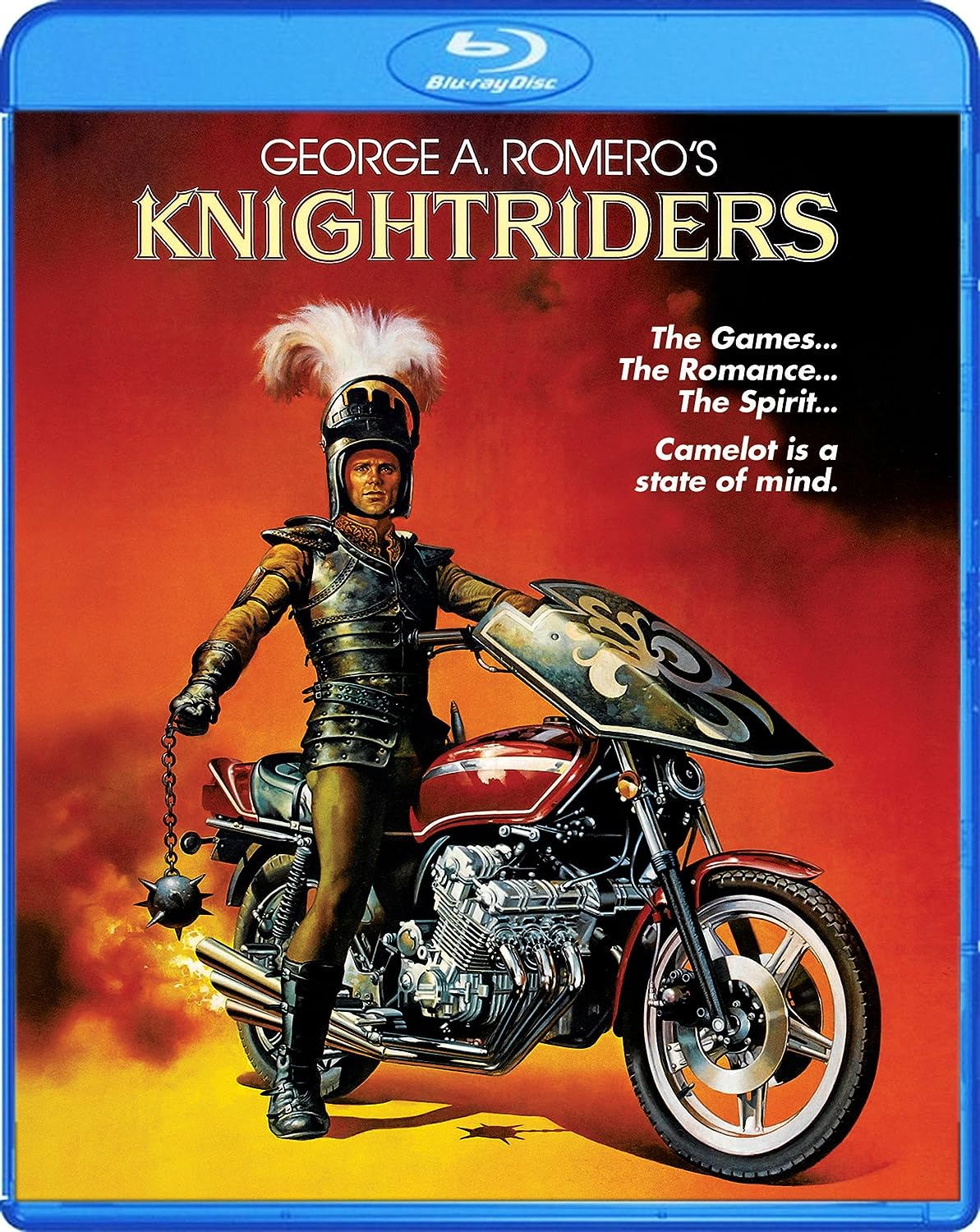 Three years after the success of Dawn of the Dead, George Romero stepped out of his defining genre to direct something more unexpected. Based solely on the film’s original poster, painted by famed fantasy illustrator Boris Vallejo and featuring Ed Harris striding a motorcycle in medieval armor, handlebars in one hand and a spiked flail in the other, you might expect Knightriders to fall in line with the Roger Corman drive-in genre of futuristic barbarian movies, an upscale Deathsport with a middle-ages theme.

Romero’s film couldn’t be farther from it. Knightriders does indeed offer riders in suits of armor over tunics and tights, jousting on motorcycles and battling with swords, maces, ornate axes and other ancient weapons, but it’s part of the spectacle they provide for local audiences with their traveling Renaissance Fair. To the crowds it’s just a show but for this community of cycle-riding gypsies and old-school artisans and craftsmen, it’s a good-natured competition undertaken in the spirit of their Arthurian inspiration.

The screenplay echoes the King Arthur legend but stops short of attempting to recreate it in literal form. Ed Harris took his first leading role as Billy, the benevolent king of the troupe and an idealist who aspires to the chivalric code in the modern world. He created this scruffy nomadic community and struggles to hold on to his singular vision as the troupe grows. The supportive Merlin (Brother Blue) is the troupe’s medical doctor, a man who dropped out of the traditional medical culture to be a healer, shaman, storyteller, and Billy’s most trusted advisor. You can pick out a Guinevere in his Queen Linet (Amy Ingersoll) and a Lancelot in the loyal Alan (Gary Lahti), the heroic and handsome right-hand to Billy, but there is no betrayal of vows between them. There’s a Percival in the silent Native American local (Albert Amerson) who challenges Billy during an exhibition and then becomes his devoted shadow and protector. There is even a fall of their Camelot in the form of the temptation of money and fame, which draws out a faction of riders led by Morgan (Tom Savini), the resident black knight who undertakes every competition with a little more competitive aggression and physical gusto than most. 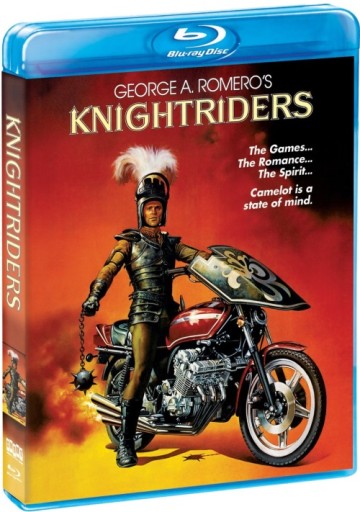 Knightriders (Shout Factory, Blu-ray) is easily the gentlest film ever made by George Romero, a romantic story of gypsy bikers who create a kind of traveling Renaissance faire built around the chivalric ideal of an Arthurian court. There’s a streak of the Camelot story played out all in modern times, but on a more intimate, human scale which Romero uses explore the dynamics of idealists in the real world who play-act their fantasies in a communal setting. Ed Harris took his first leading role as Billy, the benevolent king of the troupe and the man who created this scruffy nomadic community and struggle to hold on to his singular vision as the troupe grows. He’s a moral rock but also unbending and at times fanatical in his devotion to the code, which takes its toll on the individuals who joined this collective ideal for reasons of their own.

Tom Savini, Romero’s special effects artist and a memorable biker co-star of Dawn of the Dead, is quite striking as the charismatic “dark knight” Morgan, who has no investment in the Arthurian ideal but likes the spirit of competition and the charge of jousting on cycles, and Brother Blue is the troupe’s Merlin, a medical doctor dropout turned shaman and storyteller, but the entire cast meshes in the most naturalistic ensemble of Romero’s career. He’s so devoted to their stories that he lets the film run on the long side and fudged some of the practical details and decisions for the sake of dramatic moments, but he’s committed to keeping their shows firmly in the world of permits and insurance and first aid tents and making accommodations to modern society a matter of degree where opinions differ. The stunt work is excellent but down to earth, executed with a mix of circus showmanship and gearhead sportsmanship. Getting rough is part of the deal, but it’s all in fun.

For all the medieval throwback of clashing swords, suits of armor and knights on motorbikes, Knightriders isn’t a fantasy. It’s a modern film about the difficulties of sustaining an idealistic alternative to the material world, sixties values meeting human nature, and Romero views it with optimism. The folks that this band attracts are not all of one mind, but they are ultimately bound by a sense of community and commitment to an ideal. 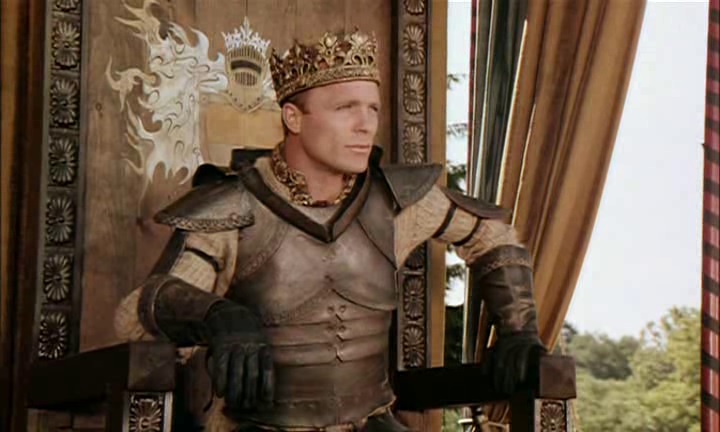 The Blu-ray debut is mastered with vivid color (it brings out the rich greens of the forest scenes that set the idyllic tone of the film) and a clean image with only minor signs of wear. It looks great and features the commentary track recorded by director George Romero, actors Tom Savini, John Amplas, and Christine Romero, and film historian Chris Stavrakis for the Anchor Bay DVD release over a decade ago plus vintage video footage of the motorcycle stunt riding. Exclusive to the disc are three new interviews with Romero, Savini and Ed Harris, who has nothing but good memories of the film and pride for his performance. 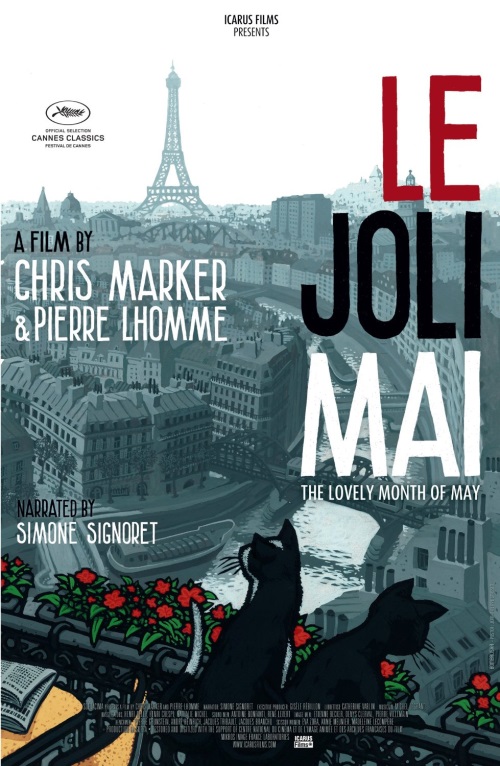 Documentarian Chris Marker and cinematographer Pierre Lhomme shot Le Joli Mai (Icarus, DVD, VOD), a portrait of Paris conducted through random interviews with ordinary citizens and minor celebrities on the streets in May, 1962, just after the cease-fire that ended the war in Algiers. With a portable handheld camera, they take an informal survey of what’s on the minds of a cross-section of Paris inhabitants while the film segues into more political territory for the final section. An early piece of direct cinema from an idiosyncratic filmmaker (Marker made this non-fiction epic concurrently with his experimental science-fiction short La Jetee), it’s quite a snapshot of a place and time and it comes to DVD after a new restoration and revival brought it back to American cinemas after fifty years. Simone Signoret narrates the English language version, but this edition also includes the original French soundtrack, with narration by Yves Montand. Both feature English subtitles. Check out Glenn Erickson’s review for more detail.