I still marvel at how the Vancouver International Film Festival seems to be one of the best-kept secrets on the West Coast. Opening a few weeks after Toronto, it is almost concurrent with the New York Film Festival, which makes headlines with the official American premieres of some of the season’s most anticipated films. Many of those very same films are screening across the country in Vancouver, often a day or two before NYFF, and it is a mere 2 ½ hours away from my Seattle domicile. It’s one of the quirks of the festival circuit: the films that made their respective North American premieres in Toronto (after a possible “unofficial” screening at Telluride) vie for a spot at NYFF, where it gets the media spotlight, while Vancouver quietly slips somewhere around half of those into their line-up.

Here are a few titles snagged by VIFF this year: Maren Ade’s Toni Erdmann, Pedro Almodóvar’s Julieta, Olivier Assayas’s Personal Shopper, Jean-Pierre and Luc Dardenne’s The Unknown Girl, Hong Sang-soo’s Yourself and Yours, Jim Jarmusch’s Paterson, Barry Jenkins’s Moonlight, Pablo Larraín’s Neruda, Ken Loach’s I, Daniel Blake, Cristian Mungiu’s Graduation, Cristi Puiu’s Sieranevada, Albert Serra’s The Death of Louis XIV, Paul Verhoeven’s Elle…. There are other films playing both fests, and plenty of films screening at Vancouver that are nowhere to be seen on the NYFF schedule, but that should give you a taste of a few of the delights that Vancouver offers over 16 days and eight venues (seven of them within walking distance of one another). It’s why I go every year that I am able.

END_OF_DOCUMENT_TOKEN_TO_BE_REPLACED

As political filmmakers go, Ken Loach makes the admirably committed John Sayles look like a tenderfoot. Now in his sixth decade of filmmaking, the British director shows no signs of softening his stance, even amid recent rumors of a possible retirement. A dedicated social-concern standard-bearer in his films and a strident activist in his life, Loach is capable of balancing his passions when he’s on his game (see My Name Is Joe and Sweet Sixteen, for instance). When he’s not, his films can get talky and obvious—and alas, Jimmy’s Hall finds Loach working with stilted material.

Loach and his frequent screenwriter Paul Laverty return to Ireland, the setting for their beautiful The Wind That Shakes the Barley (2006).

Ken Loach, that old British leftie director, keeps up his commitment to the poor and disenfranchised with The Angels’ Share, his latest collaboration with equally socially conscious screenwriter Paul Laverty. It’s set in the familiar Loach environs of troubled youth, the unemployed, and the eternal underclass—here specifically the slums of Glasgow. But after the political dramas Route Irish and The Wind That Shakes the Barley, Loach instead builds an underdog, offbeat comedy on the scruffy camaraderie of some two-time losers. He directs it with warmth and affection.

Robbie (Paul Brannigan) has his past carved into his face like a road map. He’s got a prison record, a history of violence, and a short temper. But now he’s also a young father desperate for a fresh start, even while admitting he’s “stuck in the same old shite”—at least until his community-service supervisor (John Henshaw) introduces him to the venerable Scottish tradition of distilling whisky. Then Robbie discovers he has a nose and a knack for fine spirits. 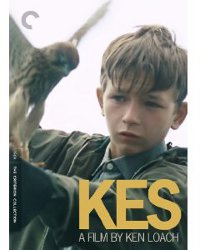 The story of a boy and his bird, Kes is something of a small cinematic treasure in Britain.

Set and shot in the North of England and cast overwhelming with non-professional locals from the area, it cast its lens on the dreary life and hopeless future of a scrawny, fatherless teenager, Billy Casper (David Bradley), grinding out his last days in a miserable public school where discipline and regimentation trumps education and encouragement. Bored and bullied (by students, teachers and his bitter older brother), this curious, restless boy is inspired to capture and train a young kestrel that he captures from a nest in a nearby ruin, all that’s left from a medieval castle in a nearby field, and the film soars with Billy’s joy and exhilaration as he trains and exercises the young kestrel.

Though considered uncommercial by British distributors, it was a surprise hit embraced by the public when it was finally released in 1970 and, more recently, it was voted as one of the ten greatest British films of all time in a poll conducted by the BFI.

Kes is second theatrical feature by director Ken Loach, who came out of British television as a socially and politically committed filmmaker who now as then focuses his lens on the poor, the working class and the disenfranchised. In this film, based on the novel “A Kestrel For A Knave” by Barry Hines, he immerses us in the culture of a coal town where the kids have little hope of escape. Billy swears that he will not go “into the pits” like his brother but he has no illusions that he’ll end up in some dead end job he hates. Yet for all the misery around Billy, from his chilly home and the bed he shares with his bullying older brother to the tyrant of a principal who gives out corporal punishments like its part of the daily schedule, and the often impenetrable Yorkshire accents and dialects of the soundtrack, Kes is a lovely and touching film. Loach appreciates the cheeky wit and energy of its scruffy, scrappy hero and, in a classroom scene where he’s roused to tell this classmates about training the bird, he brings Billy  to life with an outpouring of excitement and love.