Sabu! (Eclipse Series 30) (Criterion) presents three Alexander Korda productions (all directed by his brother, Zoltan Korda) starring Selar Shaik, renamed Sabu when was elevated from boy elephant driver of a maharaja to star of the film Elephant Boy (1937). It was perfect casting — the 12-year-old Sabu (who learned his lines  phonetically) rides and clambers over the full-sized elephant with such ease that you never think of him as an actor — but it’s the boy’s exotic beauty, authentic sincerity and unselfconscious screen charisma that brings the character alive.

Robert Flaherty, the great pioneering documentary filmmaker, shares directing credit. He shot the great wildlife photography of the film, notably the majestic herds of elephants marching through the jungles and wading across the rivers, while Korda handled the dramatic scenes in the studio (Sabu was flown to London for these scenes, his first trip out of India). But it also has its share of Hail Britannia colonialism, as Sabu’s Toomai uses his skills with the elephants to deliver the herds to the British, becoming essentially a prized scout for the occupying powers. There’s no irony here — the Hungarian born Alexander Korda embraced his British citizenship with a passion and celebrated its empire and its history in almost all of his films.

Sabu became a star and was immediately cast in The Drum (1938), another drama of British colonial power in India with Sabu as a young prince targeted by a power-hungry uncle (Raymond Massey in brownface) and protected by a kindly British officer (Roger Livesey) and his wife (Valerie Hobson). Sabu’s energy and enthusiasm dominates the adventure, which was photographed in color by the great Georges Perinal, even as he idolizes the military grandeur of the British army and teams up with them to fight his uncle, a man amassing power to drive the British out of India. 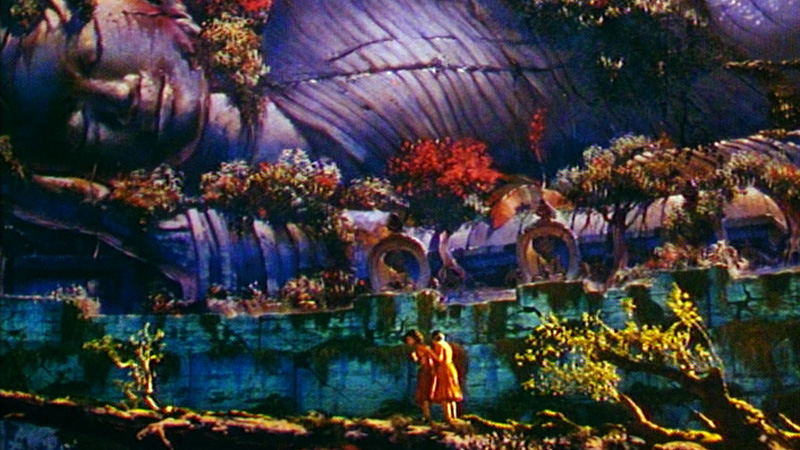 Jungle Book (1942), considered by many to be the definitive version of Rudyard Kipling’s stories, is the highlight of the set, a glorious Technicolor jungle fantasy with Sabu, now a young man, a confident movie star and an acrobat of actor, as the grown jungle orphan Mowgli. Adopted by a childless couple when he’s captured visiting a village at the edge of his jungle home (he’s captivated by the fires in the village), he’s a wild boy they attempt to tame while the greed and prejudice of a few villagers shows him that society is no more civilized and a great deal more duplicitous than the law of the jungle. Joseph Calleia is the worst of the human villains, driven by avarice to murder for the lost treasure the Mowgli has found in the heart of the jungle.

Framed by a storyteller entertaining his audience the grand adventures of Mowgli and the jungle animals, it has a quality not of storybook but of folk tales come  to life. The production uses real animals (and majestic specimens at that) for the most part as the jungle characters while California forests and Hollywood sets to double for Indian jungles and ancient ruins. It’s a visual delight with grand imagery and adventure and Sabu swings on vines and talks to the animals (both friend and foe) like Korda’s exotic young answer to Tarzan with more articulation. And there’s none of that colonial idealization of British values and western occupation. This is just pure storytelling joy.

For the completist, Sabu made “The Thief of Bagdad” for Korda between “The Drum” and “Jungle Book,” which is available separately from Criterion. No supplements on this Eclipse set apart from film notes by Criterion’s house film historian Michael Koresky. You can read his essays at the Criterion Current here.