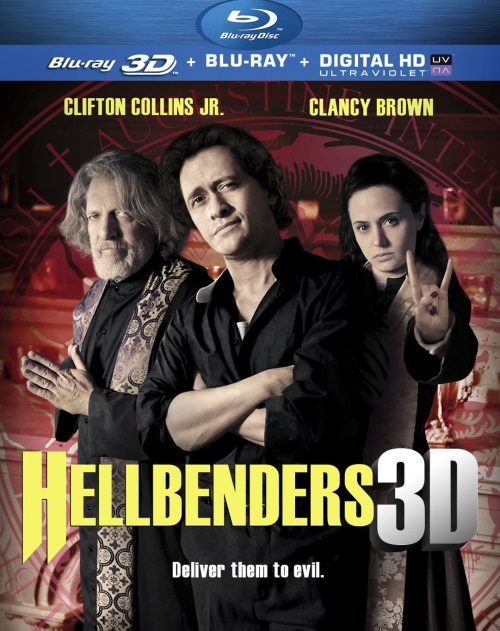 Hellbenders (Lionsgate, Blu-ray, Blu-ray 3D, DVD, Digital HD) – It’s an unusually thin week for New Releases on disc, so I took the opportunity to grab something that might ordinarily get overlooked. I’ve been a fan of JT Petty since he made Soft for Digging more than a decade ago. He’s got a gift for unease and eeriness and prefers weird and creepy over explicit when it comes to his horror.

For Hellbenders, however, he takes a page out of John Carpenter’s Vampires (with a touch of Alex de la Iglesias’ The Day of the Beast) for his wild bunch of holy demon hunters. Clancy Brown leads the multi-denominational dirty half-dozen, a band of badass kamikaze exorcists who behave more like a motorcycle gang than ordained priests. Even their name sounds like a gang: The Augustine Interfaith Order of Hellbound Saints. Petty’s twist is that these holy warriors have a poison pill back-up: if they fail to exorcize their target demon, they can coax the demon into possessing them (a man or woman of God is a prize for Satan’s spawn) and then kill themselves and drag the demon with them back down to hell. Which means they have to be “damnation ready” by breaking a healthy percentage of the 10 Commandments and indulging in the Seven Deadly Sins—within boundaries, of course.

Great idea for a horror comedy but misguided in the execution. Petty isn’t—how shall I put this—funny. His previous films have spun webs of unease with his eerie imagery and offbeat horrors and controlled, underplayed performances. Hellbenders tries to leverage to contradictions inherent in the premise for laughs without actually giving his naughty priests anything clever to do. A bunch of debauched guys (including Clifton Collins Jr., The Wire‘s Andre Royo and an underutilized Dan Fogler) and one woman (Robyn Rikoon) in clerical collars blaspheming a blue streak, smoking dope and discussing sexual indiscretions does not a joke make, and his script doesn’t even offer anything as clever as a tired Bruce Willis quip lobbed under fire.

As meticulous as his best films have been, Hellbenders feels as starved of creative attention as it is of budgetary resources. The direction feels haphazard, the characters lazily dumped into scenes where they try to shout their way out of the material, the demon battles staged with perfunctory fire and brimstone but little sense of anything actually at stake (let alone a genuine hell behind the threat). If you think it’s worth it just to hear Clancy Brown commit himself to a stream of expletives with gusto for near-on 90 minutes, I won’t judge you. But it’s hard to believe such talented people made such a lifeless, laughless black comedy decades after Sam Raimi reset the bar with the Evil Dead films.

Blu-ray and DVD editions include commentary by Petty and the cast and the 26-minute “God’s Dirty Work: The Making of Hellbenders” produced by Red Shirt Pictures (which has been doing fine work for Shout Factory’s special editions), plus behind-the-scenes footage and the original “Exorcism” short films (glimpsed in the mock-documentary framing footage). The Blu-ray edition features the 3D version of the film for 3D-compatible monitors and players and an UltraViolet Digital HD copy.

Peter Bogdanovich had wanted to make Nickelodeon in black-and-white, as he had The Last Picture Show and Paper Moon (“In color it feels made up,” he explains, “In black and white it seems more real”), but coming to the project after a pair of flops (Daisy Miller and At Long Last Love), the studios weren’t very accommodating. So he turned to retrospective reconstruction to desaturate the color and create a black-and-white version for this “Director’s Cut”-branded revision. END_OF_DOCUMENT_TOKEN_TO_BE_REPLACED

JT Petty’s third feature The Burrowers is another of his distinctively unusual takes on a generally conventional genre. Set in the Dakota Territory of 1879, where survival is already a challenge, Petty brings a starkly unglamorized sensibility to life and mortality on the Dakota prairie: it opens with a boy come a courting to a farmgirl only to discover a massacre and what appears to be the abduction of the girl. Clancy Brown and William Mapother, who have faces that look like they’ve survived tough times, are perfect as the leaders in a hunting party after a kidnapped girl: confident but unpretentious and very respectful of the country. But they think they’re tracking an Indian raiding party. What they find are fetid holes in the prairie ground filled with bone and blood and sinew, as if a body has been digested by the Earth. Which is close to the truth. Petty plays the unforgiving tensions between the settlers and the native tribes with palpable animosity, the distrust so great that their fragile truce snaps before they even take on the burrowers, the underground creatures that have been hunting on the prairie. He keeps the threat visually vague and the insect-like burrowers shadowy and smudged, creating his horror out of mystery and suggestion, but it’s nothing supernatural or alien. It’s a real western/horror/monster movie with a devoted frontier sensibility and loving nods to The Searchers.

The film debuted at the Toronto International Film Festival and toured various festivals dedicated to films of the fantastic but was otherwise released direct to DVD by Lionsgate (they did the same thing with Ryuhei Kitamura’s English language debut Midnight Meat Train, adapted from the story by Clive Barker). The film deserves better. I spoke with Petty over the phone a couple of weeks before the April 21 DVD release.

Why a horror western?

I’m always trying to get a little bit outside the genre. I think people who watch scary movies now are such a sophisticated group of watchers. We’re probably the first generation that takes multiple viewings for granted, that you can see anything as many times as you want to see it. We’re sort of the video generation and the twenty-year-olds now just assume they can see anything they want anytime they want as many times as they want. So what’s already been done, we’ve seen so many times that I think it’s hard to actually scare people inside that framework. So once you get a little outside the genre, you can hopefully surprise people again.

What makes the combination of western and horror so resonant for you as a filmmaker?

A lot of it is just they’re two of the most cinematic experiences that you have watching a movie. If a horror movie does well, it’s entirely because of the direction, it’s classically not the performance. All the things that do make a horror movie pornographic also make it exceptionally cinematic. If you have a well directed horror movie with a crappy story and bad actors, it can still be a pretty awesome horror movie. And to some extent, the same thing with the western. All of those spaghetti westerns with dubbed voices and obvious cartoonish characters but have this amazing cinematic strength to them still resonate. So I guess horror and western movies are both, in a very specific way, the most cinematic movie you can make. Is that a fair statement to make?