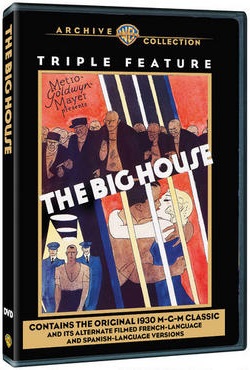 The Big House: Triple Feature (Warner Archive) is a special edition for the MOD (manufacture-on-demand) line.

The 1930 The Big House, directed by George Hill, is the original men-in-prison drama in terms of the way it established the conventions. There’s the pecking order of tough guys behind bars, the culture of loyalty, the sniveling snitches, the prison reform speech from the tough but committed warden (Lewis Stone, who is indeed tough), an inmate protest, a prison break and a riot. And through it all, Hill shows us the overcrowding, the regimentation of routine, and the numbing, soul-crushing oppression of the experience, from the processing of a newly-convicted prisoner (Robert Montgomery as a privileged kid completely unprepared to take care of himself here) to the predatory society within. Chester Morris is the leading man here as Morgan, a kind of underworld aristocracy thanks to his reputation as a criminal mastermind, and he comes off as a slightly darker, tougher, and more wooden Richard Barthelmess, the square guy rolling with tough breaks. Wallace Beery is the prison-yard bully Butch, who isn’t too bright but defers to Morgan, and Montgomery is nervous and sweaty as the wide-eyed fresh meat who ignores good advice and turns snitch, illustrating the warning given by the warden in the first scene: “Prison doesn’t make you yellow, but if you are already yellow, prison brings it out.” I guess we know his predilections.

The story is basically a roll call of what will become prison movie clichés but the presentation is striking. The mess hall scene presents mealtime in purgatory, with the inmates lined up in rows and columns with regimented precision, and the image is echoed at chapel, where the prisoners file in out of duty rather than faith. Meanwhile Hill contrasts the surface of resignation to the routine with the covert dealings below the table tops as inmates pass weapons and messages out of sight of the guards. The soundtrack keeps returning to the lock-step trudge of marching feet instead of music. And the warden responds to the occupation of a cell block by prisoners with overwhelming force: he calls in the tanks! It was nominated for Best Picture and Best Actor (Wallace Beery) and won Oscars for the sound and France Marion’s screenplay.

The Big House was previously released as a stand-alone movie on the Warner Archive line. The “special edition” of this release comes in the other two films of the triple feature: the French language version, directed by Paul Fejos and starring Charles Boyer as Morgan, and the Spanish language version. Both are shot on the same sets and utilize the same crowd shots, special effects, and even shot-lists and set-ups. The compositions are almost exactly the same, like an assembly line cranking out the alternate versions on a timetable, and the biggest difference is in the variations of characters brought by the actors and dramatic direction. Fejos seems constrained by the structure here—see his striking Hollywood work in the Lonesome disc set Criterion released last year (a triple feature in its own right) to see his eye for setting scenes and moving the camera—but he and Boyer turn Morgan into a much more charismatic figure, less hard-boiled, smoother and cooler, with a sense of authority that comes from confidence and ease. The Spanish version, from journeyman director Ward Wing (a sometime actor with a couple of shorts and documentaries to his credit as a filmmaker), hasn’t the same strength of character (Jose Crespo is a bland, unimpressive Morgan but Juan de Landa makes a strange mix of childlike clown and psychopathic bully as Butch) but the production value and the momentum keep it rolling along.

Three films on two discs. The print has seen wear and the contrast fluctuates a bit but it looks quite good considering the age and the era. The French and Spanish versions are not quite as well preserved but perfectly watchable and acceptable. The English subtitles are actually close captions and include notations on sound effects. 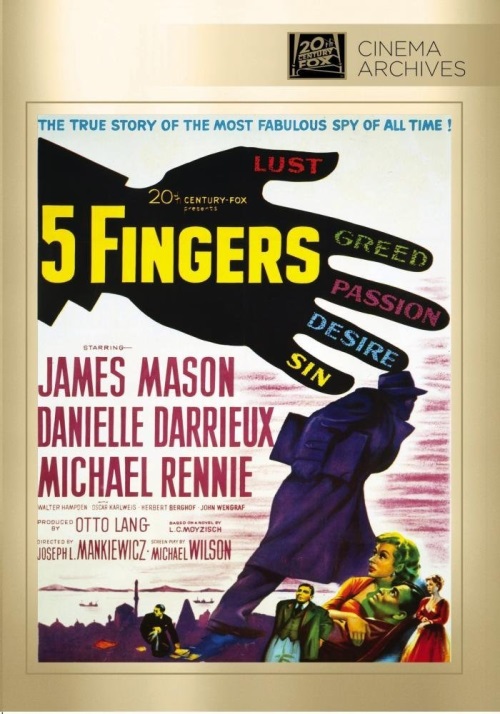 5 Fingers (20th Century Fox Cinema Archives), a smart 1952 espionage thriller directed by Joseph Mankiewicz, features James Mason in a superb performance as the contemptuous valet to the British Ambassador to Turkey during World War II. A career servant, he decides to make his fortune selling British military secrets to the Germans and enlists a penniless French countess (Danielle Darrieux), a woman he once served and still desires, to help him hide his money and provide a safe house. Based on real events from World War II, the 1952 film reworks the story and the players to make the valet, who is given the code name Cicero, a bitter, resentful British man determined to break through the class barriers. Mason plays him with smooth arrogance and cynicism, beholden to nothing but money and power. While he’s nakedly obsessed with class and status, everyone else is simply more subtle about it—this almost invisible valet is never once suspected by either side of being the leak in the embassy—and the Germans are so afraid that he’s actually a double agent that they never act upon the intelligence. Even the agent sent from London to find the leak (Michael Rennie) discounts him from his investigations.

The direction is low key, with a focus on the culture of the city of Ankara during the war (Turkey did not choose sides and Allied and Axis powers both had a presence in the city), the script full of sharp wit and clever dialogue, and the story is filled with delicious ironies. Mankiewicz did not receive screenplay credit but some of the dialogue surely came from his pen, such as the Countess saying to a civil servant: “Please don’t look at me as if you had a source of income other than your salary.”

The Fox Archive release has not been mastered in HD and it looks only slightly better than laserdisc quality, but it’s a good source print and is perfectly watchable. 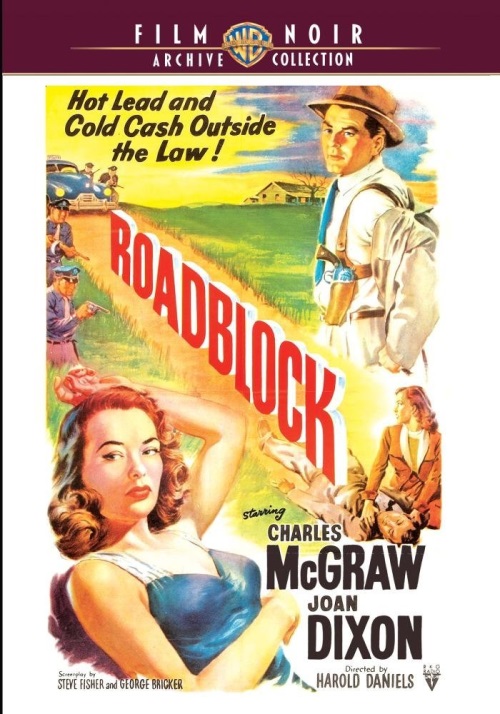 Roadblock (Warner Archive) opens with a set-up that promises a femme fatale siren thriller and a heist picture, and in its own way it defies both genres, or at least it takes a different twist. Charles McGraw is the hardcase of an insurance investigator, an incorruptible agent who earned the name “Honest Joe” but falls hard for a chiseling dame (Joan Dixon) looking to score a rich husband: “You’re a nice guy, honest Joe, but you’re not in the right league. I’m aiming for the World Series.” So he trades his integrity in for a crooked payday and ends up investigating the very robbery he masterminded while his partner (Louis Jean Heydt in soft-spoken conscience mode) starts to suspect him.

The 1951 picture is a film noir by definition, with its corrupted characters and mercenary femme fatale and atmosphere of a noose tightening around our anti-hero. Director Harold Daniels is no visual stylist and there’s a slackness to many of the scenes, but he comes to life in a nighttime murder scene that he transforms into a model of noir violence, an urban street fight in the dark of the empty city picked out in shards of light (credit likely goes to cinematographer Nicholas Musuraca, RKO’s crime movie vet), and the screenplay co-written by Steve Fisher has a bite of irony in its twists. And give the film credit for making a heist film work where we never see the heist; we’re checking in from McGraw’s honeymoon, which is also his alibi. The gravel-voiced McGraw carries the rest of the film with his working class integrity and moral judgments twisted into self-destructive panic when he becomes everything he despises just to impress a girl. Print quality is good.

More crooks, cops, and spies on MOD from Warner and Fox at Cinephiled

There’s an admirable modernity amidst the old-fashioned elegance of The Ghost and Mrs. Muir (1947), a romantic ghost story with a strong-willed young widow and the salty but gentlemanly spirit of a sea captain. Directed by Joseph Mankiewicz, a veteran screenwriter and producer whose wit and way with strong, striking characters guided his direction, The Ghost and Mrs. Muir was his fifth directorial effort but the first to pull all of his strengths together in such a charming and evocative way.

Gene Tierney is Lucy Muir, a beautiful young widow with a little girl (played by Natalie Wood) living in the oppressive home of her nervous, clingy mother-in-law and disapproving sister-in-law, a severe spinster whose every comment carries a critical judgment. Lucy is as independent-minded as a woman can be in turn-of-the-century England, an era when horse-drawn carriages still outnumber buggy-like motorcars, and this single mother chooses to leave London for the quaint little town of Whitecliff-on-the-Sea and Gull Cottage, a handsome old home perched on a cliff overlooking the coast. Tierney was more movie star than nuanced performer but she musters a quiet strength for this character. “Haunted. How perfectly fascinating,” she smiles as she makes her mind up, and soon she makes the acquaintance of its former owner Captain Daniel Gregg, played with a gruff, flinty manner by Rex Harrison.

Their first meeting is magnificent. On a stormy night, Lucy wanders downstairs into the kitchen with a single candle casting long shadows across the wall and highlighting those famous Tierney cheekbones that helped make her a glamorous leading lady in Laura and Leave Her to Heaven.