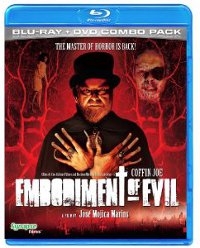 Jose Mojica Marins created Ze do Caixao (Jose of the Grave), known to English speakers as Coffin Joe, in 1963 with At Midnight I’ll Take Your Soul. This bizarre figure, a darkly fascinating mix of Dracula, demon, and Nietzschean superman who became kind of horror folk hero in his native Brazil, appeared in a number of films through 1979 but was the protagonist of only two films: Midnight and This Night I’ll Possess Your Corpse (1967).

Embodiment of Evil (2008) is Marins’ belated conclusion of what is being called the “Coffin Joe Trilogy,” following the mad killer as he’s freed from the psych ward of a high security prison after serving 40 years. Now he’s also the dark priest of a Manson-like cult and, aided by hunchback assistant Bruno (Rui Resende), he picks up where he left off, looking for a perfect woman to bear his child. Taking up residence ostensibly in a favela on the outskirts of Rio (which looks more like an inner-city slum than the honeycombed hills of shacks and stairs of the crime-infested favelas seen in City of God), the film at first looks like he’s going to go all Walking Tall as he stands up to both the gangsters and the corrupt cops of his new home. But soon enough he’s back to spreading his terror and torture to anyone in his orbit. Coffin Joe is indeed an equal opportunity predator.

Imagine Aleister Crowley by way of the Marquis de Sade with a theatrical flamboyance, a voracious blasphemer in a Catholic culture who torments and tortures women (both willing and unwilling) ostensibly to test their worthiness to bear his spawn but probably more because he’s just a sick SOB. He sews one woman up in a corpse of a pig, feeds another a raw steak sliced off her own naked flank which she devours eagerly (that may just be a drug-induced hallucination, but then you could say that about the whole film) and sews their eyes and mouths shut. And those are the members of his cabal. His enemies he hangs from flesh-piercing hooks and skins alive.