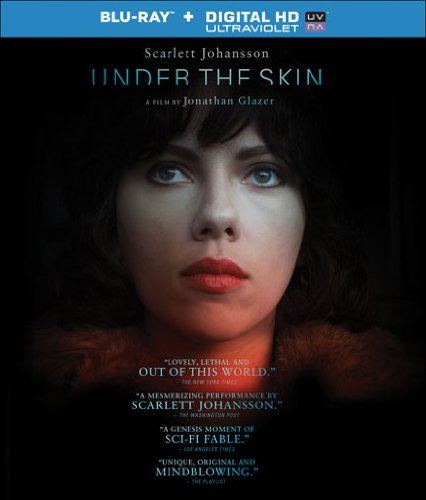 Under the Skin (Lionsgate, Blu-ray, DVD, Cable VOD) isn’t a film that wants to make things easy for the viewer. The experience is not unlike that which I suppose its unnamed protagonist, an alien reborn in the body of a human host (Scarlett Johansson), goes through as it (she?) settles in to its new body and the emotions and impulses surging through it that collide with its mission. That mission has something to do with driving around Scotland and picking up men that it appears to devour in a pool of lightless liquid. That’s my best guess—there’s no exposition or explanation to clue you in to what it all means—but it’s all quite strange and beautiful and weird.

This is the first feature from Jonathan Glazer since Birth (a film that had its share of critics but has grown to almost cult stature in some circles since its 2004 release) in part because he did not want to compromise his vision. The film opens on abstracted sounds, like a human voice learning its sonic possibilities, and enigmatic imagery, and Glazer expects us to create our own meaning from the clues we take in along the odyssey. The defining color is black, the inky night of her nocturnal hunts and the deep, bottomless dark of her alien retreat. The characters seems to float untethered in these scenes, as if they’ve slipped into another reality.

Glazer is less interested in the what and the why than in the texture of the experience, the intensity of the imagery, the sense of adaptation and alienation as this alien starts to connect with her victims. Johansson delivers a performance like she’s never given, slipping between a focused, unreadable blankness and the easy charm of a young Scottish woman chatting up the men she picks up in her van, a part she keeps perfecting as she gets a feel for the culture of Glasgow at night. (Some of the scenes were shot with a hidden camera as civilians were picked up by Johansson in character, like a reality show in the Twilight Zone, and Johansson is not only game for the stunt, she’s quite adept at it.) This is a film of sensations best experienced in an immersive environment; watch this on the biggest screen you are able to, with the lights out and distractions kept to a minimum, to best fall under its spell.

On Blu-ray and DVD, with “The Making of Under the Skin,” a 42-minute collection of brief featurettes covering various aspects of production. The production is as unconventional as the film story and direction and these featurettes share some of the process. The Blu-ray also includes an UltraViolet digital copy. Also available on Cable On Demand.

[Editor’s Note: The House Next Door is currently reissuing a series of articles developed at 24LiesASecond, a now-defunct platform for provocative criticism with an underdog bite. Author Robert C. Cumbow is a member of the Parallax View collective and his essays are being published simultaneously on Parallax View. The essay below was first published on 23/01/2006, under the editorial guidance of James M. Moran (editor-in-chief) and Peet Gelderblom (founding editor).]

We aimed to make something robust in which every question leads to another. I’m not a Buddhist and I don’t believe in reincarnation; I don’t think I could do a film about it if I did. I was more interested in the idea of eternal love. I wanted to make a mystery, the mystery of the heart.

You know you’re seeing something special from the very beginning.

In what you soon understand to be a prologue, but for now you take at face value, you hear the words “OK.” It’s a disembodied voice, a lecturer or an interview subject, apparently, but there’s no image, just a dark screen, so you don’t know who’s talking or why. “OK,” says the voice, “let me say this …” Potent words for the opening of a film. Maybe a little self-important, but let it go. For now anyway.

The voice goes on:

If I lost my wife and, uh, the next day, a little bird landed on my windowsill, looked me right in the eye, and in plain English said, ‘Sean, it’s me, Anna. I’m back …’ What could I say? I guess I’d believe her. Or I’d want to. I’d be stuck with a bird. But other than that, no. I’m a man of science. I just don’t believe that mumbo-jumbo. Now, that’s gonna have to be the last question. I need to go running before I head home.

Anything may be possible. But not likely. Class dismissed.

And now you hear music, an insistent repeating flute motif like the sound of a chirping bird echoes the bird-on-the-window metaphor of the lecturer. But these echoes of springtime are betrayed by the image that we at last see: Central Park in the snow, and a bundled, hooded man on his daily run. Bright light, cold air.

Setup 1 is a long following shot of the running man. This is a main title shot if ever there was one, since all we see is this man running in front of us. A good time to run the opening credits, but we don’t get them. Instead, all our attention is directed to the shot. Four dogs dart across the runner’s path. The runner enters a short tunnel and only then does the title appear: Birth.