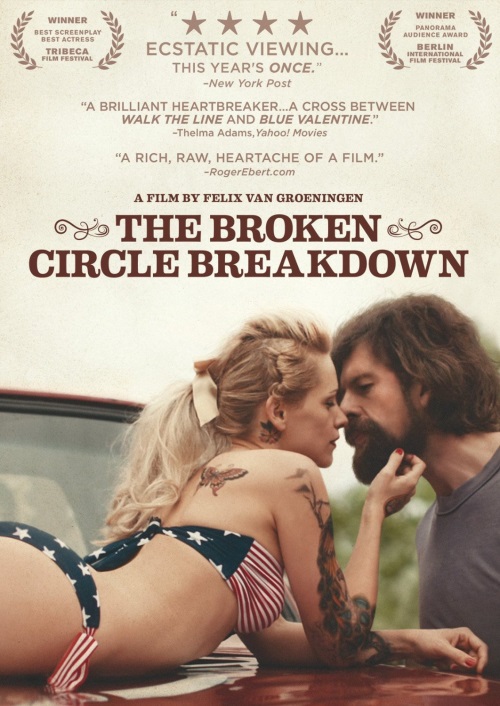 The title of the The Broken Circle Breakdown, a major hit in its native Belgium and an Oscar nominee for Best Foreign Language Film in the U.S., is a riff on the American country spiritual “Will the Circle Be Unbroken.” This is the story of a great love and a devastating loss, and it indeed confronts a breakdown, both figurative and literal, in the family circle. The song opens the film, performed by a bluegrass band in Belgium fronted by Didier (Johan Heldenbergh), a one-time punk rocker who fell in love with American roots music. He learned to play the banjo because it’s the closest instrument to the wail of the rock guitar. At least that’s how he explains it to Elise (Veerle Baetens), a tattoo artist who has turned her own body into a canvas for her work, on their first date.

That first date comes later in the film. Our introduction to Didier and Elise is in 2006 as they await results from a test that their young daughter Maybelle (Nell Cattrysse), named for Maybelle Carter of course, is undergoing. They are trying to hold it together to give their little girl all the strength and optimism they can muster. As this present-day drama unfolds, we slip back seven years to the early, heady days of their romance. It’s practically love at first sight and they form an instant connection; the way the flashbacks jump through their life together, it looks like she moves in the next day. Their personal harmony is picked up in the band, where she joins the ensemble in duets with Didier, then as a lead singer and guitar player. His stunned, defensive reaction to the news that she’s pregnant is the only sour note of their love song and he quickly recovers by starting a verse.