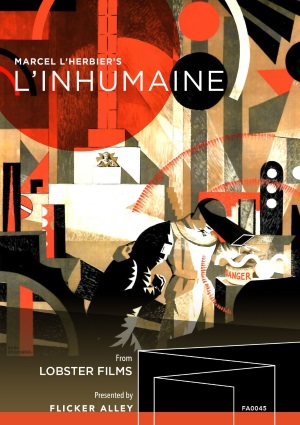 The 1923 French feature L’Inhumaine (Flicker Alley, Blu-ray), which translates to The Inhuman Woman, is not exactly about a femme fatale, though singer and social diva Claire Lescot (played by real-life opera star Georgette Leblanc) does enjoy the power she wields over the rich and famous men who attend her exclusive salons. They compete for her attentions and affections, which she withholds with a twisted smile. Leblanc doesn’t quite convince us of her overpowering charms—she’s confident and even commanding on the screen playing the arrogant superstar but she radiates little sex appeal—but then the melodrama itself is a conventional construct used to show off director Marcel L’Herbier’s ambitions. There’s a suicide, a scandal, a romance, and a resurrection, plus jealousy and vengeance, and forgiveness rolled through the two hour drama.

Jaque Catelain plays the young engineer and scientist Einar Norsen, a figure of youthful idealism and emotional impulsiveness who proves to be much more formidable and visionary than his initial impressions suggest. His angular face could be carved from stone and he cuts a striking figure in both his tuxedo and his laboratory coveralls, which look more like a space suit than a jumpsuit. His amazing laboratory all but wins the heart of Claire, who proves less inhuman than simply arrogant and haughty. But she also has a stalker or two among her spurned suitors and they plot their revenge against her, one of them in a plot that he could have stolen from Fantomas.

L’Herbier, the director of The Late Mathias Pascal (1924) (released on Blu-ray and DVD by Flicker Alley in 2012), was a modernist and an innovator in the lively culture of French cinema in the twenties. L’Inhumaine is, as the credits read, “A fantasia by Marcel L’Herbier,” and he gathered an impressive collection of collaborators. The modern mansions (seen from the outside as delightful miniatures, complete with toy cars crawling past to park) are designed by architect Robert Mallet-Stevens with the interiors given expressionist grandeur by future filmmakers Alberto Cavalcanti and Claude Autant-Lara and a magnificent fantasy of a modern laboratory, more spectacular than functional with its moving parts and electrical arcs zapping across the screen, designed and constructed by painter Fernand Léger, who also designed the animated credits. The next year he made his own directorial debut with the avant-garde classic Ballet Mécanique (1924). These elements are marvelous but it’s L’Herbier who brings it all together with cinematic brio and dazzling visual intensity.

The film has been tinted as originally conceived by L’Herbier, using archival notes. Features French intertitles with English subtitles, choice of two excellent musical scores (both newly composed for this release), and two featurettes, plus a booklet with notes on the director and the film.