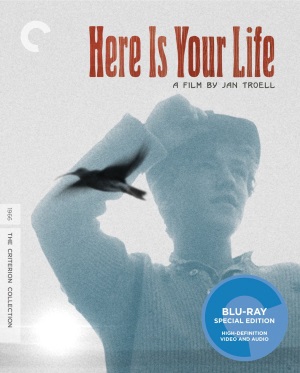 Here Is Your Life (Criterion, Blu-ray, DVD), the 1966 feature debut of Swedish director Jan Troell, is ambitious by any measure: an epic (over two-and-a-half hours long) coming of age drama based on the semi-autobiographical novels by Nobel Prize-winning author Eyvind Johnson set in rural Sweden during the years of World War I.

It was also a response to the symbol-laden, psychologically heavy cinema of Ingmar Bergman, which was pretty much all the rest of the world knew about Swedish cinema in the early sixties. Here is Your Life, the feature debut of Jan Troell, was part of a new wave of Swedish cinema. Not quite Sweden’s answer to the nouvelle vague, it nonetheless ushered in young (or at least younger) filmmakers and different approaches, from the passionate romanticism of Bo Widerberg’s Elvira Madigan to the freewheeling intimacy of Vilgot Sjöman’s I Am Curious – Yellow, both 1967.

Framed in those terms, Here is Your Life is a fresh take on the classic historical drama. Olaf (Johnson’s stand-in, played by Eddie Axberg) is a mere 13 years old when he leaves the farm of his foster parents (sent there because his real parents are too poor to feed him) and sets out to make his own way in the world. The film follows him through his teenage years as he moves from job to job—he works at a lumber camp, a brick furnace, a sawmill, a movie theater, a travelling tent cinema, a carnival shooting booth, and maintaining the engines at a railroad yard—and schools himself by reading philosophy and attending socialist meetings.