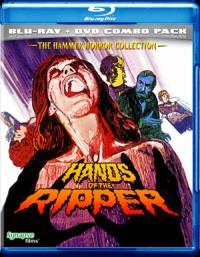 Hands of the Ripper (Synapse) is a remarkably accurate title.

While the 1971 Hammer horror only features the actual Ripper—a pox-ridden, diseased aristocrat who is flees an angry mob and murders his wife in front of his infant daughter—in the pre-credits sequence, the curse is passed down to his daughter. She grows up to become the delicate blond waif Anna (Angharad Rees) but when she’s gripped by the Ripper (either a literal possession or a trauma-triggered bout of schizophrenia), it’s not her hands that reach for the weapon. It’s those decaying, diseased hands of the first scene, as if the spirit of her father has taken over her form.

Directed by the Hungarian-born Peter Sasdy, who toiled on British TV for a decade before Hammer films gave him his feature debut with Taste of the Blood of Dracula (1970), Hands of the Ripper belongs to that era of Hammer horrors when their lurid gothic style had become suddenly outdated in the face of the new American horrors of George Romero and Wes Craven and the stylish violence of the Italian giallo, so they added sex and gore to stay current in an era of modern horror cinema. And while Ripper is light on the sex, it makes up for it with gruesome violence.

Eric Porter stars as Dr. John Pritchard, a well-meaning British psychiatrist and earnest student of Freud, determined to find to roots of violence within the mind of killers. Anna is his project, a meek, victimized girl he saves from a brothel and takes into his home, the better to understand the psychological forces behind her violent attacks. Pritchard is the film’s answer to Dr. Frankenstein, the dedicated (one might say obsessive) man of science willing to cover up a few inconvenient murders in the name of knowledge and personal experimentation. It’s only when it strikes close to home that he has the “what have I done?” moment. Anna, in turn, recalls the psychotic maniacs of Hammer’s sixties Psycho knock-offs by way of the female vampires of Hammer’s erotic horrors of the seventies, all the while maintaining her as the Victorian innocent corrupted by the sins around her. She’s more victim than villain, sent into murderous trances by triggers the film uses liberally to keep the body count going.