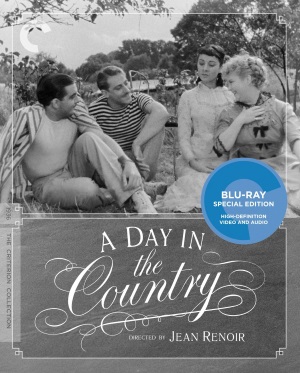 A Day in the Country (Criterion, Blu-ray, DVD) – Jean Renoir has long been called the cinematic successor to the French Impressionists—he is, after all, the son of Auguste Renoir, and his generosity and humanism and interest in the lives of working class folks is in the spirit of the movement. But while his style helped define French poetic realism of the 1930s, his films were also rooted in politics, class, and social commentary, both satirical (Boudu Saved from Drowning) and tragic (The Lower Depths, The Rules of the Game).

With A Day in the Country (1936), however, a short film adapted from a short story by Guy du Maupassant (a contemporary of his father), Renoir pays tribute to the French Impressionists in general and his father in particular. It’s set in 1860 at a bucolic riverside country inn on the Seine where a petit-bourgeois Paris family arrives (in a borrowed milk cart) for an escape from the city and a pair of brash men set their sights on seducing the giggly wife and the svelte, comely daughter of the easily-distracted husband.

It’s a bucolic little film with a wisp of a story that builds great emotional resonance from what appears to be a slight, meaningless dalliance. Like the Impressionists, there is great deal of life suggested behind those initial sketches, at least for some of the characters. Shots of this group having a picnic on the grass, women on swings, and couples rowing skiffs up the river, among others, evoke specific paintings of Pere Renoir while Jean’s gentle direction of his two leading actors create characters that are both familiar cultural types and unique individuals who are moved beyond all expectations by their brief encounter. It’s a portrait in the spirit of the paintings. Sylvia Bataille is especially luminous as the daughter, who is expected to marry her father’s dull-witted assistant but finds more excitement with the amorous country gentleman. Renoir himself plays the innkeeper and his lover and editor Marguerite Houlle Renoir is the waitress.