Ingmar Bergman looms so large in the cinema that we tend to forget he didn’t simply arrive a fully-formed artist, turning out ruminative, allegorical, emotionally intense masterpieces like The Seventh Seal (1957) and Wild Strawberries (1957) and The Magician (1958). Bergman found his first success on the stage; his first original screenplay, Torment, was produced in 1944 under the direction of Alf Sjöberg, a fellow stage veteran and a major influence. He directed his first feature, Crisis, in 1946. The man of the theater embraced cinema, but it took time to learn the expressive qualities of cinema storytelling, and moviemaking was his classroom.

With his tenth feature, Summer Interlude (1951), we can see the development of the mature Bergman, and with his twelfth, Summer with Monika (1953), his filmmaking sophistication catches up with his artistic ambition. Together they make a fine set showing the two sides of Bergman as a serious filmmaker: Interlude, steeped in metaphor and allegory and myth, and Monika, his first triumph in the psychological cinema of troubled souls and broken marriages.

The critical consensus is that Summer Interlude, the tenth feature from Ingmar Bergman, was a breakthrough for the filmmaker: his first film built around a strong, assertive, sure woman and the first shot extensively on location, where the natural world becomes a defining reflection of the lives of his characters.

This information comes courtesy of film historian and Bergman expert Peter Cowie, who has written extensively on Bergman and contributes the fine essay in the accompanying booklet to the Criterion release. I have much less experience with early Bergman, to be honest. It has been, in fact, the recent Criterion Blu-ray releases of classic Bergman films that has brought back to the director and introduced me to films I had never seen previously. It’s been a rewarding rediscovery of a director that I confess I have respected more than I’ve appreciated, in no small part thanks to the sheer beauty of the Criterion presentations. The cinematography of Gunnar Fischer has long been overshadowed by Bergman’s legendary collaborations with Sven Nykvist and the distinctive winter light of his images, but Criterion’s superbly remastered discs remind us of the beauty of his work, from the sunny, lush warmth of his summer interludes to the gray, foggy cloud of urban life and the cold desolation of fall and winter.

The blush of summer and the death of autumn are defining moods of Summer Interlude. Maj-Britt Nilsson, one of Bergman’s most overlooked actresses, plays Marie, an emotionally distant leading dancer in a Stockholm ballet company. An envelope containing a handwritten diary sends her mind reeling back thirteen years, to sunny days of young love and freedom and the first stirrings of desire on a summer vacation on the archipelago islands near Stockholm. She’s 15 and an aspiring ballerina, staying in vacation manor home of her Uncle Erland (Georg Funkquist), whose flirtations are more unsettlingly lustful than avuncular, and long-suffering Aunt Elisabeth (Renée Björling). 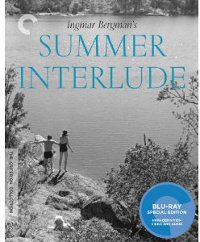 Summer Interlude (Criterion) and Summer With Monika (Criterion), the tenth and twelfth films (respectively) directed by Ingmar Bergman, make a fine match set showing off the two sides of Bergman developing in his early years as a filmmaker.

Summer Interlude (1951), the story of a summer romance between a sunny, confident young ballet student (Maj-Britt Nilsson) and a shy scholar (Birger Malmsten) on the lush vacation islands of the Stockholm archipelago, is a memory film. The older ballerina, now emotionally cocooned in regret and loss, is sent back to those free and easy days when she  receives a handwritten diary, and she revisits the island, now a cold, foggy corpse of its summer lushness, to come to terms with her past.

Lovingly shot by Gunnar Fischer, Bergman’s first great cinematographer collaborator, the film is steeped in metaphor: a philosophical rumination on love and loss staged as a story, with characters more like archetypes in a theatre piece. Summer is the charge of youth in the idealism of eternal vacation and the innocence of young love in all its dimensions. 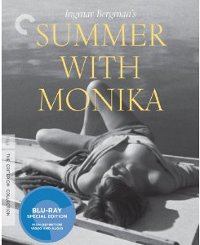 Summer with Monika (1953), starring Bergman’s first acknowledged muse Harriet Andersson as the impulsive, anxious, immature young Monika, is more about the complications, the rough edges, the unseen complications in a young couple after the bloom of sexual charge gives way to living in the real world.

Here, summer is less a metaphor and more of the literal time of year that allows these working teenagers to flee the city and live on the islands of the archipelago without a care. For Monika, it is an escape from the reality of the city – her family, her job, the dull life of a working class girl – and only the reality of supplies and food and the onset of autumn’s cold weather drives her back from this ambivalent self-made Eden and back to the material world of Stockholm.

Both are miniatures, studies in character and idea, small in scope and ambition, full of lovely moments and delicate performances. Bergman is finding his themes and learning to express himself and they both feature with moments of grace They don’t have the depth or the breadth or the richness of his great films, but his growth as a filmmaker is apparent in these jump between these two films. Where “Interude” is lovely but sophisticated sketch for films to come, “Monika” brings the real world into Bergman’s world and the tensions create a more powerful and resonant film.

Both debut on Blu-ray and DVD from Criterion. Summer Interlude features no supplements beyond a booklet with an essay by Peter Cowie. Summer with Monika features an introduction by Ingmar Bergman (recorded in 2003), a new video interview with actress Harriet Andersson conducted by Peter Cowie, half-hour documentary Images from the Playground by Stig Björkman (featuring behind-the-scenes footage shot by Bergman), and an interview with film scholar Eric Schaefer discussing the original American release of Summer with Monika as an exploitation film, cut down and dubbed by Kroger Babb and released as Monika: Story of a Bad Girl.

Arguably the most famous of Ingmar Bergman’s films and certainly his most iconic, The Seventh Seal is Bergman at his most allegorical. Max von Sydow, young and blond and heroic, is a disillusioned knight returned from the Crusades in a state of spiritual desperation: his faith has been shaken by senseless death and terrible cruelty he’s seen perpetrated in the name of a silent God. Coming home to find his own country ravaged by the Black Plague doesn’t help matters much and as he searches for some sign of a benevolent God, he plays a game of chess with Death (Bengt Ekerot), personified as a cloaked figure with a grim white face. Gunnar Björnstrand is his skeptical squire, suspicious of religion that plays upon and encourages the blind fears of a superstitious population and cynical about a culture that values human life so cheaply.

The landscape in the opening scenes mirrors the harsh reality of his existence: rocky, cold, with jagged cliffs that look torn out of the land, scrub grass hills with scraggly trees. Only in the domestic scenes of Jof (Nils Poppe) and his family, wife Mia (Bibi Andersson) and infant son Mikael, does the sun come out to warm their world with anything close to hope. And it’s that warmth, that hope, that promise of the future the knight sees in their love and their laughing child, that he is able to save by his simple sacrifice.

As I remembered from college, it’s full of heavy themes about faith and loss, about the meaning of life and the fear of death, with a lugubrious and introspective knight trying to hold onto his idealism in the face of a grim world and an unforgiving existence. What I had forgotten was the details: religion is a grotesquery of death and suffering, the strange and the sick are accused of being in league with the devil and are executed while the trembling devout lash themselves in penitence, offering their suffering as proof of their devotion, or as a sacrifice to a merciless God in exchange for sparing their lives. “They speak of Judgment Day,” says one. Things have not changed in 50 years or 500 or 1000 years.